Interested in lithium stocks? This face-off should help you make investment decisions in this space, whose growth is being driven by the increasing popularity of EVs.

We're going to compare the fourth-quarter performances of the lithium businesses of the three largest producers of the metal that trade on a major U.S. stock exchange: Albemarle (ALB -3.63%), Sociedad Quimica y Minera de Chile (SQM -2.09%), or SQM, and Livent (LTHM -3.54%).

Livent is now fully separated from FMC, via an initial public offering (IPO) in mid-October, followed by FMC's spinoff of its remaining ownership stake in its former lithium business earlier this month. It's a pure play on lithium, while Albemarle and SQM are not, so their overall results will also be affected by how well their other businesses perform. Nonetheless, this comparison should still help you make investment decisions in the lithium space.

For context, lithium stocks were standout performers in 2016 and 2017, driven by soaring demand for the metal to make batteries for electric vehicles and supply that couldn't keep up. They struggled last year because of concerns that increased capacity coming online would cause an oversupply situation to develop sooner, rather than later, which would cause lithium prices to decline. In 2019, shares of Albemarle, SQM, and Livent have returned 7.8%, negative-0.3%, and negative-6.4%, respectively, through March 22. The S&P 500 has returned 12.3% over this period. 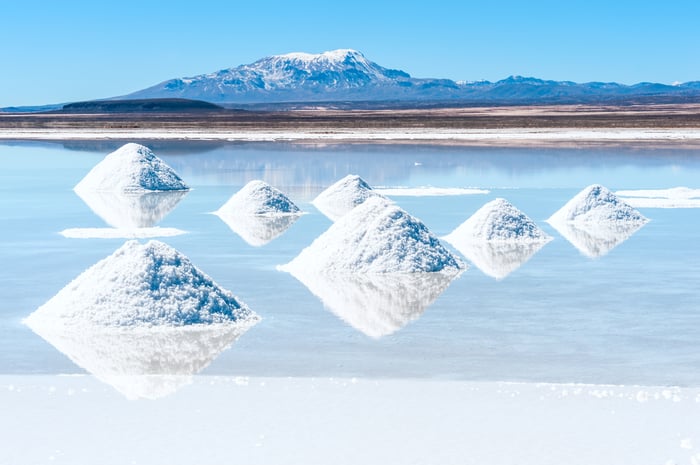 Data sources: Q4 2018 earnings reports.
*Livent's Q4 results were reported by FMC, since Livent was not a separate entity for the entire quarter.

SQM CEO Ricardo Ramos said in the company's earnings release that "we believe that demand growth surpassed 25% in [full-year] 2018, led by growth in the electric vehicle market."

Data sources: Q4 earnings reports except as noted.
*EBITDA = earnings before interest, taxes, depreciation, and amortization.
**SQM's result had to be calculated by subtracting its lithium business' earnings for the first nine months of 2018 from those for the full-year earnings; the year-over-year change was then determined after calculating the Q4 2017 result in the same manner.

Albemarle's lithium business experienced an increase in profitability from the year-ago period, whereas the other two companies had declines. In its earnings release, Albemarle attributed this profitability improvement to higher sales volumes along with an average 4% rise in lithium prices compared to the fourth quarter of 2017. The price increase did, however, slowdown in the quarter, as the price rise for full-year 2018 was 9% year over year.

The companies aren't using the same metric to measure the profitability performances of their business segments. So you may want to place greater weight on each company's percentage change, rather than their absolute earnings results.

SQM has historically been considered the lowest-cost producer of lithium, so Albemarle's showing here is particularly impressive. Profit margin reflects the efficiency of a company's operations and/or the mix of the products it sells. That said, the same caveat as above also applies here: The companies aren't using the same metric to measure the profitability of their segments.

Winner: Livent, if one wants to invest in a lithium pure play.

This category doesn't lend itself well to choosing a winner, though for investors looking for a pure play on lithium, Livent is the only choice.

Albemarle's and SQM's lithium businesses accounted for quite similar portions of their overall businesses with respect to revenue and earnings. In other words, the two companies' degree of "pure playness" isn't materially different. So when choosing between the stocks of these two companies, investors should consider other factors, including the overall financial performance, projected earnings growth, and risk level. As to the latter, Albemarle is the least risky of the two because it's a U.S. company, whereas SQM is based in Chile, so it has increased political and financial risks.

Check out the latest earnings call transcripts for Albemarle, Sociedad Quimica y Minera de Chile, and other companies we cover.

And the winner is... Albemarle

Albemarle emerges as the winner in this metric face-off, as it scored 3 points to SQM's 2 points and Livent's 1 point. With that said, Livent's growth profile could change quite a bit now that it's an independent company.

Of course, this is just a brief quantitative look and the following caveats apply: qualitative factors can matter at least as much as quantitative ones and the future is more important than the past.