But the effort probably won’t move the needle for HP anytime soon.

HP's (HPQ 3.37%) stock has tumbled about 20% over the past six months as the world's second-largest PC maker struggles with decelerating sales of its PCs and printers. However, HP has also been spreading out its bets by dabbling in other markets like virtual reality headsets. After all, global shipments of augmented and virtual reality headsets could rise from 8 million devices in 2018 to 52 million in 2022, according to CSS Insight.

Looking to tap into that growth, HP recently unveiled the HP Reverb VR headset, a high-end Windows Mixed Reality headset that sports a 2160 x 2160 pixel resolution per eye (giving it a combined 4K resolution), a 114-degree field of view, and "inside-out" tracking, which tracks movements with a headset's own cameras instead of ones awkwardly placed around a room. That's all in a light 1.1-pound package. 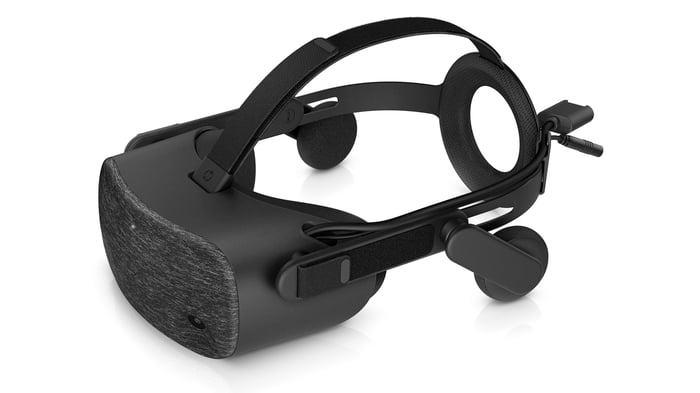 The consumer version costs $599, and the Pro version, which includes a cable for the HP Z VR backpack (its high-end, VR-ready PC in a backpack) and a fabric face mask, costs $649.

The Reverb's 4K resolution and wide field of view allow it to offer high-fidelity VR experiences, and make it one of the most powerful headsets on the market today. However, it's pricier than HTC's (HTCKF 0.00%) Vive and Samsung's (NASDAQOTH: SSNLF) Odyssey+, which both cost about $500. Facebook's (FB 4.24%) original Oculus Rift costs $349, while HTC's professional-grade Vive Pro costs $1,000.

HP is clearly trying to leverage its reputation as a top PC maker to challenge those high-end headset makers. But will the Reverb remain a niche device as the market pivots toward less-powerful stand-alone headsets like Facebook's Oculus Quest and Oculus Go?

Why is HP launching a high-end VR headset?

HP generates its revenue from two core businesses: personal systems (PCs and workstations) and printers. Here's how those businesses fared over the past five quarters in terms of year-over-year revenue growth.

HP's PC sales hit a brick wall last quarter due to tough competition, longer upgrade cycles, and a production bottleneck caused by an ongoing shortage of CPUs. Its printer division struggled with sluggish hardware demand in Europe, the Middle East, and Africa, and competition from producers of generic printer supplies.

With both of its growth engines sputtering out, HP needs to launch new products to boost it sales. For the personal systems business, this means introducing new convertible Envy laptops and Omen gaming PCs, which are tethered to its Omen game streaming service.

The introduction of the Reverb complements HP's gaming push, and the company might eventually bundle the headset with its Omen gaming PCs. However, two issues that hurt demand for the Rift, Vive, and other high-end headsets will likely prevent the Reverb from gaining much steam.

First, its price tag is too high for mainstream consumers, who can buy a decent gaming PC, two gaming consoles, or a smartphone for the same price. Second, the Reverb needs to be tethered to a VR-ready gaming PC, which costs at least $500 and restricts a user's movements.

HP is trying to address the mobility issue by tethering the Reverb to its HP Z VR backpack, but the wearable PC costs $4,000, and the combination is much more cumbersome than stand-alone headsets like the Oculus Go or smartphone-based ones like Samsung's Gear VR.

Therefore the Reverb and the HP Z VR backpack might be an acceptable setup for certain tech demos or enterprise uses, but it's highly doubtful that mainstream consumers will spend $4,600 to experience cutting edge VR content.

It won't move the needle for HP

The six best-selling VR headsets of 2018 were the PlayStation VR, Oculus Go, Oculus Rift, Gear VR, Vive, and Vive Focus, in that order, according to SuperData. However, none of those devices came close to surpassing a million shipments per quarter during the year.

The strength of Sony's (SONY 2.55%) PSVR can be attributed to the fact that it had a built-in market with the PS4, and developers were eager to spice up their games with VR features. The success of the Oculus Go indicates that consumers want cheaper headsets that aren't tethered to PCs or smartphones. That's why SuperData expects the upcoming Oculus Quest, which upgrades the Go with a faster chip and positional tracking features (which track a user's position with internal cameras), to hit 1.3 million shipments in 2019.

HP's focus on the high-end, PC-bound VR market restricts it to competing against Facebook, HTC, and Samsung in the much smaller niche market of affluent tech enthusiasts and enterprise customers. HP probably avoided a cheaper stand-alone device for two reasons: It lacks the mobile expertise, and a stand-alone device wouldn't complement its gaming PC efforts. However, it also means that the Reverb probably won't move the needle for HP's personal systems business anytime soon.