The short history of DowDuPont (NYSE:DD) is entering its final chapter, as the company formed by the $130 billion merger between Dow Chemical and DuPont in September 2017 nears a three-way split.

Check out the latest earnings call transcript for DowDuPont.

The company's brief run has been unkind to investors. Shares of DowDuPont are down more than 17% since the merger's close, trailing the S&P 500 by more than 31 points. 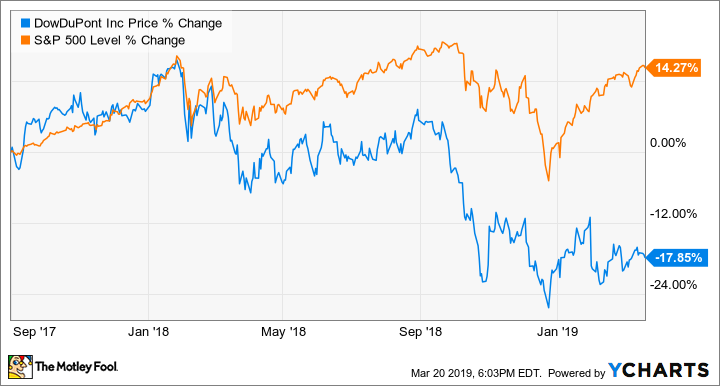 Will the next few years be any better for investors? Here's a peek at the outlook for DowDuPont to determine whether the company is a good buy at these levels.

Dow and DuPont came together under activist pressure in 2017 with a plan to combine the best of both portfolios and then create three streamlined entities. The combined materials sciences division, which will retake the Dow name, is expected to begin trading in early April. Corteva Agriscience, the combination's farm-focused unit, should follow on or around June 1, leaving a new stand-alone DuPont that will contain the companies' specialty products unit.

The ag business is about half crop protection products and half seeds, with a presence in more than 130 countries. Specialty products comprise advanced electronics and imaging materials, construction fibers, nutritional supplements, and advanced polymers for a range of industries, while materials sciences is a manufacturer of ethylene, propylene, and silicones used in consumer, packaging, and industrial segments.

DowDuPont CEO Ed Breen has a reputation as a master of corporate engineering, rescuing conglomerate Tyco International from near-collapse after Tyco chairman and CEO Dennis Kozlowski was accused of fraud. Breen eventually split Tyco into three businesses, and later further broke the unit he stayed with into three independent companies.

Some investors, notably activist Dan Loeb of Third Point LLC, have pushed for more of a breakup, with Loeb saying investors would be best served if DowDuPont splits into six pieces. Shareholders should expect additional portfolio trimming, and perhaps even mergers or large asset sales, in the years to come, with soon-to-be DuPont's nutrition business perhaps the most likely candidate to be sold or spun out on its own.

With the spin drawing near, the company has provided details about what the three units will look like as independents. The new Dow will easily be the largest of the three siblings, with about $40 billion in annual sales contained within a focused product portfolio that the company believes will be able to target 13% return on invested capital throughout the business cycle.

The materials business was the heart of the old Dow, and the company after going through the wash of a merger with DuPont and a spinout has shed about $14 billion in annual sales not related to its core business. It also picked up about $5 billion worth of legacy DuPont silicones and polymers that fit well into its new portfolio.

Current holders will receive one share of the new Dow for every three DowDuPont shares held at the record date. Dow intends to declare a cash dividend to be paid in June. 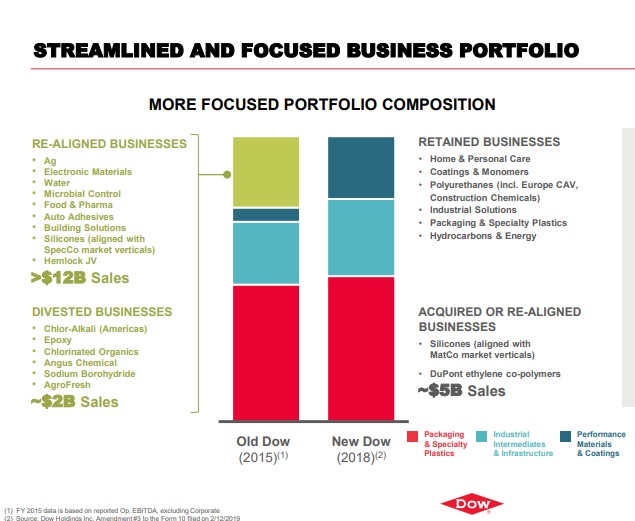 The Corteva agriculture business, meanwhile, weighed heavily on the combined company in 2018, with unit revenue falling 25% year over year in the first quarter of 2018 and then DowDuPont in October taking a $4.6 billion impairment charge related to the business. Bad weather and a poor planting season were responsible for the pressure early in the year, and declines in corn and soybean planting acreage exacerbated by the ongoing U.S. trade war with China and a corresponding fall in demand for soybeans continue to hang over the unit.

In the current year, Corteva expects total sales to be flat compared to 2018, with expected growth to be offset by about $350 million in currency pressure. The company's forecast calls for crop inventories to settle in 2019, allowing for commodity price stabilization during the year and setting the stage for growth beginning in 2020.

Finally, the post-split DuPont should have the highest operating margins of the three businesses, with projected strength in probiotics, semiconductors, aerospace, health, and industrial applications. It also by some estimates could pay upwards of 40% of net income annually in dividends.

Is DowDuPont a buy?

Right now, immediately before the split, is the worst time to buy DowDuPont. The company despite its share price decline is not cheap relative to other large chemicals manufacturers, so there is little chance to step in and get shares of the future Dow or DuPont at a discount due to the weakness in the Corteva business. 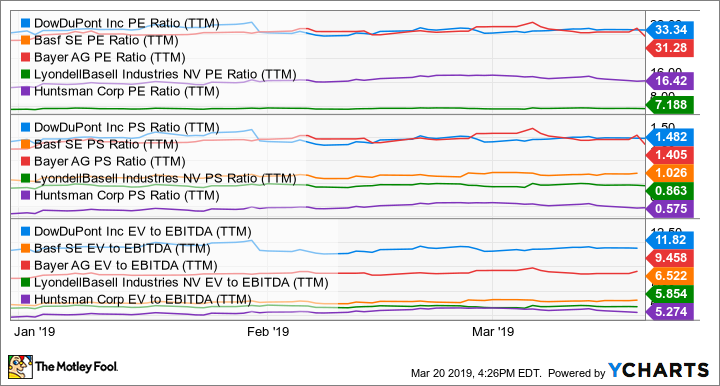 There's a case for buying all three of the eventual companies to come out of this split, but the attractiveness of the individual units will vary based on an investor's tolerance for risk and desire for growth or income. I personally intend to take a long look at the post-split DuPont, in part because of its outstanding margins and exposure to range of attractive end markets but also because that is where Breen will remain as executive chairman. By waiting, an investor will have a chance to pick and choose which business best fits individual preferences.

The merger of Dow and DuPont brought together an attractive set of assets that have now been streamlined and positioned to outperform. Just hold off for a bit before committing your capital to any part of the combination.