The company's track record should give investors pause.

Levi Strauss (LEVI 1.25%), the 165-year-old clothing company known for its iconic jeans, rejoined the ranks of publicly traded companies last week after a decades-long hiatus. The timing was just about perfect. Levi had an exceptional 2018, with both revenue and operating income growing at double-digit rates. That allowed the company to present itself as a growth story and seek a lofty valuation.

Levi priced its IPO at $17 per share, good for a market capitalization of about $6.6 billion. The stock rocketed higher on its first day of trading, closing out the week just above $22 per share. At that price, the company is valued at roughly $8.5 billion. 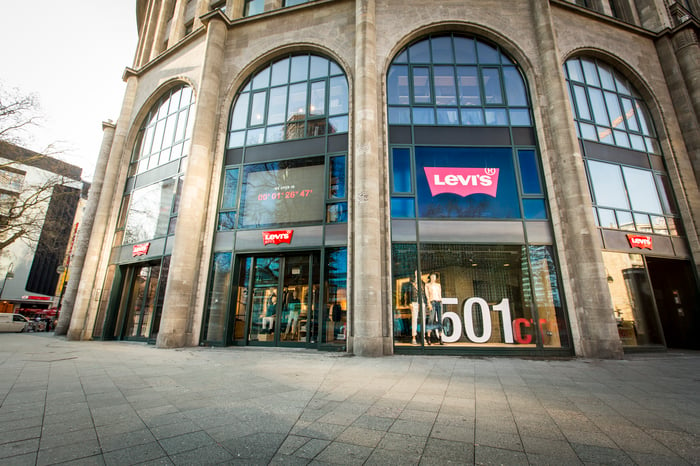 Based on 2018 net income, Levi trades at a price-to-earnings ratio of 30. That ratio falls to 20 if a one-time tax charge is backed out.

Paying 20 times earnings for a company that grew revenue by 14% and adjusted operating income by 13% last year doesn't sound so bad. The problem: A single year doesn't make a trend. The company's track record over the past 20 years tells a story of decline and stagnation, with some good years and some not-so-good years. Maybe Levi has finally figured out how to grow consistently. Or maybe not.

Levi produced around $5.6 billion of revenue in 2018, up from $4.9 billion in 2017. That growth is what the market has grabbed onto. But Levi is well past its peak. The company generated $7.1 billion of revenue back in 1996, and the years since then have been a struggle. 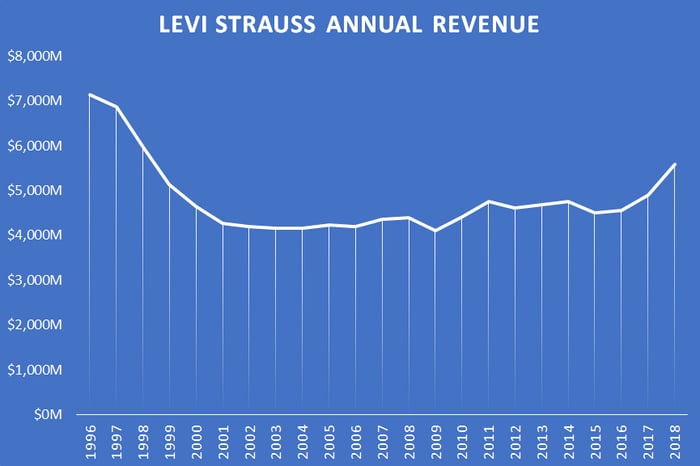 While revenue spent much of the past 20 years going nowhere, operating income was erratic. Levi was less profitable on an operating basis in 2018 than it was in a handful of years in the past two decades. 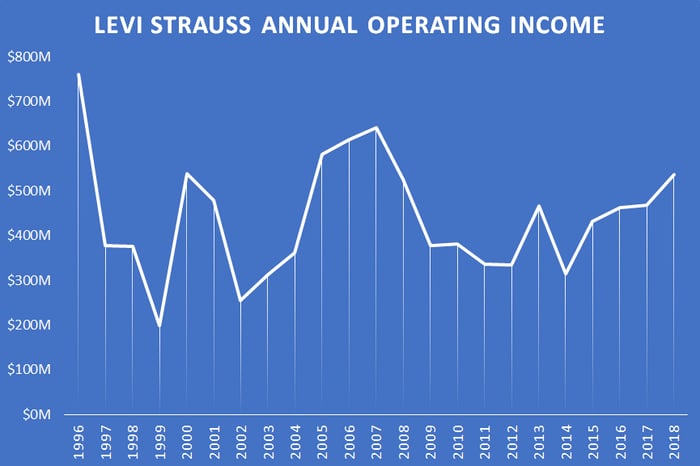 Is Levi suddenly going through a renaissance that will ignite a period of consistent growth? Probably not. The core men's bottoms business grew by just 3% in fiscal 2018. The rest of the company's growth was driven by its diversification efforts. Levi is focusing on growing its tops and women's businesses. Tops generated revenue of $1.1 billion in 2018, up 38%, while women's generated revenue of $1.6 billion, up 29%. There may be some overlap between those two categories.

Here's the issue: Levi's brand doesn't mean much if it's not on a pair of jeans. Levi has been associated with jeans for generations. The company is aiming to "reshape our global consumer perceptions from a U.S. men's bottoms-oriented company to a global lifestyle leader for both men and women," according to its S-1 filing. That's going to be very hard, and it may even hurt the brand if Levi's newer products aren't up to snuff.

If Levi's diversification strategy hits a wall in the next few years, sending the company back into the same stagnation pattern that it's been stuck in for two decades, paying 20 times earnings today is going to look pretty foolish in hindsight. Two-thirds of Levi's revenue comes from wholesaling to retailers; the upheaval in the retail business isn't going to help the cause.

One good year was enough to convince the market that Levi stock deserves a premium valuation. But investors shouldn't ignore the company's lackluster track record.