The payment-processing specialist revamped its e-commerce platform in order to integrate with Weebly.

Square (SQ -0.48%) acquired website builder and hosting service Weebly nearly a year ago. The company hasn't done much to integrate its core payments products with Weebly since the acquisition. "We've been working hard to make sure that we're introducing Square sellers to the concept of Weebly and vice versa," CEO Jack Dorsey said during last month's fourth-quarter earnings call. He added he wants to "make sure that people see these as one thing, and that's going to be our focus for the next few months."

Square recently revamped its Online Store product, and it integrates closely with Weebly. The new platform enables Square's brick-and-mortar merchants to easily expand to e-commerce by integrating its Retail and Restaurant point-of-sale systems with Online Store. Omnichannel remains a top priority for Square in 2019, and the Weebly integration ought to push it deeper into existing merchants' businesses and attract larger merchants to its ecosystem. 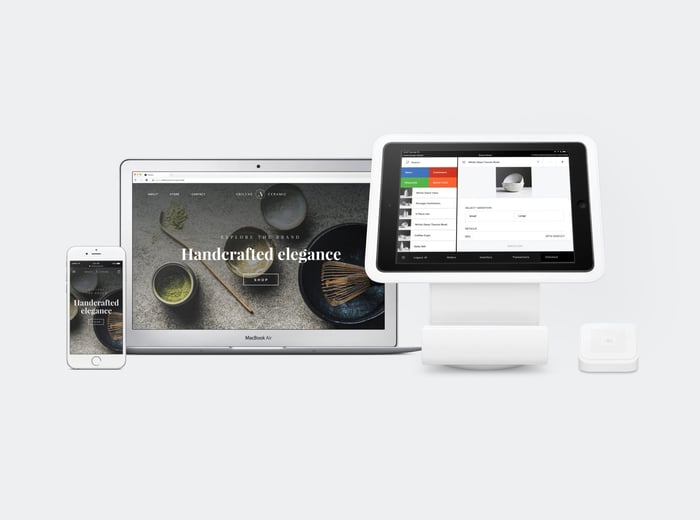 Square's goal as a company is to help its merchants never miss a sale. No matter how a customer wants to pay (credit, debit, cash) or where they want to pay from (in store, online, phone, invoiced) Square wants to be part of every transaction. As more and more sales move online, Square needs to develop more tools to help merchants complete sales over the internet.

Square has developed several e-commerce products recently, including a developer kit and API to integrate its payment processing into mobile apps. Online Store, however, is a service that makes it easy for anyone to set up a website and online store with just a few clicks. Weebly's platform is largely to thank for that.

Online Store will compete closely with Shopify (SHOP -1.25%), which offers similar tools aimed at small retailers. Shopify has tried to introduce in-store services for merchants, but its card reader and other services for in-person retailers haven't generated meaningful income. That said, Shopify has its own website builder and it's closely integrated with several popular e-commerce platforms and social networks.

Square's solution is tailored toward omnichannel sellers while Shopify may still appeal to online-only merchants. But Square may be able to attract aspiring online sellers with the promise of an easy transition to in-person retail if they ever take that step.

One of the keys to attracting larger merchants is a solid omnichannel offering. Larger sellers are more likely to sell to customers through multiple channels including multiple stores or online, so the easier Square can make it for those merchants, the more likely it is to win their business. Thirty percent of large sellers use more than one channel to make sales via Square.

So not only does a more robust e-commerce platform enable Square to stay attractive to its existing merchants, it also gives it another opportunity to win over and work with larger merchants on pricing that fits their needs and matches their values. That said, the ease of setting up an online store with Weebly and Square Online Store should make it equally appealing to small start-up retailers as well.