The jewelry giant still sees hope for another year of record sales in 2019.

Tiffany (TIF) recently closed out a solid fiscal year highlighted by a record $4.4 billion of global sales. But the luxury jewelry giant had some less exciting news for investors, too, including reduced profitability and slowing revenue growth.

These negative trends impacted Tiffany's results for the recently announced holiday-season quarter. They also played into a conservative outlook by the management team for fiscal 2019. 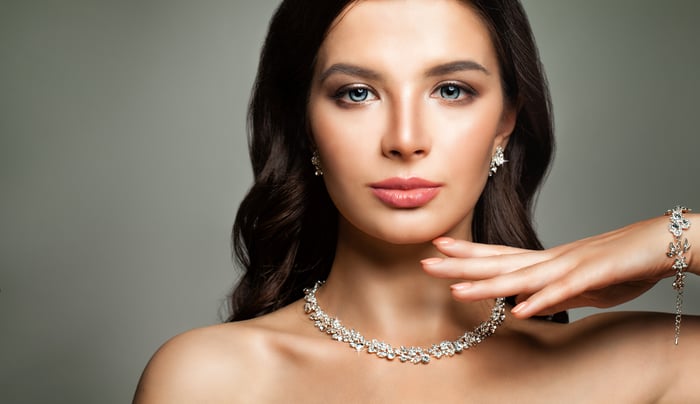 The headline numbers didn't convey many surprises, especially given Tiffany's post-holiday sales update in mid-January. Consistent with that announcement, the retailer saw weakening demand in many of its key markets. Sales were flat in the U.S. region, dipped slightly in China and Europe, and jumped higher in Japan.

Put together, these results left sales down 1% in the period, leading to just a 6% boost for full-year 2018. Yes, that marked a record result. But it was lower than the high-single-digit range that management had predicted months ago. Sales also landed toward the low end of the range that CEO Alessandro Bogliolo and his team issued in January. Executives said their results were again held back by softening spending on the part of foreign tourists, particularly Chinese travelers.

Tiffany's mid-quarter update didn't include profitability details, and news was mostly positive on this score. Gross profit margin inched higher -- as it has for over a year -- thanks to falling input costs, higher sales, and a shift away from wholesale diamond sales. Those gains were more than offset by higher selling expenses, though. The company's profit fell to $268 million, or 17.8% of sales from $311 million, or 20.3% of sales, a year earlier. Tiffany's full-year earnings landed at $4.75 per share, right within management's updated guidance range.

Executives sought to put the weakening results into big-picture context for investors. "Our team is proud of its accomplishments in 2018," Bogliolo said in a press release, "that contributed to net sales surpassing levels not seen since 2014." Still, he admitted that the company saw "softer trends in the second half of the year," that he said were driven by "uncertainties and market volatilities."

Stepping further back, Bogliolo said the retailer remains "in the early stages of a journey to achieve long-term sales, margin and earnings growth for this legendary brand."

Management's 2019 forecast reflects that unsteady march toward stronger results. Executives are predicting that sales will rise at a low-single-digit rate this year to mark a slowdown from last year's 6% increase. Earnings growth should be stronger, but investors will have to wait until the second half of the year for confirmation of that optimistic outlook. That's because Tiffany is expecting lower profits over the next two quarters as it continues to deal with the sluggish demand trends that pushed sales into slightly negative territory over the holiday season.

Management's outlook implies that these pressures will lesson as the fiscal year progresses, leading to better earnings and a second straight year of record sales. But investors will have to take executives at their word here since results over the last few quarters have pointed toward slower, not faster, sales growth.

Tiffany and LVMH Agree on Buyout Price; Lawsuit to Be Dropped
420%