Warren Buffett once said, "If you aren't willing to own a stock for 10 years, don't even think about owning it for 10 minutes." He was exactly right. And as a result, it makes sense to think about what the stocks you buy might look like 10 years from now.

My favorite big pharma stock is AbbVie (ABBV 2.03%). I have pounded the table on why AbbVie is a great pick for growth investors, income investors, and value investors. But I admit that some are worried about the company's prospects. Let's look at those prospects by taking Buffett's advice literally. Where will AbbVie be in 10 years? 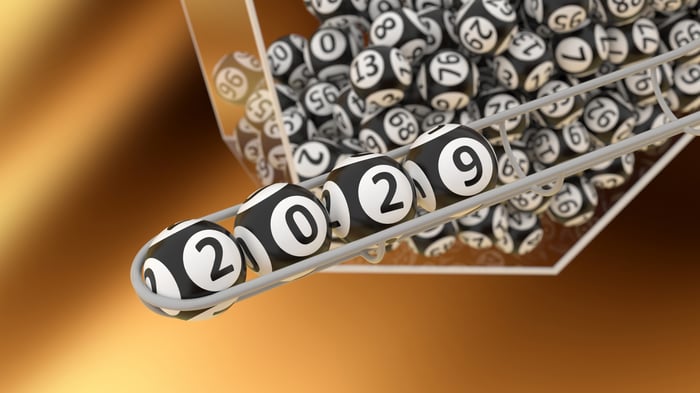 Humira in the rearview mirror (sort of)

Most of the worries about AbbVie right now center on the company's reliance on immunology drug Humira. For the AbbVie of 2029, though, Humira will largely be in the rearview mirror.

Don't get me wrong. I fully expect that Humira will still be raking in a lot of money 10 years from now. Market research company EvaluatePharma projects that Humira will remain the world's top-selling drug as far out as 2024 with sales of more than $15 billion. Those sales won't completely dry up overnight -- or even over the next four years.

However, Humira will face direct biosimilar competition in the U.S. beginning in 2023. Expect significant sales erosion to start then and continue for years thereafter. By 2029, Humira almost certainly won't be the best-selling drug in the world. It likely won't even be AbbVie's best-selling drug. But Humira doesn't have to rank at the top to still contribute significantly to the company's top and bottom lines.

I think AbbVie will remain at the top of the immunology market regardless of how rapidly Humira's sales deteriorate. That's because the big drugmaker has a couple of products ready to take the baton from Humira.

Risankizumab is likely to win FDA approval in treating psoriasis in April 2019. Within the next few years, the drug could also pick up approvals for treating other autoimmune diseases. By 2029, I think risankizumab could be generating annual sales of more than $4 billion.

My expectations are even higher for upadacitinib. AbbVie should obtain FDA approval for the drug in treating rheumatoid arthritis later this year. And there's a list of other indications that upadacitinib could add to the list in the not-too-distant future, including atopic dermatitis, Crohn's disease, psoriatic arthritis, and ulcerative colitis. It won't surprise me a bit if upadacitinib pulls in $6 billion or more annually 10 years from now.

I also agree with AbbVie president Michael Severino that some investors are underestimating the strength of the company's early stage pipeline. In particular, ABBV-599, which combines upadacitinib with a BTK inhibitor, could be a big winner by 2029.

Check out the latest earnings call transcript for AbbVie.

There's one prediction that I feel very confident in making: By 2029, AbbVie will be a much more diversified company than it is today. Its revenue will be distributed across more products. And the company will be a leader in more therapeutic areas.

As I already mentioned, AbbVie should continue to be a leader in immunology. I also expect it will increase its market share in oncology. Right now, AbbVie's lead cancer drug in Imbruvica. I suspect that the drug will be the company's top-selling product 10 years from now with sales of $7 billion or more. Venclexta is likely to also be a powerhouse for AbbVie as it picks up additional approvals in multiple myeloma and as a first-line treatment for chronic lymphocytic leukemia (CLL).

While Imbruvica and Venclexta are on track to be even bigger winners in treating various blood cancers, I think that AbbVie will gain some momentum in fighting solid tumors as well. Rova-T was admittedly a big disappointment, but AbbVie's pipeline includes several promising phase 1 drugs that target solid tumors. Whether it's through internal development or acquisitions, I feel pretty good about the company extending its oncology leadership.

Orilissa should have a good chance of becoming a blockbuster for AbbVie, especially if it wins approval for treating uterine fibroids in addition to its current approval for endometriosis. The drug should keep AbbVie in the thick of the women's health market. Despite lower numbers of patients, I also think that hepatitis C virus (HCV) drug Mavyret will still be a significant moneymaker for the company in 2029.

Don't be shocked if AbbVie emerges as a major contender in neuroscience, either. This area is more of a long shot for the company, though.

By virtue of its lineage as part of Abbott Labs, AbbVie belongs to the exclusive club of Dividend Aristocrats -- S&P 500 companies that have increased their dividends for at least 25 consecutive years. My view is that aristocrat isn't a strong enough term for AbbVie's dividend status, though. By 10 years from now, perhaps the more fitting description is that AbbVie will be a dividend king.

The company currently pays a dividend that yields close to 5.3%. AbbVie has increased its dividend by 168% since being spun off from Abbott in 2013. I fully expect the drugmaker will keep those dividend hikes coming.

Let's assume that AbbVie increases its dividend by an average of 10% each year (which is lower than what the company has done in the past). At that growth rate, by 2029 an investor who bought AbbVie shares today would receive an effective dividend yield (the yield on his or her initial investment) of more than 13%.

Back to the present

AbbVie is a bargain with shares trading at less than nine times expected earnings. It's poised for significant growth. It pays that solid dividend that we've already discussed. In my view, AbbVie is absolutely a stock that you can buy and hold for the next 10 years or more.