The market for the Internet of Things (IoT) has been slowly developing over the years, and now includes connected devices and automated systems for everything from agricultural equipment to autonomous vehicles. But since the IoT isn't a single tech product, it can be difficult for investors to understand how it's benefiting tech companies, and what the potential is for this growing market.

So to give some perspective on the IoT, here are a few important facts that investors should know about this fast-growing tech trend. 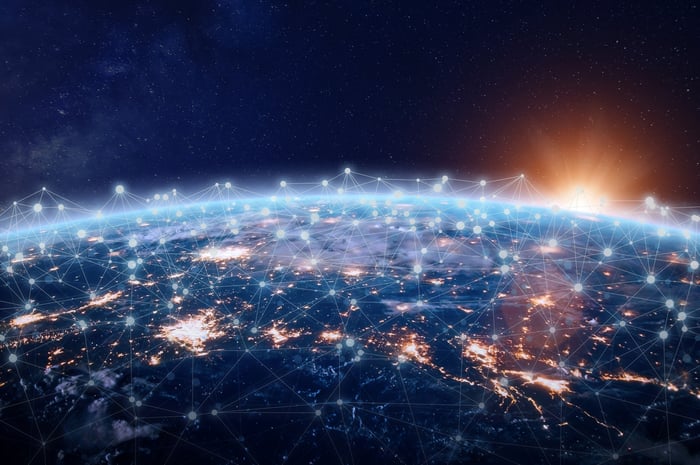 IHS Markit estimates that more than 33 million autonomous vehicles (AVs) will be sold annually in 2040. Right now that might seem like a long way off, but lots of progress is currently being made in the AV space that will help make this possible.

For example, NVIDIA (NASDAQ:NVDA) is already on the third iteration of its autonomous-vehicle platform called Pegasus, which will enable full autonomy of its test vehicles sometime this year. The company's use of artificial intelligence, onboard sensors, and cloud computing will help bring us one step closer to a self-driving future.

Similarly, Alphabet's (NASDAQ:GOOG) (NASDAQ:GOOGL) Waymo has already logged more than 10 million autonomous miles of driving, and launched the first-ever commercial autonomous ride-hailing service back in December. The company has plans to bring the service to more cities later this year. Right on its heels is General Motors (NYSE:GM); GM is growing its self-driving subsidiary, Cruise Automation, by doubling its headcount over the next nine months, and will unveil a self-driving car without steering wheels or pedals later this year.

Self-driving cars will need to be connected to the internet to enhance their data-processing capabilities, which can only be made possible on a grand scale through another part of the IoT: 5G networks.

To make autonomous vehicles a reality, new and faster 5G networks are being built. These ultrafast cellular networks are the next evolution in wireless communication. They'll not only pave the way for AVs, but also help usher in smart-city connections -- for more efficient parking services, traffic flow, and utilities -- soon.

5G is just beginning to be built out right now, but its potential is enormous. Verizon Communications (NYSE:VZ) says that 5G speeds will be up to 20 times faster than 4G LTE. Not only that, but the latency speeds -- how long it takes devices to communicate with cellular towers -- will be much faster. That means that new services like autonomous ride-hailing services and smart cities will be able to operate safely and efficiently, without the same lag time that current networks have.

Verizon will be one of the first U.S. cellular carriers to launch an official 5G network next month, and the company has plans to bring up to 30 cities online by the end of this year.

These new networks will help generate more than $619 billion in additional annual revenue for wireless carriers, and will allow for new services to come online that were never possible before.

Check out the latest earnings call transcript for NVIDIA and other companies we cover.

The artificial intelligence market is growing quickly, and some estimates say it could add $15.7 trillion to the global economy by 2030. But one of the most significant aspects of AI is its use in processing lots of data quickly -- and on devices that never collected data before.

It's why the Internet of Things and AI go hand in hand, and why just four years from now IoT devices (like cars, smart speakers, smartwatches, and agricultural equipment) will account for 83% of AI chips.

Why does the IoT need AI? Because without it, the billions of devices that will come online over the next few years would collect mountains of data but not know what to do with it. Research company Gartner recently said that "data is the fuel that powers the IoT" and noted that "AI will be applied to a wide range of IoT information, including video, still images, speech, network traffic activity and sensor data."

In short, billions of internet-connected devices will depend on AI to make sense of all the data they harvest, and that, in turn, will likely fuel growth in the AI chip market -- from about $4.5 billion in 2017 to $91.2 billion by 2025.

That's excellent news for NVIDIA, one of the leading AI chipmakers. The company's graphics processing units (GPUs) are used in AI data processing; as the artificial intelligence market balloons, their use cases in IoT devices are likely to expand as well.

Investing in the future of IoT

The Internet of Things may be harder to nail down than other tech trends, but that's because it's interwoven into so many new technologies, from 5G to autonomous vehicles to AI. The IoT is the umbrella that brings all of these technologies together. If you're looking for a way to bet on the IoT, look at the companies listed above, and at how each is implementing parts of the IoT in its own way.