Please ensure Javascript is enabled for purposes of website accessibility
Log In Help Join The Motley Fool
Free Article Join Over 1 Million Premium Members And Get More In-Depth Stock Guidance and Research
By Luis Sanchez CFA - Updated Apr 16, 2019 at 10:29AM

Cracker Barrel's largest shareholder wrote a letter asking for change, but will the company listen?

Cracker Barrel (CBRL -4.73%) is facing criticism from its largest shareholder. The iconic restaurant chain known for its Southern cuisine and rocking chairs received an activist letter from Biglari Capital, which owns 14.7% of the company. Biglari and Cracker Barrel have a tenuous relationship going back several years, which includes failed attempts by Biglari to gain board seats and sell the company.

Biglari's stature as the company's largest shareholder demands attention; however, the company has tried to ignore the activist in the past. It is possible Cracker Barrel will ignore Biglari's latest letter, but it is worth taking a closer look to see if his latest proposals make sense for the company.

Check out the latest earnings call transcript for Cracker Barrel.

Biglari's boldest proposal is to ditch the Holler & Dash restaurant concept. Holler & Dash is a biscuit-inspired fast-casual chain launched by Cracker Barrel in 2016. Biglari wants the company to sell or shut down the chain because the activist views it as a distraction that will not "move the financial needle" for the company.

Even if Biglari is correct in his assessment of Holler & Dash, it may not matter. Cracker Barrel's business has performed well, implying that management's execution has not been negatively impacted by the launch of Holler & Dash.

A good way to judge management's performance is to look at EPS growth over time. EPS growth measures how much a company has grown profits on a per share basis. As it turns out, management has overseen healthy EPS growth before, during, and after the launch of Holler & Dash. 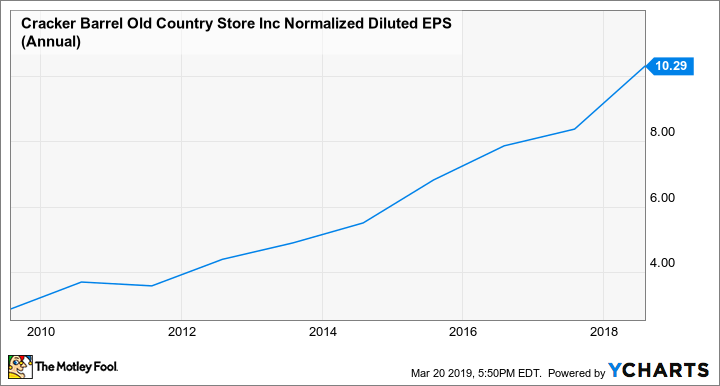 The strong results do not corroborate the activist's narrative that management has been distracted. Biglari likely would argue that Cracker Barrel would have done even better without the distraction from Holler & Dash, but that argument is akin to trying to disprove a negative. Unless the activist can point to underperformance in the business, their argument doesn't have strong merit. To the contrary, the business's strong performance gives management credibility to continue running things as they see fit.

Biglari Capital also calls for Cracker Barrel to enhance its financial disclosures so that investors can assess the profitability of new restaurants. At issue is management's claim that opening new Cracker Barrel restaurants has been a good investment.

The issue goes back to a prior dispute between the company and the activist. In 2011, the company told investors that it earned an annual return on investment of 16.2% for the 116 stores opened between 2004 and 2009. However, Biglari disputed this claim and argued that their own calculations suggested a much lower return.

Now, Biglari would like the company to separately disclose financial information for recently opened restaurants so that investors can get a better sense of the return on investment Cracker Barrel is generating on its new units. However, Biglari fails to provide data to back up their claim and the activist's request for additional information lacks specificity.

Cracker Barrel already provides fairly detailed financial disclosures. In its financial reports, the company separately categorizes costs between corporate overhead and different buckets of costs at the restaurant level. The level of disclosure provided gives investors a solid understanding of the company's profitability and business economics.

Providing more financial disclosure would give investors marginally better insight into the company, but there is something to lose. Some of this information could be considered competitively sensitive and provide rival restaurant companies an indication of where to build new locations. Ironically, going above and beyond the typical reporting requirements could be distracting as the company would need to prepare new investor materials and answer new questions that arise.

At the end of the day, Biglari's request whiffs of protest that the company has not given the investment firm representation on its board of directors. Board members likely would have access to more detailed financial information on store performance. Whether Biglari should have board representation is a separate debate, but it seems unnecessary for Cracker Barrel to provide an even greater degree of financial disclosure to the public. 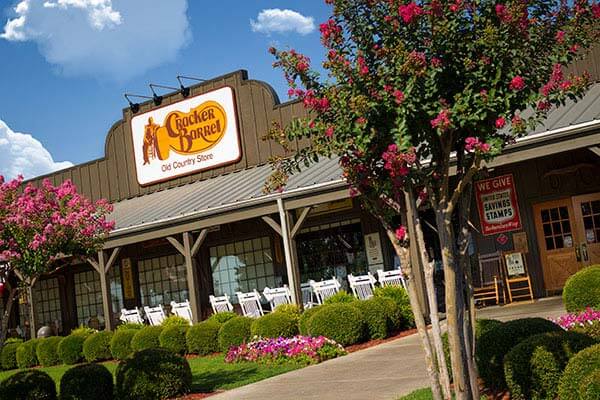 Biglari argues that a special dividend would be preferable to a share repurchase because Cracker Barrel's stock is not trading at a cheap price. Biglari is probably correct on this assessment. Cracker Barrel's stock price is near the highest level it has ever traded. If the company repurchases stock at the current level, it risks over-paying for the shares which would be less beneficial for shareholders than a direct payment through a special dividend.

The question of whether a company should pay dividends or repurchase shares is complicated and depends on a number of factors, some of which are subjective. In Cracker Barrel's case, it would have been better to repurchase shares before the run-up over the last five years. The stock doesn't appear as cheap as it once did in either price or valuation, bolstering the activist's case that a special dividend is likely more appropriate.

Will Biglari's letter change anything?

Biglari presents some interesting ideas regarding how the company should operate; however, Biglari's letter probably won't amount to much change. The bottom line is that Cracker Barrel's management team has done a good job in recent years -- perhaps in part due to the pressure from shareholders like Biglari encouraging a focus on operations and return of capital.

The company's strong financial performance and high stock price lend management credibility to continue operating the company as they see fit. This won't change unless the remaining shareholders have reason to complain.