It's not often a company's core business grows 35% and the market punishes the stock by sending it down over 10%. And yet, that's just what happened to Zuora (NYSE:ZUO) this week after it reported earnings.

The real culprit -- in my opinion -- has to do with expectations. Zuora is not following the increasingly well-worn path of other software-as-a-service (SaaS) companies. These peers routinely post 50%-plus revenue growth. Instead, it is taking a more deliberate approach -- and that means only patient investors should consider owning shares. 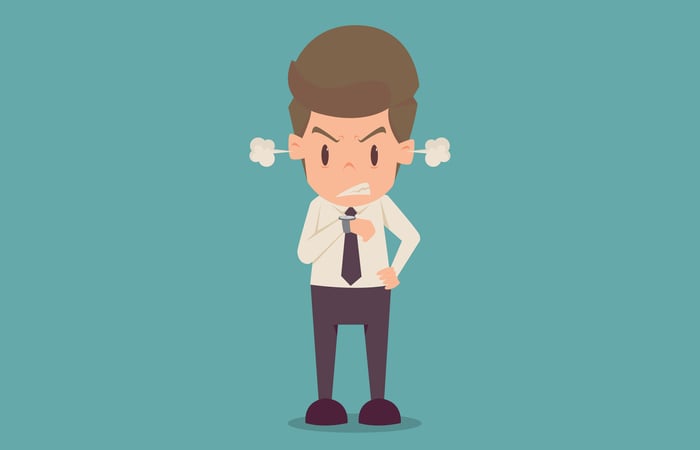 Before diving into the details of the company's quarter, let's review the headline numbers.

Some market commentators have zeroed in on the fact that revenue growth has slowed from 60% in the company's first quarter of last year to just 28% now. As I discussed in my earnings preview, however, that's very misleading.

Zuora gets paid to provide onboarding for its clients. But it offers this service at a slight loss. The value of the long-term relationship, management argues, is far greater than the losses associated with giving away this service for as little as possible.

As a result, it's far more instructive to focus on subscription revenue growth. On that front, the company posted a 35% jump from last year's fourth quarter. It's worth noting, however, that this represents a slowdown from 44% in Q2 and 43% in Q3.

Zuora also posted 27% growth for the year in the number of clients with annual subscription contracts over $100,000. And its all-important dollar-based net expansion rate clocked in at 112% -- the high end of management's guidance.

Even a few years ago, results like this -- showing a small deceleration in growth -- would be accepted with a shrug. When companies grow that fast, they are bound to be hit with the law of large numbers...right?

Well, a few of Zuora's SaaS peers -- like MongoDB, Twilio, and Okta, to name a few -- have routinely shown an ability to keep growth rates above 50% and introduce new products where sales explode almost immediately after hitting the market. Some of these players have dollar-based net expansion rates of near 150%!

Zuora, however, probably shouldn't be grouped in with companies like this. Let's explore why.

Let's use Twilio as an example. Its technology allows companies to communicate with their clients anywhere in the world via text, voice, video, or email. This is obviously something that lots of businesses are interested in. But -- and this is the key part -- simply testing out Twilio on a trial basis is relatively low-risk.

Say you own a delivery service and you want to let clients know when their packages will arrive. You can assign your department to kick the tires on Twilio and see how it works. If it performs well, that's great. You start onboarding your operations and -- over time -- you're essentially a customer for life. But if you don't like the platform, you can pay your usage fees and ride out your 12-month contract and try another provider.

The same is not true for Zuora. The company's two key products -- Zuora Billing and Zuora RevPro -- are designed to deal with the complexities of accounting in the subscription economy. Instead of one-off purchases that can be immediately recognized, subscriptions are based on a different fee structure entirely.

Here's the catch: To get customers, you have to convince them to fundamentally change the way they do business. Obviously, there's low-hanging fruit -- businesses that already operate on a subscription model. But Zuora can only meet its full potential if companies -- including legacy and existing ones -- make this shift.

That takes time, and a rather extensive sales force. But Zuora believes the long-term trends are decidedly on its side. It released a report the same day detailing how its subscription economy index -- its in-house tracking of sales growth of subscription companies -- has far outpaced the average S&P 500 company and U.S. retail in general over the past five years. 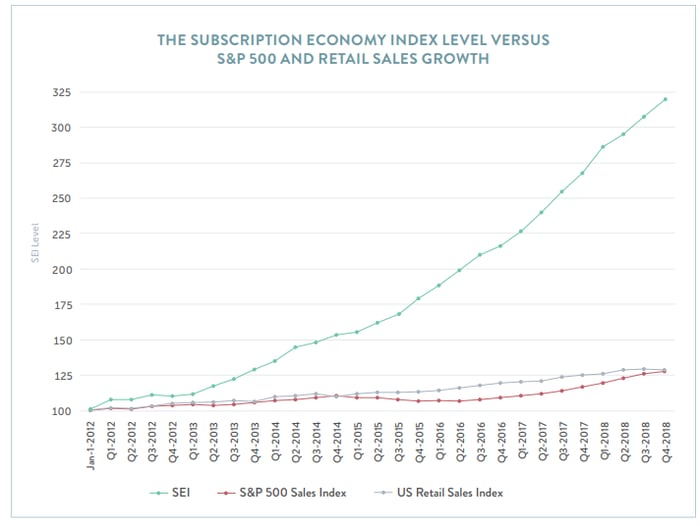 The takeaway is that -- according to Zuora's data -- the subscription economy it is looking to serve has grown nearly five times faster (18.1% per year) than these two benchmarks (about 3.7% per year).

As a result, management believes that Zuora can accomplish 25% to 30% growth per year for the foreseeable future. That's not as exciting as 50%-plus growth right now, but the companies showing that type of growth are bound to slow down eventually, and it could be more abrupt.

To put that kind of forecast into hard numbers, if Zuora were able to grow its subscription revenue by 30% per year for five years, it would increase 270% to $627 million (from $169 million in fiscal 2019). That's pretty hard to argue with.

Next year's forecast is pretty much in line with this view. Using the same accounting methods, subscription revenue is supposed to climb 27.5%.

At the same time, however, we should always be cautious about any management team making hard predictions like this so far into the future. While it's hard to wrap our heads around, the pace of technological change is accelerating. It's becoming tougher to predict what the world will be like next year...let alone five years from now.

That's why -- as a shareholder -- I'm comfortable with my 2% allocation to Zuora right now. I'm not selling after today's drop, but I'm not going to be adding shares either. Over time, if Zuora can fulfill its promise of consistent 25% to 30% subscription growth, the value of my shares will grow and I'll have ample time to add more.