But that only kicks the can of a license renewal a little further down the road.

MGM Resorts (MGM 0.77%) was granted a two-year extension on its Macau concession by gaming regulators in an effort to bring the expiration of its license in line with other casino operators whose licenses expire in 2022.

Many analysts expected the decision and believe the six big casino operators in China's gaming enclave will all win renewal of their licenses when authorities come up with a plan for putting the concessions up for bid again. Yet because there is no formal process in place and authorities may have to grant all the casinos an extension to their licenses, there remains a fair bit of uncertainty over what the ultimate outcome will be. 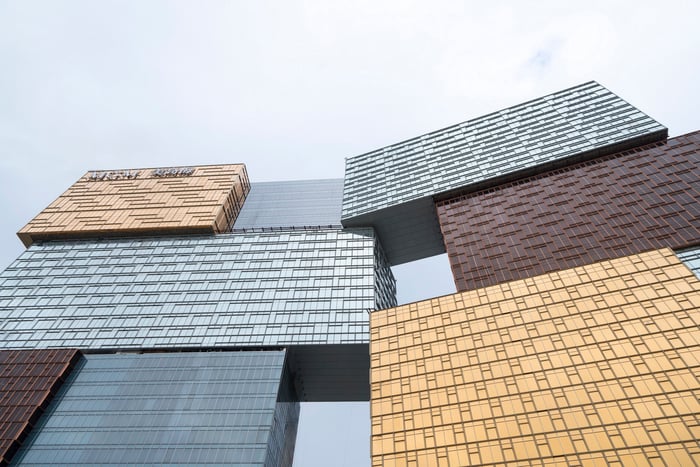 Created out of thin air

There is no guarantee MGM, Las Vegas Sands (LVS 1.19%), or Wynn Resorts (WYNN) will see their concessions renewed. Although it's believed authorities will not want to upset the Macau economy by denying casino operators their licenses after they invested billions of dollars developing their integrated resorts, half of the concessions are held by U.S. gaming operators. Because the relationship between China and the U.S. remains strained over trade and geopolitical issues, using one or more of the U.S. casinos as a pawn in that game is not out of the realm of possibility.

The original bidding process was also seen as flawed. Authorities sought to break up the 40-year stranglehold that billionaire Chinese casino magnate Stanley Ho had on the industry. Initially three concessions were put up for bid, and Wynn and Ho's SJM Holdings (SJMHF 2.42%) won two of them.

The third became embroiled in a dispute between Sands and Galaxy Entertainment (GXYEF 1.90%), so in a King Solomon-like decision, Macau authorities split the concession in two, awarding Galaxy the primary license and giving Sands a subconcession. The subconcession gave Sands the right to operate a casino under the same terms as Galaxy for the same amount of time.

Regulators then went back and divided the other two concessions in half, awarding MGM a subconcession from SJM's license and giving Melco Resorts & Entertainment (MLCO 0.07%) a subconcession out of Wynn's license. These subconcessions also allowed the casinos the same rights as the primary licensee.

However, where Galaxy's and Wynn's concessions were 20 years in length, SJM's concession -- and MGM's subconcession -- were only for 18 years, which necessitated the extension just granted.

Check out the latest earnings call transcript for MGM Resorts.

Although the original licensing process was done publicly, the creation of the subconcessions was not and there are questions about their legality because the law stipulated there were tube only three licenses. As a result, there may be opposition to those operators continuing to hold on to their subconcessions. Moreover, the maximum 20-year life of the concession was seen by some as being too long, so regulators may shorten the holding period. They may also create additional concessions to support local gaming operators that were frozen out last time.

That, however, is the crux of the problem. There are so many unknowns because authorities have not come up with a process to deal with the situation, and one likely won't begin to be formulated until a new administration takes over in Macau, which won't occur till August.

At that time, it's expected a commission will eventually be formed to study the matter, though the findings likely won't be completed until after the concessions expire in 2022, so analysts are anticipating regulators will need to authorize an extension for all concessions for a period of up to five years, the maximum permissible.

One less headache for the moment

In the interim, casino operators like MGM, Sands, and Wynn are dealing with a slowing Macau market. Growth rates that had dropped to single digits last year turned negative in January, the first monthly year-over-year decline since July 2016. Gaming revenues rebounded in February, surprising everyone. But with China's economy also slowing, it's possible casino operators are holding a cold hand for the foreseeable future.

MGM Resorts has at least gained additional time. Having just opened the MGM Cotai last year, it gives the resort operator assurance the rug won't be pulled out from under it before the casino can really get going.