Marketing spend, artificial intelligence, and the approach to driving profits higher were among the spicier topics broached with investors.

Indeed, cultivating higher earnings growth in the face of slowing sales was an implicit theme during the company's earnings conference call. Below, let's review three comments made by McCormick executives during the call that shed light on initiatives to increase bottom-line potential in the coming quarters.

[O]ur strong marketing programs contributed to driving our growth. We've also increased our effectiveness and are getting more value out of each marketing dollar. In the first quarter, we funded increases in our working media with decreases in our nonworking spend. Our newly formed marketing excellence organization, which I discussed at CAGNY [Consumer Analyst Group of New York], is optimizing our brand marketing spend and driving greater speed and effectiveness.

McCormick projects that operating income will increase by 7% to 9% over the $930 million booked in 2018, or 9% to 11% in constant currency terms. The company plans to achieve this growth through marginal revenue improvement and cost savings. It also aims to tightly control selling, general, and administrative expense (SG&A) in the current year. Notably, McCormick has stated its objective to hold its brand-marketing spend at 2018 levels during 2019.

This is consonant with Kurzius' observation above that the company intends to wring a greater ROI (return on investment) out of each dollar of marketing expense. McCormick's management is employing a more disciplined and data-driven approach to brand marketing and promotion as of late.

The organization is also relying on bootstrapping innovation to improve the yield on its marketing investments. Kurzius gave the example of McCormick's Frank's RedHot sauce brand, which playfully engaged some 40 other brands during the Super Bowl on Twitter. The Frank's campaign earned the highest percentage of brand conversations on Twitter during the Super Bowl among companies without an in-game TV ad. According to Kurzius, the campaign drew 250 million consumer impressions on Twitter -- at a much lower cost than a typical $5 million ad spot.

Check out the latest earnings call transcript for McCormick. 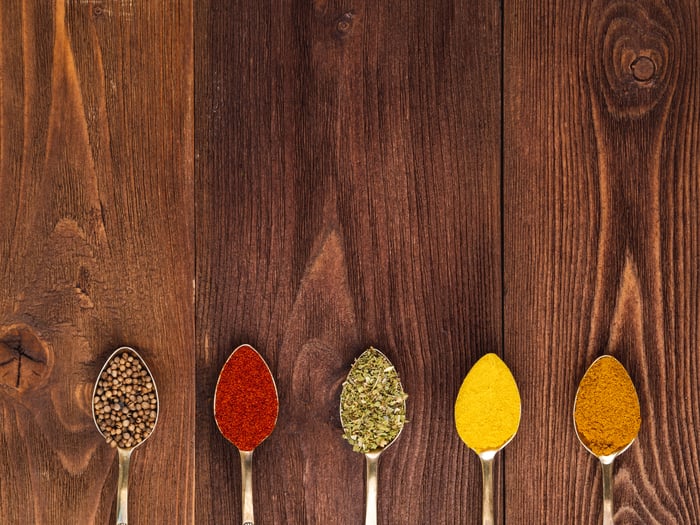 McCormick has partnered with IBM to pioneer the application of artificial intelligence, or AI, for flavor and product development. We're entering in[to] a new era of flavor innovation.

This proprietary cutting-edge technology, which we have previously discussed as computational creativity, sets McCormick apart across our consumer and flavor solutions segments.

As a flavorings company, McCormick owns a treasure trove of data on the science of taste, which it's collected over a period of decades. In its press release announcing its partnership with IBM to utilize artificial intelligence to spur innovation, McCormick noted that the company holds "40+ years of proprietary sensory science and taste data, which includes decades of past product formulas and millions of data points related to consumer taste preferences and palettes."

To leap beyond its current innovation capabilities, McCormick has teamed up with IBM to create an AI-enabled product platform named "ONE." McCormick will utilize IBM's AI capabilities to derive innovative flavorings and insights from its existing data.

The ONE platform will roll out its first commercial offerings later this year. These include initial one-dish recipe mix flavors dubbed Tuscan Chicken, Bourbon Pork Tenderloin, and New Orleans Sausage, which are meant to be paired with the specific proteins in their titles.

The evolution of this partnership may be worth following. AI is increasingly being utilized in the retail industry to develop products which will resonate with consumers based on computational insights. It's unclear if the same approach can be successfully utilized for flavorings, which are perhaps even more subjective than say, clothes or furnishings. Nonetheless, if this incipient effort gains sales traction, it could lead to more efficient R&D (research and development) spending for McCormick, and thus incrementally improve profitability.

A continuous approach to boosting the bottom line

Fast-expanding companies in high-growth industries can often rely on revenue growth to widen profit margins. In the world of consumer packaged goods, however, mature corporations must apply as much innovation to costs as they do to new product development.

In addition to newer measures like its marketing-expense efficiency drive, McCormick has been able to push adjusted earnings higher over the last few years in part through its multiyear cost savings program, CCI, which does indeed appear to be continuous.

Last year, CCI savings equaled $118 million. In the context of McCormick's $5.4 billion in 2018 revenue, this may not seem significant. Yet it was nearly three percent of the company's total expenses for the year, meaning that CCI provides insulation against annual cost inflation in both manufacturing and administrative categories.

This year, McCormick is shooting for at least $110 million in CCI savings, which the company says will, among other positive effects, help drive gross margin higher by 25 to 75 basis points. In essence, while the organization invests in product innovation and brand extensions to rejuvenate its top line, via the cost side, shareholders can expect steady, "continuous" enhancement of net income and earnings per share.

Here's What We Look for in Earnings Reports

How to Analyze Any Stock's Quarterly Earnings

Is Insider Selling a Bad Thing?