For investors interested in both, Broadcom looks to have more potential.

Large, highly profitable technology companies can be quite a draw for some investors. Two such companies are Broadcom (AVGO 0.96%) and IBM (IBM -0.59%).

Broadcom's market capitalization -- that is, the aggregate value of all of its outstanding shares -- is nearly $118 billion, making it one of the most valuable chip companies on the planet. IBM is a bit more valuable, commanding a roughly $125 billion market capitalization. Since both are worth about the same, they're well suited for a head-to-head comparison. 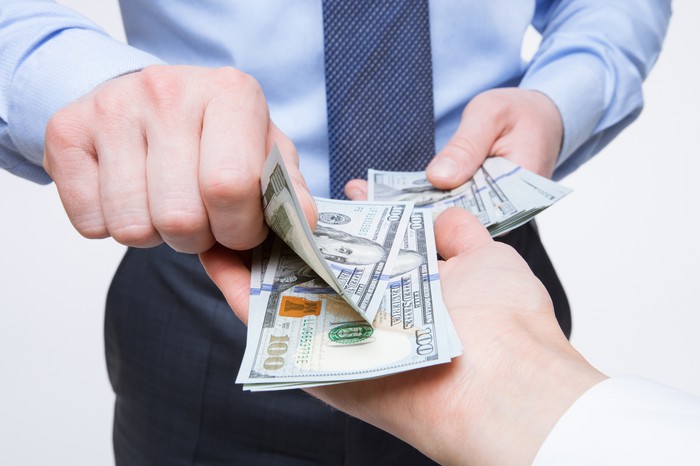 Here are two reasons I'd much rather put my investment dollars into Broadcom's shares than IBM's.

In 2018, IBM broke out of a losing streak of revenue declines, managing 1% revenue growth. The company also turned in free cash flow of $11.9 billion that year -- significant, though down from nearly $13 billion in 2017.

Broadcom, meanwhile, brought in $8.2 billion in free cash flow during its fiscal 2018, and management is guiding for $10 billion in free cash flow for fiscal 2019. In fairness, Broadcom will get a financial tailwind from the integration of CA Technologies, a mainframe software company that Broadcom said last year it planned to purchase. But that's also part of Broadcom's core strategy, which revolves around maintaining its suite of successful businesses and leveraging its massive financial capacity to purchase additional businesses.

The strategy has worked out so well because Broadcom is exceptional at selling off the pieces of its purchased businesses that it doesn't want and integrating the portions it does.

IBM seems to have largely stopped the bleeding as far as revenue declines go, and maybe the company's pricey acquisition of Red Hat could prove a solid win over the long term -- but it's still not a growth company. Broadcom is.

Check out the latest earnings call transcripts for Broadcom and IBM.

What really strikes me is that even though Broadcom has substantially better growth prospects than IBM, Broadcom and IBM aren't too differently valued on a price-to-free cash flow basis.

IBM trades for about 10.42 times what it expects to generate this year in free cash flow. Broadcom, a company with better growth prospects and a superior track record for value creation, trades at about 11.8 times expected fiscal 2019 free cash flow.

IBM is technically a cheaper stock based on that metric, but Broadcom seems to be a superior value, considering its much better growth prospects and its execution in recent years. Consider: IBM stock is down about 26% over the past five years, while Broadcom's is up 343%.

If Broadcom were dramatically more expensive than IBM on a price-to-free cash flow basis, then this might be a tougher call, but as it stands, Broadcom is the clear winner. Both companies generate massive amounts of free cash flow and trade at cheap valuations, but only one of them has me convinced it'll deliver revenue and profit growth -- and, ultimately, significant share-price appreciation -- over the long term. And that's Broadcom.