These dividend stocks offer better yields and growth potential than the beverage giant.

Coca-Cola Company's (KO -0.53%) incredible dividend track record has found a great fan following among income investors. Coca-Cola is about to complete a century -- yes, you read that right -- of consistent dividend payout, having never missed a quarterly dividend since 1920. Even more impressive, the beverage giant is a top Dividend King that has increased its dividend every year for 57 consecutive years now.

Yet, Coca-Cola's dividend yield of 3.4% isn't among the best. There are several stocks that pay better dividends and offer good returns potential for income investors. Our Motley Fool contributors have identified three such dividend stocks for you today: Campbell Soup (CPB 0.91%), Duke Energy (DUK 0.24%), and GlaxoSmithKline (GSK -0.11%).

Neha Chamaria (Duke Energy): Coca-Cola is undeniably a great dividend stock, but the company's dividend increases have been inconsistent. Last month, for instance, Coca-Cola hiked its quarterly dividend by only 2.6% compared with a 5.4% increase in 2018. Instead, what if you could get hold of a dividend stock that not only pays a higher yield than Coca-Cola but is also committed to consistent dividend growth?

Duke Energy offers a good 4% yield today. The utility has paid consistent dividends for 92 years and increased it every year for 13 consecutive years, with the last two increases for 2018 and 2017 coming in at around 4% each. In the long term, Duke believes it should be able to grow annual dividends by 4% to 6%, in line with its earnings per share. The dividend growth should be able to support Duke stock's yield of around 4%. 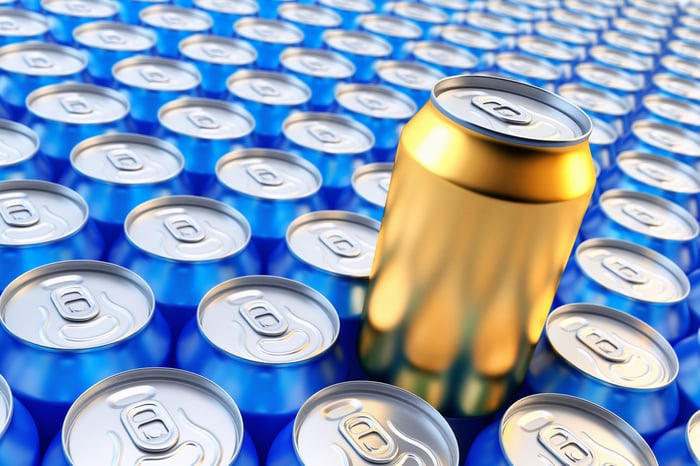 Coca-Cola is a great dividend stock, but not necessarily the best. Image source: Getty Images.

The regulated nature of Duke's business is a major reason why management can confidently lay out financial goals. As a regulated utility, Duke's tariff is set by the government. Any rate hike is also approved by the government provided the utility can generate required returns on equity and invested capital. Duke plans to invest nearly $37 billion in growth capital between 2019 and 2023 to modernize its energy grid, expand natural gas infrastructure, and increase the share of renewable energy in power generation.

In short, Duke Energy has its plans in place to ensure it can secure approval for rate hikes at regular intervals in the near future. As its revenue grows, so should its earnings, cash flows, and dividends.

Mm-mm-meh, but potentially quite good

Rich Duprey (Campbell Soup): I'll start off by admitting that Campbell Soup is a bit of a contrarian stock pick, because there remains a lot of uncertainty surrounding its turnaround plans and whether they can really take hold. Analysts are skeptical, but I think a good case can be made that the soup maker will surprise the pros.

Campbell is under pressure. It carries a lot of debt -- some $8 billion worth at the end of last quarter -- and very little cash on hand (just $203 million). It is selling off at a steep discount businesses that it paid dear for. It sold its Garden Fresh salsa business for $60 million even though it paid $232 million for it four years ago. It is also selling Bolthouse Farms, which it bought in 2012 for $1.6 billion, and taking a loss on that, too. Campbell is also selling its international business.

But this is a necessary housecleaning after former CEO Denise Morrison tried to cobble together a business by buying Campbell's way to growth. While it is performing something of the same thing, with its recent purchase of Snyder's-Lance snack foods, the snack food industry is experiencing strong growth and the soup maker's surprisingly strong fiscal second-quarter earnings report was predicated on those new acquisitions doing well.

Hedge fund operator Daniel Loeb is the power behind the throne now with two seats on the board of directors, and his guidance is what is helping Campbell Soup stabilize its core business while taking advantage of the growth opportunities Snyder's-Lance offers.

The stock has jumped 20% off the lows it hit to start the year, and while some analysts see it as an opportunity to take profits, more patient investors can sit tight and let the recovery take shape. With a dividend of $1.40 per share that yields 3.6%, there's sufficient reward for biding one's time and giving this new direction time to work itself out.

George Budwell (GlaxoSmithKline): With a dividend yield of 5.8%, British pharma giant GlaxoSmithKline offers one of the most generous payouts in the healthcare sector. Glaxo's attractive yield even tops that of Dividend King Coca-Cola at current levels. Yet the drugmaker's dividend isn't exactly a great reason to buy its stock. Here's why.

Glaxo might jump off the page as a great income play based on its enormous yield. But a deeper dive reveals a company in the middle of a major transformation. Within the next three years, Glaxo plans on splitting into two separate entities: an industry-leading consumer healthcare business and a growth-oriented prescription drug/vaccine business.

Keeping with this planned breakup, Glaxo has been pouring resources into its fledgling cancer drug portfolio and pipeline of late -- highlighted by the $5.1 billion acquisition of Tesaro for the ovarian cancer treatment Zejula in 2018. The company also divested its Horlicks consumer healthcare nutrition brands to Unilever PLC at the tail end of last year to accelerate this ongoing pivot to pharmaceuticals and vaccines as its main growth driver going forward.

While these bold moves could spur a new era of growth for the company, the future of Glaxo's top-shelf dividend program is now in serious doubt. Glaxo's pharmaceutical and vaccine business might be able to generate more top-line growth as a stand-alone unit, but there's no doubt that a breakup will negatively impact the company's free cash flows. Income investors, therefore, may want to tread lightly with this high-yield healthcare stock for the time being.