Please ensure Javascript is enabled for purposes of website accessibility
Log In Help Join The Motley Fool
Free Article Join Over 1 Million Premium Members And Get More In-Depth Stock Guidance and Research
By Keith Speights - Updated Apr 17, 2019 at 11:41AM

The tobacco giant's decision to invest in marijuana grower Cronos Group appears to be paying off nicely despite early criticism.

It's been nearly four months since Altria (MO 0.93%) announced that it was making a huge bet on marijuana. In December, the tobacco giant agreed to invest around $1.8 billion for a 45% stake in Canadian marijuana producer Cronos Group (CRON 3.21%). The deal made a big splash in the cannabis industry, with Cronos upstaging several of its larger rivals.

There was plenty of skepticism about Altria's decision, however. Some observers thought that the tobacco maker grossly overpaid. But even though Cronos Group stock has been in something of a lull in recent weeks, Altria's investment in the marijuana stock looks like a really smart move so far. 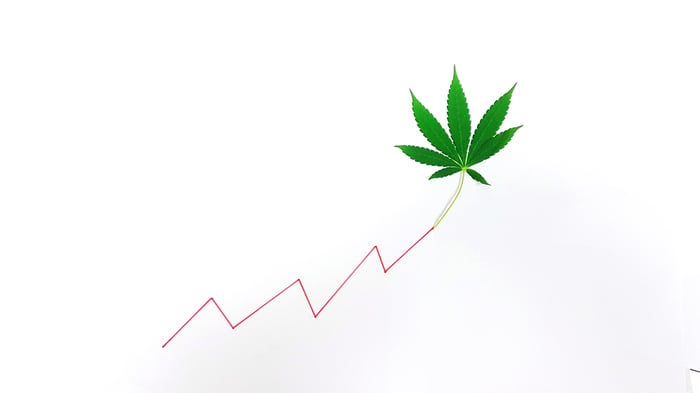 Altria agreed to buy 146.2 million shares of Cronos, roughly 45% of the company, for 16.25 Canadian dollars per share (US$12.13). The price represented a 41.5% premium over the 10-day volume weighted average price of Cronos stock as of Nov. 30, 2018, the last trading day prior to Cronos Group's public disclosure that it was in discussions with Altria.

By the time the deal was announced on Dec. 7, 2018, Cronos Group's share price had soared 39% higher. But that was just the start. In the following months, Cronos stock continued to rise. Altria now has a smoking-hot return of close to 70%.

In retrospect, Altria's decision to invest in Cronos seems shrewd. The tobacco maker certainly had to think that its partnership with a relatively small Canadian marijuana producer would provide a significant catalyst to the stock. It likely also suspected that other investors would understand the competitive advantage that a huge cash stockpile from the deal would give Cronos.

Of course, there was more than just the circular logic involved with Altria investing in Cronos because it thought the investment would boost the marijuana grower's share price. Altria was looking to the cannabis industry as a new growth opportunity. Several of Cronos Group's peers had much higher valuations. Perhaps most importantly, though, Altria decided to make a calculated bet on Cronos' management team, led by CEO Mike Gorenstein.

Check out the latest earnings call transcripts for Altria and Cronos Group.

Another likely reason why Altria's deal with Cronos helped drive the marijuana stock's price higher was that the tobacco giant is taking a very active role in the company. There are now seven members of Cronos Group's board of directors, up from five previously. Altria nominated four of the board members.

In addition to effectively gaining control of Cronos Group's board of directors, Altria will soon have a member of its management team in the CFO spot at Cronos. Jerry Barbato currently serves as Altria's senior director of corporate strategy but will transition to the head of Cronos Group's financial operations on April 15, 2019.

It makes sense that Altria would want to pull most of the strings after buying 45% of Cronos. And that stake could rise in the future: Altria owns a warrant that it can exercise anytime over the next four years to acquire more interest in Cronos Group. If the warrant was exercised now, it would give Altria a 55% stake in Cronos for another $1 billion or so.

Will the ROI get even better?

Most of the analysts' concerns center on valuation. They don't think Cronos Group is currently worth its $3.6 billion market cap.

Cronos didn't give investors a lot of reasons to be overly enthusiastic in its recent fourth-quarter update. Although sales soared, the company missed the consensus analysts' revenue estimate for Q4. Cronos also posted a big net loss due to its significant spending increases. In addition, Cronos Group's management team didn't provide any details on what the company's plans are for the U.S. hemp market or the cannabis edibles market anticipated to open in Canada later this year.

All of this could lead one to conclude that Altria's return on investment from Cronos could decline instead of rising in 2019. That could happen. But skepticism about Altria's marijuana move hasn't panned out so far.