The appointment of Ned Sharpless suggests there will be no letup in the push for more limits and regulation.

Hopes that the successor to Food & Drug Administration (FDA) commissioner Scott Gottlieb would be more amenable to working with the electronic cigarette industry were undoubtedly dashed when National Cancer Institute director Ned Sharpless was appointed as the interim head of the regulatory agency.

While an acting commissioner is not the permanent replacement (though he could be), the appointment seems to send the message that there won't be a change in policy when the new commissioner is named. Indeed, Health & Human Services Secretary Alex Azar said as much in announcing Sharpless' appointment, noting "There will be no letup in the agency's focus, from ongoing efforts on drug approvals and combating the opioid crisis to modernizing food safety and addressing the rapid rise in youth use of e-cigarettes." 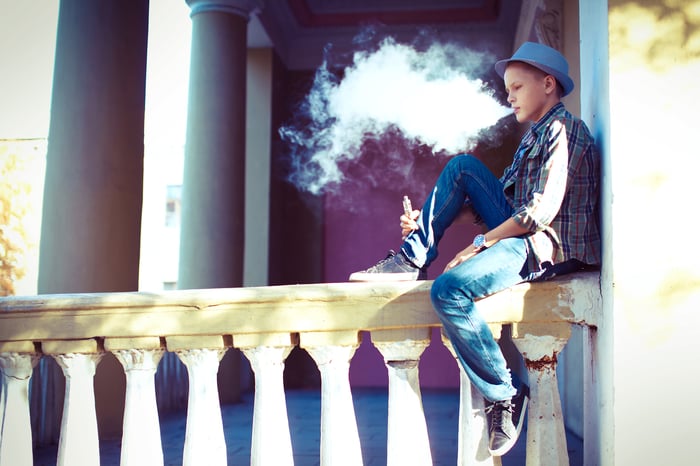 The e-cig industry's relationship with the FDA and Gottlieb became more strained after the commissioner proclaimed there was an "epidemic" of teen usage of the electronic cigarettes. Gottlieb was initially seen as friendly toward the industry, partly because of his prior financial interests in a vape shop that reportedly views vaping as a recreational activity. When Gottlieb came on board, he eased the short regulatory deadlines his predecessor had imposed that could have seen e-cigs removed from the market, indicating a willingness to work with the industry.

But the situation soured as the issue of teen use of e-cigs put him, the agency, and the industry at loggerheads. In particular, industry leader Juul Labs bore the brunt of the change, because its pod-based Juul device has become the e-cig of choice for teens.

Gottlieb was especially piqued by Altria (MO -0.34%) making a $13 billion investment in Juul, which Gottlieb deemed to demonstrate that both companies were reneging on their promises to help reduce teen access to e-cig devices.

A meeting a week ago between the commissioner, Altria, and Juul was described by Gottlieb as "difficult" because he believed the investment was business-driven rather than based on harm reduction. He reiterated that he was more than willing to flex the agency's muscle and pull pod-based electronic cigarettes like Juul's off store shelves if youth usage rates don't decline.

Thus his retirement announcement was seen as an opportunity for the Trump administration to appoint someone more in line with its general philosophy of less regulation being better for business. The appointment of Sharpless to head the agency on an interim basis suggests that may not be the case.

Although there's no question about his qualifications to lead the regulatory body, an individual coming from the National Cancer Institute is not viewed as one to let up on the push for more regulation of electronic cigarettes, and the FDA is proposing some harsh new rules and limitations. While they're ostensibly aimed at limiting teen access to e-cigs, they have the potential to impact adults as well, which could undermine the goal of getting people to quit smoking.

Gottlieb has also ordered Juul, Altria, British American Tobacco, Imperial Brands, and Japan Tobacco to come up with plans on how they plan to stop teens from using e-cigs. The five companies account for 97% of the U.S. e-cig market.

With Sharpless now in the driver's seat, and likely anyone who may follow, there doesn't appear to be any opportunity for relaxing the FDA's pedal-to-the-floor position on teen e-cig usage. It also calls into question whether Philip Morris will be able to introduce its IQOS heated-tobacco device, with or without a reduced-risk label. The cigarette giant has been expecting to hear a decision since last year, though none has been forthcoming.

While the e-cig industry may have hoped for a transition in leadership that would look favorably on it, it seems as though it will instead get more of the same.