More consumers are taking a DIY approach to personal protection.

Amazon.com (AMZN 0.19%) and Alphabet (GOOG -1.47%)(GOOGL -1.35%) stand to reap a windfall from the rapidly evolving residential security market as the industry evolves from one centered on professional monitoring services to more of a do-it-yourself (DIY) model.

Research from Parks Associates shows consumers who plan a home security purchase within the next year are twice as likely to buy a smart-home product, such as video doorbells, cameras, or door locks, than they are to buy a professional monitoring service, like those offered by ADT, Brinks, and Vivint.

The trend also has the potential to help lift Arlo Technologies (ARLO -1.31%), which has had a rough go since it was spun off from Netgear last year -- it's lost three quarters of its value since its August IPO. But Arlo, a security-camera maker, has placed its chips on high-priced, high-end systems at a time when the public is looking for low-cost solutions. 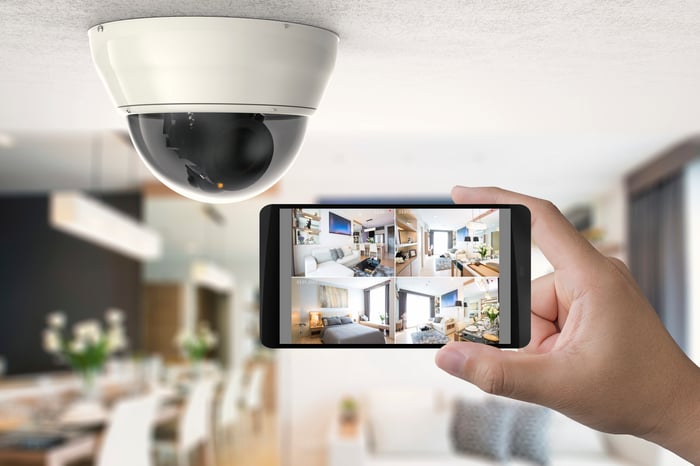 The declining cost of personal protection

Home security has long been dominated by the home monitoring titans, but the advent of the connected home is allowing homeowners to take a more proactive stance at lower cost, unencumbered by lengthy and costly contracts.

Seeking safety for their family and possessions, consumers are particularly seeking products that send visual alerts to their smartphones when someone approaches the house. According to the Parks survey, 67% of those buying a security system want video alerts when someone is approaching the home.

Amazon's Ring was among the very first to introduce a video doorbell. The product quickly became popular due to its low cost and the ability to see who was at the door without answering it, which led others, including August Home and Alphabet's Nest, to subsequently introduce their own versions. It's notable that Arlo also introduced a connected doorbell last summer, but did not include video with it in an apparent effort to sell more of its home security cameras separately.

Numerous manufacturers are now offering high-quality cameras that allow consumers to decide how much coverage they're willing to pay for. Although manufacturers do offer product bundles, there seems to be little consumer interest in them because cost is a high hurdle. Parks Associates found 61% of consumers would like the option of financing the hardware necessary to create a complete security system rather than paying cash up front.

Ring, for example, offers several packages that start at $350 for a doorbell camera and single light, and that run as high as $850 for a doorbell and three cameras. Nest packages cost as much as $1,400 for an alarm system with sensors, one indoor and one outdoor camera, a door lock, and a doorbell, while Arlo offers four of its newest 4K cameras for $1,000.

Check out the latest earnings call transcripts for Amazon and Alphabet.

There are other reasons beyond the prohibitive cost of professional monitoring services that explain why the DIY model is taking hold. For one, the alert system is instantaneous.

With a monitoring service, when an alarm is activated, there is often a delay before the service is notified to give the homeowner a chance to deactivate the system. If that doesn't occur, then the monitoring service will try to contact someone in the home, and, if that fails, an attempt is made to contact the homeowner via mobile phone. Only if this last step also fails are the police or fire department notified to respond.

Several minutes may elapse before authorities are notified, and depending on the jurisdiction, it may be several minutes more before they arrive. Criminals have ample time to get in, steal what they want, and get out.

Conversely, the consumer-built systems give homeowners immediate visual confirmation that there is a problem, and the police can be notified right away, if necessary. And if you're at home, you can see who is approaching your front door.

The future is not professional monitoring

Parks Associates notes "only 28% of security intenders plan to subscribe to long-term professional monitoring, illustrating competition from alternative business models and stand-alone security products that have entered the market."

With a broad range of options available, Amazon and Google are arguably best able to meet the needs of those looking for an advanced but economical home security system. Conversely, ADT, Vivint, and other professional monitoring services are most at risk from the migration to do-it-yourself security platforms.