This 7.7%-yielder has a top-notch financial profile and solid growth prospects.

MPLX (MPLX 1.10%) has treated income investors well throughout its history. The midstream master limited partnership (MLP) has consistently paid its investors more money each quarter since inception. That steady growth has boosted its yield up to an attractive 7.7% at the moment.

The company has worked hard to make that payout increasingly sustainable by firming up its financial foundation. That combination of yield, top-tier financial profile, and expectation for continued growth make it an excellent income stock to buy this month. 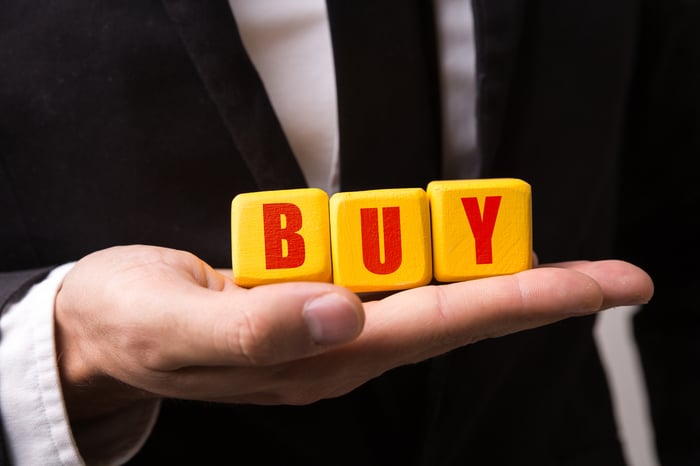 MPLX's steady midstream operations generated $2.8 billion in cash in 2018. The company distributed $2.1 billion of that money to investors, giving it a healthy 1.33 coverage ratio. That left it with roughly $700 million in excess cash to invest in growth projects. The company was able to supplement that with additional debt to fund a total of $2.2 billion of expansions while still maintaining a strong balance sheet since it ended the year with a comfortable 3.9 leverage ratio.

MPLX financed all its growth spending without diluting existing investors by selling additional equity. That puts it on par with the top midstream companies in the sector, which are increasingly working toward retaining enough cash after paying their distributions to self-fund growth. This funding strategy shift should help MPLX and its peers grow cash flow at a faster pace on a per-share basis, or per unit in the case of MLPs like MPLX.

The income stream is only part of the story

Last year's expansion-related investments should help boost MPLX's cash flow to about $3.1 billion in 2019, up roughly 11% year over year. That will easily support the company's plan to increase its distribution by $0.01 per unit each quarter this year, or about 6% above last year's rate. With cash flow on track to grow at a faster pace than the distribution, MPLX's coverage ratio will expand, allowing the company to retain more money to fund expansions. MPLX currently expects to spend another $2.2 billion on growth projects this year and estimates investing an additional $2 billion in 2020. These projects include expanding some of its pipelines, doubling the capacity of a recently acquired terminal, and building several more gathering and processing plants. As these projects come online, they should boost cash flow up to an estimated $3.5 billion by next year, which should support continued distribution growth.

MPLX has several other expansion projects in development that could extend its growth forecast well beyond 2020. As part of the company's evolution in recent years, it's working with other midstream companies to build long-haul oil and gas pipelines. Last August, for example, it signed a letter of intent to jointly develop the Whistler Pipeline Project with Targa Resources, NextEra Energy (NEE 2.71%), and private-equity backed WhiteWater Midstream. The 450-mile pipeline would move natural gas from one market hub in the Permian Basin to NextEra Energy's hub closer to the coast of Texas. While the partners initially thought this project could begin operations by the end of next year, they've yet to secure enough customers to move forward. Though, given the production growth anticipated from the region, it's likely only a matter of time before producers will need additional pipeline capacity. The company also has a natural gas liquids pipeline under development as well as some related infrastructure.

Meanwhile, MPLX could make additional acquisitions both from its parent, refining giant Marathon Petroleum (MPC 1.73%), as well as from third parties. Marathon Petroleum currently has a couple of midstream projects under construction that it acquired when it bought fellow refiner Andeavor. On top of that, it holds a controlling interest in Andeavor's former MLP that it could eventually merge into MPLX. In addition, MPLX has an excellent track record of buying midstream assets from third parties that it integrates into its footprint. Last year, for example, the company paid $450 million to buy a Gulf Coast export terminal. MPLX is building a second export dock as well as incremental storage capacity at the facility to support its export strategy.

As MPLX secures additional expansions and completes more acquisitions, it will enhance the company's longer-term growth prospects, increasing its ability to boost the distribution in the future.

Check out the latest earnings call transcript for MPLX.

A great income-stock for the next several years

While MPLX's 7.7% yield is the main draw, investors shouldn't overlook its growth potential. The company expects to invest more than $4 billion over the next two years, which should boost cash flow by 25% during that timeframe. That fast-growing cash flow stream will enable the company to continue increasing its payout while maintaining a top-notch financial profile, making it a great stock for income-seeking to buy in April.