Please ensure Javascript is enabled for purposes of website accessibility
Log In Help Join The Motley Fool
Free Article Join Over 1 Million Premium Members And Get More In-Depth Stock Guidance and Research
By Adam Levy - Updated Apr 3, 2019 at 8:30AM

And it might be too expensive for it to even try competing.

Amazon.com (AMZN 2.57%) is the dominant force in online shopping in the U.S., accounting for about half of Americans' online spending.

But there's a growing area where Amazon lags well behind competitors like Walmart (WMT -0.61%) and Target (TGT 4.32%). Curbside fulfillment for online orders is increasingly popular, and Amazon is hard-pressed to compete. Its main consumer-facing physical presence are its Whole Foods Market locations, which account for nearly all of Amazon's 520 physical stores in North America. By comparison, Walmart has over 2,000 stores offering curbside pickup and will spin up 1,000 more by the end of the fiscal year.

A report by Cowen & Company estimates curbside fulfillment could generate between $30 billion and $35 billion next year. And while Amazon is working to compete, it's playing from behind -- and catching up will be extremely expensive. 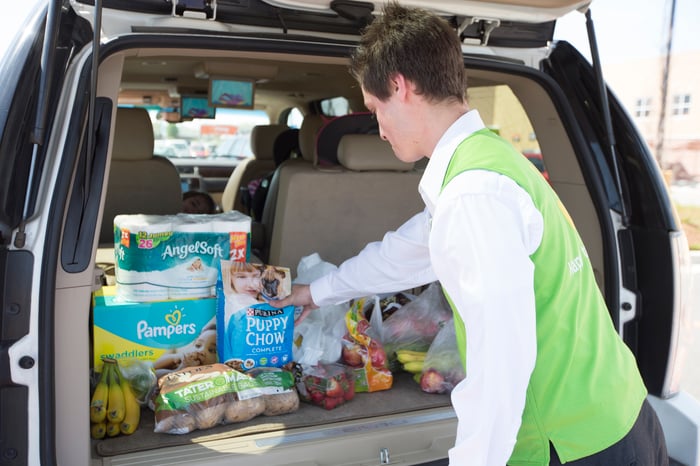 The growth of curbside pickup at stores like Walmart and Target is a result of the fact that it combines the convenience of online shopping and the speed of physical retail. Customers don't even have to get out of their cars and go into the stores.

While curbside pickup is still used by only a small percentage of shoppers, that number is growing. Cowen estimates 11% to 13% of Walmart shoppers use grocery pickup, and 14% of all shoppers used grocery pickup in 2018. The analysts expect the number of shoppers who have tried grocery pickup to climb to 25% by next year as the feature expands to more stores and retailers add more products available for curbside fulfillment.

Walmart is adding 1,000 new stores to its 2,100 grocery pickup locations this year. Target's Drive Up service will be available at all of its 1,845 stores by the end of the year.

Meanwhile, Amazon is lagging behind. It offers Prime Now on a few items in a few cities. Prime Members can order groceries from Whole Foods for pickup, but that's available in only 22 cities. Amazon simply doesn't have the physical presence to compete with Walmart or Target.

Should Amazon invest in grocery pickup?

Amazon's ability to compete in curbside fulfillment requires additional "curbs." The company is expanding Whole Foods locations, and it's testing a new grocery brand. It can design the new stores with curbside fulfillment in mind, which could give it a significant advantage in the future. Walmart and Target are forced to build systems around their existing store and parking lot layouts.

But building and operating thousands of grocery stores is expensive, and the profits aren't particularly attractive. Supermarket profit margins float between 1% and 2%. Whole Foods, which specializes in organic food, had a profit margin of just 2.4% in the 40 weeks prior to its acquisition by Amazon. Not to mention that the cash outlay for buying, leasing, and developing real estate would be massive to reach a scale similar to Walmart or Target in short order.

Amazon has never let costs stop it from seizing an opportunity if it's attractive enough. And the $35 billion opportunity in curbside pickup is more than 10% of Amazon's total retail sales last year.

But the opportunity goes beyond curbside fulfillment. Walmart and Target are attracting new customers to their digital properties. Cowen estimates 40% to 60% of Walmart's curbside orders come from new customers. That could lead customers to use the brick-and-mortar retailers for more online orders instead of Amazon, making curbside pickup a bigger threat to Amazon than just missing out on that $35 billion opportunity.

Amazon needs to start experimenting with establishing and promoting curbside fulfillment in more markets to determine whether it's feasible. If it doesn't work out, Amazon will lose some money. But if it can establish a significant physical presence, the long-term potential could be very meaningful for the company.