These two biotechs have been stellar growth vehicles for investors, but only one stock is worth buying right now.

Biotech stocks, by and large, have been tremendous growth vehicles for investors over the last decade. This industrywide growth spurt has been fueled by a suite of tailwinds, such as an increasingly permissive Food and Drug Administration (FDA), an innovation bonanza, as well as an aging global population.

Intercept Pharmaceuticals (ICPT -0.27%) and Gilead Sciences (GILD 0.98%) have been two of the biggest beneficiaries of this long-lived bull market. For example, Intercept's shares have risen by nearly 500% since the company's IPO in 2012. And Gilead, despite its much larger market capitalization, also managed to generate a noteworthy 116% total return on capital over this same time period (including dividends). 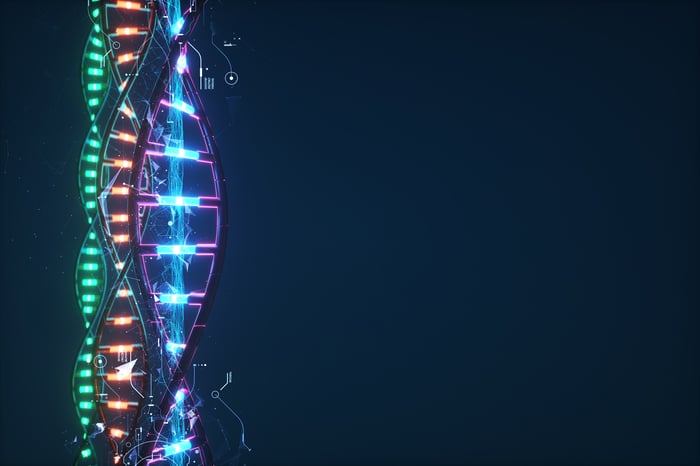 Can Intercept continue to generate jaw-dropping returns on capital or should investors start to pivot toward a top dog like Gilead heading into the next decade? Let's consider the case for each stock to find out.

Intercept's value proposition centers around its nonviral liver disease drug Ocaliva. Ocaliva was first approved by the FDA as a treatment for primary biliary cholangitis (PBC) in May 2016. Since then, Intercept has been able to rack up additional regulatory approvals for the drug in the EU, Canada, Israel, and Australia for this same indication.

This year, Wall Street expects Ocaliva's PBC sales to grow by 32% year over year to reach a healthy $237 million. Intercept's shares are thus trading right around 14 times its 2019 projected sales. While that sky-high valuation might seem outlandish to classic value investors, Intercept does have a potential ace up its sleeve that could make its valuation much more palatable on a forward-looking basis.

Specifically, Intercept is racing to expand Ocaliva's label to include nonalcoholic steatohepatitis (NASH) -- an indication that reportedly afflicts 5% of all adults in the U.S. and for which there is no FDA-approved treatment at the moment. In short, Ocaliva's sales could grow at an exponential rate if it can grab a fairly clean label for NASH.

Another complicating factor is that 51% of patients in the study's high-dose arm reported experiencing pruritis (itching). Itching -- even severe cases -- may not be enough to derail the drug's regulatory approval, but it could lead to low compliance levels in the real world, and open the door for rival drugs with less annoying side effect profiles.

Summing up, Intercept appears set to become the first company with an FDA-approved NASH drug. And by being the first to market, Ocaliva's sales should easily top $1 billion early in the next decade. However, this trailblazing NASH candidate may also struggle to ward off more efficacious and safer competitors -- meaning that these blockbuster-level sales might be short-lived.

Unlike Intercept, Gilead sports an extremely diverse product portfolio and clinical pipeline. The company's core area of expertise has historically revolved around HIV medicines. In more recent times, though, the biotech has been expanding into several other high-value areas, such as viral and nonviral liver diseases, oncology, and immunology. That said, Gilead is currently in the midst of a major metamorphosis and the final product is far from certain at this stage.

Where do things stand right now? Gilead's two largest franchises -- HIV and hepatitis C -- are moving in opposite directions. The biotech's new HIV medicine Biktarvy is off to a record start in terms of sales, and its other TAF-based HIV medicines -- Genvoya, Descovy, and Odefsey -- are all also performing well in the marketplace.

In contrast, Gilead's hepatitis C franchise, consisting of Epclusa, Harvoni, Vosevi, and Sovaldi, has been in free fall for over three years now, thanks to a shrinking market place, price erosion, and the entrance of new competitors. The good news is that 2019 should be the bottom for this struggling unit.

Meanwhile, Gilead's move into immuno-oncology, through the acquisition of Kite Pharma, has gotten off to a bumpy start. Long story short, this acquisition has yet to boost Gilead's top line in a meaningful fashion, and it may take several more years before this costly business development move pays off. Pouring salt into the wound, Gilead also recently announced the late-stage failure of its lead NASH candidate selonsertib, perhaps wiping billions in future sales off the table.

It hasn't been all doom and gloom for this blue chip biotech, however. Gilead's anti-inflammatory medicine filgotinib posted strong late-stage results in a pair of studies for rheumatoid arthritis last week. This single drug has the potential to generate somewhere between $1.1 billion to $6.6 billion in annual sales within the next five years. Filgotinib, in turn, could usher in a new era of growth for the company.

While riskier, Intercept is arguably the better growth stock to buy right now. Ocaliva is staring down a multibillion-dollar opportunity in NASH, which could cause the biotech's top line to soar over the next few years. Of course, regulators might shoot down Ocaliva's proposed label expansion over safety issues. But that's an unlikely turn of events with this particular FDA.

Gilead, on the other hand, still has a lot of work to do to clarify its long-term prospects to investors. Filgotinib is a good start. But the biotech needs to round out its cancer franchise with another acquisition.