Please ensure Javascript is enabled for purposes of website accessibility
Log In Help Join The Motley Fool
Free Article Join Over 1 Million Premium Members And Get More In-Depth Stock Guidance and Research
By Dan Caplinger - Apr 2, 2019 at 9:31AM

Soaring markets in the first quarter weren't kind to these funds.

Investors have enjoyed a great start to 2019, as the first quarter has delivered some of the most impressive returns in years. Coming on the tails of a tough December, the gains have been especially welcome, and even though some investors worry that the good times might be coming to an end, it's still been reassuring to see some of the most promising areas of the market do so well to begin the year.

However, even though most of the thousands of exchange-traded funds that investors have access to have been able to share in the overall market's success, some have found themselves in the wrong place at the wrong time. In particular, the following three ETFs are among the worst performers during the first quarter, and below, we'll look more closely at why they've been on the decline and whether their losses are likely to continue.

Volatility falls off a cliff

For investors hoping to profit from a stock market crash, volatility ETFs sought to offer more direct exposure to potential panics. With a price tied to the value of the S&P Volatility Index, also known as the Fear Index, iPath Series B S&P 500 VIX Short-Term Futures is just one of many investments whose value tends to go up as major stock indexes go down.

Coming into 2019, investors were more nervous than ever about the prospects for an end to the 10-year-old bear market, especially in light of the nearly 20% correction that the stock market had suffered during the fall of 2018. Yet as market benchmarks rebounded, volatility fell back to the complacent levels at which it had traded throughout much of the past several years. That sent shares of the newly issued iPath Series B falling, and shareholders have to hope the market will reverse course if they expect the losses to stop. 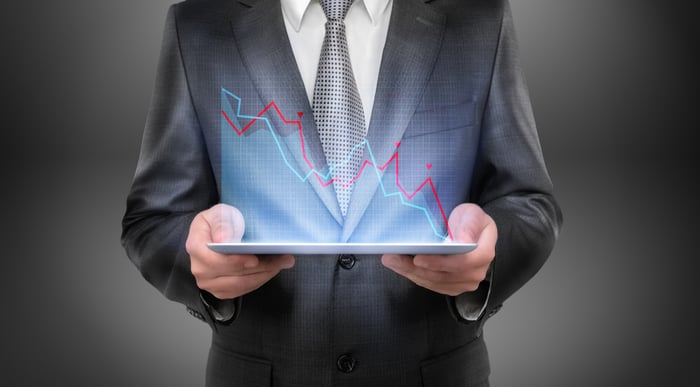 There are a host of ETFs designed to deliver the inverse of the movements of a particular stock index, but there aren't that many outright short-selling funds. AdvisorShares Ranger Equity Bear is an exception, with an investment objective that specifically targets certain stocks that the fund's managers believe have low earnings quality or aggressive accounting practices.

The idea behind the AdvisorShares ETF isn't unreasonable, but its execution has been poor. Among its top 10 stocks, short positions in Dover and Wayfair have been especially unfortunate, with Dover shares climbing more than 30% on strong performance, and the success of e-commerce furniture has lifted Wayfair almost 65%. There's no guarantee those and other stocks will continue to do well, punishing short sellers -- but the current trend has been painful for AdvisorShares shareholders to endure.

Finally, the U.S. Natural Gas Fund has seen a modest loss so far in 2019. That stands in stark contrast to its counterpart in the crude oil arena, which just fell short of being one of the top performers in the quarter.

As winter comes to an end, natural gas prices have been on the decline, especially given the glut of supply among major producers across the globe. Because its share price is tied to natural gas futures, U.S. Natural Gas also suffers from weak prices. Long-term, industry watchers still expect global demand to rise over time, but with many producers using liquefied natural gas exports to even out price disparities in the global market, it could be a choppy road for this ETF as the market adjusts to changing conditions.

Watch out for these ETFs

It's never good to have to struggle through bad performance, and investors in these ETFs have to be disappointed with their returns so far in 2019. Yet at this point, there's no obvious event in sight that suggests a quick reversal of fortune for these three funds is imminent -- and further losses are possible if conditions remain as they are right now.

These 4 ETFs Got Smacked Down in November
Broken Investment Strategy? Here's How to Fix It
5 Keys to Smart ETF Investing
Contango: 1 Key Reason Not to Buy These ETFs
This Innovation Could Simplify MLP Investing