In a conference call with analysts, CEO Bill Nash and his team added details on those market conditions as the company looked ahead to a new fiscal year. Below are a few highlights from that presentation. 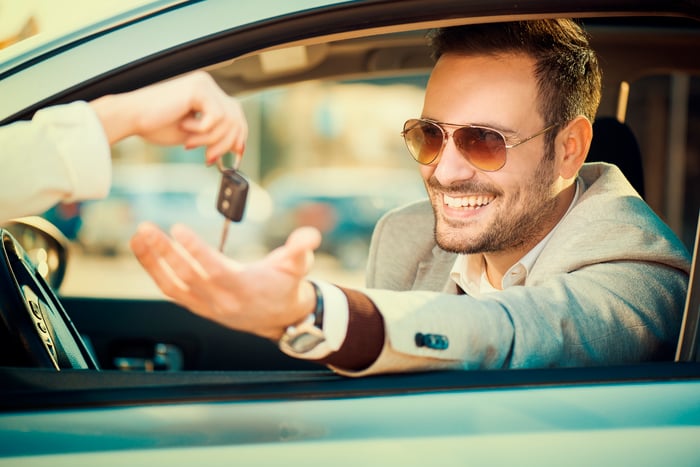 Our share of 0 to 10-year-old vehicles ... fell from approximately 4.5% in 2017 to 4.4% in 2018. While this is disappointing, the decrease in share occurred earlier in the year and started to reverse in the second half of the year when we saw share gains."
-- Nash

CarMax's sales pace was muted this quarter, as it has been for most of the year. Customer traffic declined, and its 2.8% increase in comparable-store sales, while marking an improvement over the past quarter's 1% drop, wasn't enough to protect market share for the year.

Yet that market share slide appears to have ended, executives said, as CarMax started clawing back lost ground over the last few months. Revenue growth would have been stronger this quarter, too, except for delayed tax refunds compared with the prior year.

Holding the line on costs

We are pleased to show [expense] leverage as it demonstrates that we're able to offset some of the growth in spend with efficiencies and staffing optimization.
-- CFO Tom Reedy

CarMax managed a double-digit boost in adjusted pre-tax earnings despite having spent aggressively on improving its IT infrastructure and adding new stores to its retailing footprint. Part of that success can be attributed to healthy gross profit per vehicle, which ticked up to $2,166 from $2,147 a year earlier. Yet the broader contributing factor was expense discipline, as the company found ways to do more with less -- whether that was in respect to customer traffic or its level of employees. "This is a testament to the strength of our diversified business model and ongoing focus on operational efficiencies," Nash said.

After seeing the results so far in Atlanta, we're even more confident that this is the right direction. We believe that the omnichannel experience will be one of the key levers that help drive comp sales and market share growth.
-- Nash

CarMax has been talking up the potentially transformative impact of digital sales for over a year, but this quarter was the first one to include some hard numbers for investors to review. The chain's fully online selling process -- available just in Atlanta right now -- drove double-digit sales growth, management said, and customers chose to finance through CarMax at about the same rate they did with in-store purchases.

Online shoppers were a bit less motivated to sign up for its service plans, but management believes it could improve that conversion over time. In fact, the online sales channel might even be "more efficient than our current model," according to Nash.

Management was cautious to remind investors that the early data on digital sales is limited to just a few months in only one test market. Yet CarMax is excited enough about the possibilities here that it plans to have the selling process available completely online across the country by early 2020. Until then, investors will see increased costs associated with preparing for this rollout, with most of the benefits not set to start lifting earnings results for at least another year.