Shares of Achillion Pharmaceuticals (ACHN) were jumping 8.8% higher as of 11:49 a.m. EDT on Wednesday after rising as much as 10.8% earlier in the day. The biopharmaceutical company announced before the market opened that it had achieved the threshold enrollment for two phase 2 clinical studies evaluating experimental drug ACH-4471 in treating patients with rare kidney disease C3 glomerulopathy (C3G).

Reaching the threshold enrollment of 23 patients in the two phase 2 clinical studies of ACH-4771 is an important milestone for Achillion. With the needed number of patients now enrolled in the studies, the company is now in a great position to complete the six-month blinded, placebo-controlled trial in the fourth quarter. Achillion's other phase 2 study is a 12-month open-label trial where both patients and investigators are aware of which drug is being administered. 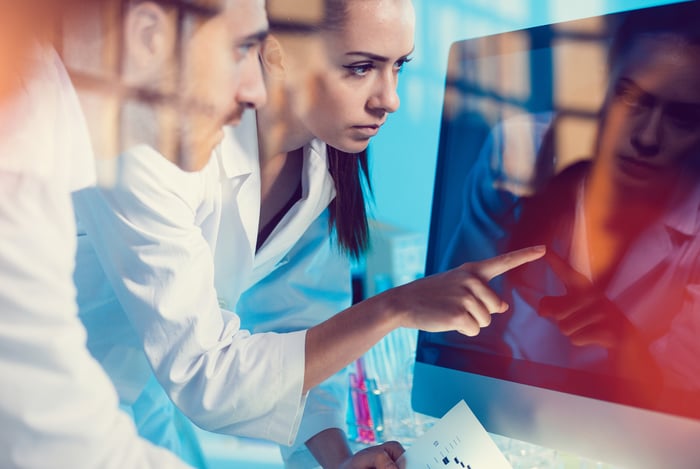 C3G currently has no approved therapy. Patients with the disease experience chronic deposits of C3 protein fragments in their kidneys. This results in inflammation and can lead to permanent kidney damage. Between 30% and 50% of patients with C3G require dialysis and/or a kidney transplant within 10 years of being diagnosed with the rare disease.

ACH-4771 is Achillion's lead pipeline candidate. The company is also evaluating the experimental drug in combination with Alexion Pharmaceuticals' Soliris in treating rare blood disease paroxysmal nocturnal hemoglobinuria (PNH) in a phase 2 study. In December, Achillion stock plunged after the company announced that it wouldn't move forward with a late-stage study of ACH-4771 as a monotherapy in treating PNH.

Achillion CEO Joe Truitt said that the company expects to present data from the two phase 2 studies of ACH-4771 in treating C3G along with real-world data to the U.S. Food and Drug Administration (FDA) in the fourth quarter of this year. If the results are positive, Achillion should be able to advance the drug to a pivotal phase 3 study in 2020.