Find out what made one of these stocks live up to its ticker symbol.

The stock market had an up-and-down session on Wednesday, initially rising in light of a positive outlook on trade talks between the U.S. and China but then giving up some of that ground late in the day. Major benchmarks finished modestly higher, as investors seemed torn about whether global macroeconomic conditions are poised for further slowdowns. Despite the choppy markets, some stocks posted solid gains. Advanced Micro Devices (AMD 0.47%), Acuity Brands (AYI -1.77%), and DMC Global (BOOM 0.66%) were among the top performers. Here's why they did so well.

Shares of Advanced Micro Devices climbed 8.5% after the chip company got favorable comments from stock analysts and saw signs of strong order activity. Analysts at Nomura gave AMD a buy rating, saying that it might well be able to take away market share from top competitors Intel and NVIDIA. In addition, Taiwan Semiconductor Manufacturing, which is a key customer of AMD, reported strong order volume for smartphones, suggesting that demand for AMD chips could well increase throughout the rest of 2019. With Nomura putting a price target of $33 on the stock, AMD could have further to run. 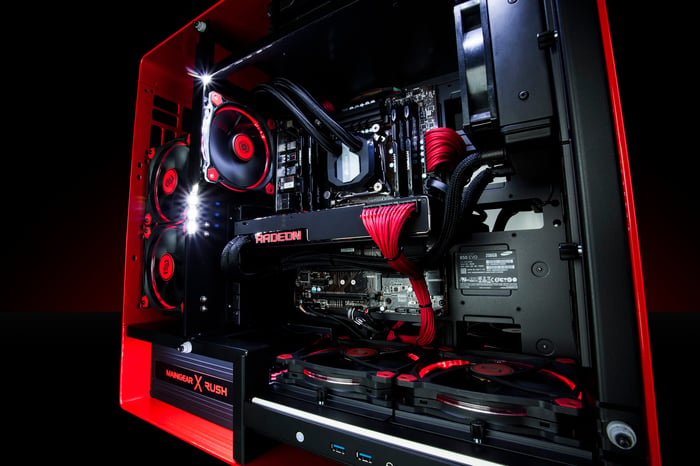 Acuity Brands saw its stock gain 9% following the release of its fiscal second-quarter financial results. The lighting and building management solutions specialist said that revenue inched higher by 3%, helping to boost Acuity's adjusted earnings per share by 5% compared to year-earlier levels. CEO Vernon Nagel blamed tariffs and inflationary cost pressures for some of his company's sluggishness, as well as the fact that price increases implemented recently pulled some sales forward into earlier quarters. Acuity was cautiously optimistic in its forecast for the rest of the fiscal year, and after a tough 2018, investors seem pleased that the lighting specialist is showing signs of sustained success.

Finally, shares of DMC Global jumped 16%. The maker of explosive components for use in oil-field drilling and metal fabrication dramatically increased its revenue guidance for the current quarter from what it had expected when it issued its fourth-quarter financial report, projecting sales of $100 million for the first quarter of 2019. That's up from initial calls for $82 million to $85 million, and DMC said that its DynaEnergetics oil-field products business saw a sharp rise in demand for well-perforating systems. Sales for DMC's NobelClad metal fabrication division were less impressive but still better than expected. If conditions in the energy industry continue to go as well as they have recently for DMC, then shareholders can hope for explosive gains in the stock's price as well.