In late 2017, Apple (NASDAQ:AAPL) launched three new iPhones. Two -- iPhone 8 and iPhone 8 Plus -- were identical in form factor and screen size to their last several predecessors. The third model, iPhone X, represented a big departure for the iPhone lineup, incorporating a new all-screen design, a depth-sensing front-facing camera, and an organic light-emitting diode screen, which helped to boost image quality. 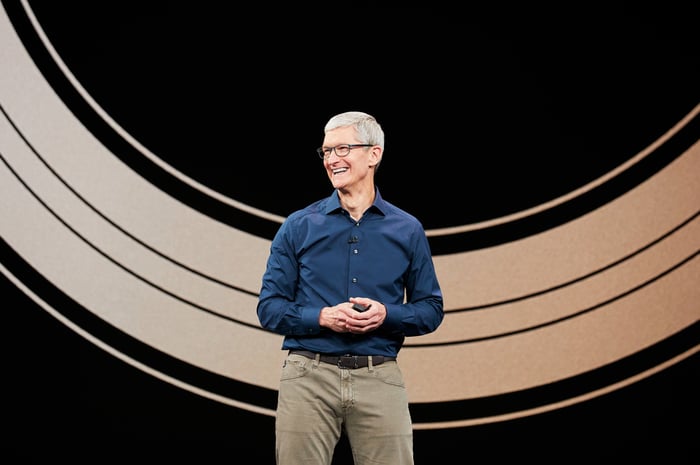 Apple is expected to stick to those same screen sizes and general form factors for the iPhones that it'll launch later this year. However, in 2020, Apple is set to entirely rethink the screen sizes and the screen technologies that it deploys across its product stack, according to a new report from DIGITIMES. Let's take a closer look.

DIGITIMES claims that Apple's 2020 iPhone lineup will do away entirely with LCDs -- OLED screens will become the norm across the board. This should help Apple's lineup appear more competitive, given that OLED screens are viewed as the premium option these days while LCDs are seemingly synonymous with legacy technology. OLED screens also tend to come in higher resolutions than their LCD counterparts due to differences in the subpixel arrangements of each respective technology, making OLED screens more easily marketable.

If true, what Apple is doing is widening the range of its iPhone screen sizes. The 6.06-inch iPhone should be the company's mainstream model, essentially replacing both the 6.1-inch LCD and the 5.8-inch models in one shot. The 6.67-inch model looks like a natural successor to the 6.5-inch models -- customers who like big screens will probably value the additional screen real estate, especially if Apple can engineer the new 6.67-inch model to fit in the same physical footprint that today's 6.5-inch iPhone XS Max does.

The 5.42-inch model looks quite interesting. It's likely that this would be positioned as the cheapest of its 2020 iPhone trio and could help the iPhone lineup appeal to a broader audience. There may be quite a few iPhone customers who simply don't want something as large as the current 5.8-inch iPhone XS or 6.1-inch iPhone XR but at the same time want the latest technologies that Apple has to offer. Such a device -- especially if it has a high screen-to-body ratio -- could be very tempting to those types of customers.

Given that Apple is struggling with declining iPhone unit sales, enhancing its product portfolio to appeal to a broader audience is absolutely the right move.

Now, it's certainly not guaranteed that DIGITIMES' reporting on the 2020 iPhone screen sizes is accurate -- sometimes news sources get things wrong, and other times, plans simply change. However, I think that what DIGITIMES is reporting not only passes a basic sanity check but actually makes a ton of business sense, too.

The combination of these new screen sizes, the usual processor upgrade, the addition of 5G capability, and whatever improvements the company makes in terms of the camera subsystems should all coalesce into an interesting set of products that could help give Apple's iPhone business a boost.