Both stocks have been successful so far in 2019. Shares of GW Pharmaceuticals have soared by 72%, with Corbus stock jumping 27% year to date. But which of these two cannabinoid-focused biotech stocks is the better pick now? 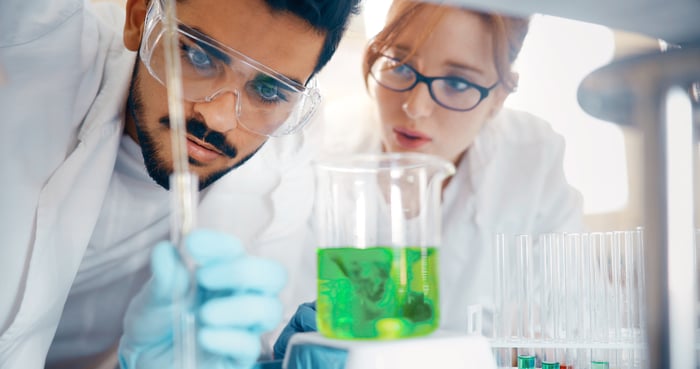 Any argument for buying GW Pharmaceuticals stock has to start with Epidiolex. It's the first plant-based cannabinoid drug ever approved by the U.S. Food and Drug Administration (FDA). And the drug is off to a great start after its U.S. commercial launch in November 2018.

GW reported better-than-expected Q4 results in February thanks to a solid performance for Epidiolex. The biotech was able to line up reimbursement coverage for the drug right out of the gate. GW's sales team also performed admirably in reaching out to physicians.

There are several reasons why the story should get even better for GW Pharmaceuticals. Epidiolex is likely to pick up more momentum with more state Medicaid plans covering the drug and as patients and physicians learn more about it. GW hopes to receive a positive recommendation from the European Medicines Agency's Committee for Medicinal Products for Human Use (CHMP) for approval of Epidiolex as a treatment for Dravet syndrome and Lennox-Gastaut syndrome (LGS) within the next few months.

Epidiolex could also potentially treat other indications beyond Dravet syndrome and LGS. GW expects results from a phase 3 clinical study evaluating the drug in treating tuberous sclerosis complex (TSC) in the second quarter. If those results are positive, the company could file for FDA approval in the added indication by the end of 2019. In addition, GW plans to soon initiate a phase 3 study of Epidiolex in treating Rhett syndrome.

GW Pharmaceuticals' pipeline also includes other candidates. The biotech expects to start a pivotal study for Sativex in treating multiple sclerosis spasticity in late 2019 in hopes to win U.S. approval for the drug that's already on the market in several other countries. GW is evaluating another cannabinoid, cannabidivarin (CBDV), in clinical studies targeting the treatment of autism, Rhett syndrome, and seizures.

The case for Corbus Pharmaceuticals

The top reason to like Corbus Pharmaceuticals is its lead candidate, lenabasum. Corbus' presentation at the Oppenheimer Healthcare Conference in March reminded investors about the potential for the synthetic cannabinoid drug.

Corbus is currently evaluating lenabasum in two late-stage studies. The biotech expects to report results from the phase 3 study of the drug in treating system sclerosis in the first half of next year. If all goes well, Corbus could file for FDA approval by late 2020. The company also initiated a phase 3 study of lenabasum in treating dermatomyositis in December 2018.

In addition to these late-stage studies, Corbus has a couple of phase 2 clinical studies for lenabasum underway. Results from a study of the drug in treating cystic fibrosis (CF) should be available next year. The biotech also has a large phase 2 study of lenabasum in treating systemic lupus erythematosus (SLE) in progress.

Corbus CEO Yuval Cohen stated in the company's Q4 conference call that there's "a significant market opportunity" for lenabasum in the initial three indications of system sclerosis, dermatomyositis, and CF. He said the drug could potentially generate up to $5 billion annually.

The biotech's pipeline also includes a library of more than 600 preclinical compounds that bind to the endocannabinoid system. Corbus' top candidate from this group currently is CRB-4001. The company is planning to begin a phase 1 study of the drug this year in treating non-alcoholic steatohepatitis (NASH) and expects that the National Institutes of Health will follow up with a phase 2 study.

Corbus Pharmaceuticals likely has more room to run. If the company reports positive results from its phase 3 study of lenabasum in treating systemic sclerosis, it wouldn't be surprising for the stock to skyrocket. However, in my view, the better buy right now is GW Pharmaceuticals.

GW's U.S. launch of Epidiolex has gone really well. I think the odds are good that the biotech will win European approval for the drug. GW also has potential catalysts on the way with its late-stage TSC study results. Both GW Pharmaceuticals and Corbus face plenty of risks, but GW is the less risky of the two stocks.

I have liked GW Pharmaceuticals for a long time, but despite picking it over Corbus, I'm leery of calling the stock as a buy now. My concern is that much of the company's growth prospects are already baked into the share price after GW's remarkable run. Positive news from its pipeline in the future could make me regain my enthusiasm for GW, but for now, I think there are even better stocks for investors to consider buying.