Besides being the cornerstone of both personal and professional relationships, trust is a vital quality in the relationships between investors and the management teams of companies found in their portfolios. Once trust erodes, management's words carry little weight. And for longtime followers of Plug Power (NASDAQ:PLUG), in particular, this resonates loudly.

Maybe it was management's suggestion, made in 2013, that the company would achieve a semblance of profitability in 2014 -- which it didn't. Or maybe it was management's forecasts, made in 2016, regarding the company's gross margins and cash flow in 2017 -- which it missed. Or maybe it's something else. Whatever the case, management is keen on restoring trust with its shareholders, and to this end, it recently took steps to improve the lines of communication when Andy Marsh, Plug Power's CEO, held Ask Me Anything (AMA) sessions on Quora and Reddit. Additionally, management is attempting to further instill trust in investors by putting its money where its mouth is. 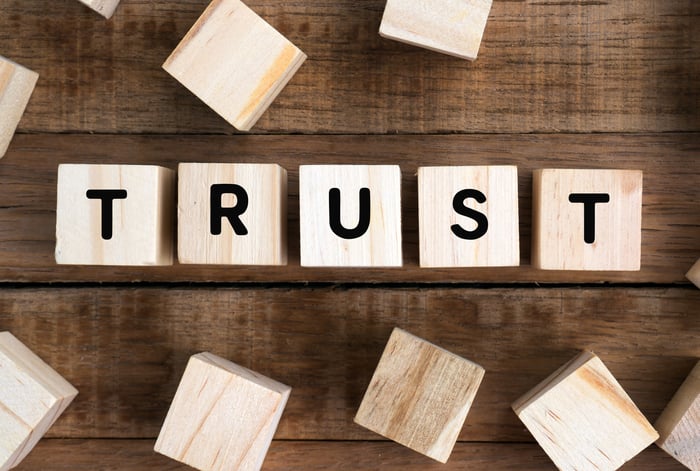 During the session on Quora, Marsh addressed a variety of topics, including the company's numerous opportunities. For example, in terms of markets that extend beyond the company's core competency -- material handling equipment -- management seems to be keen on extending its relationship with telecommunications companies, something touched on during its most-recent conference call. In responding to a question regarding the 5G upgrade, Marsh touted the company's "work in providing hydrogen fuel cells for backup power to communications providers including AT&T, Southern Linc, Sprint, and Verizon to ensure their networks keep working even when utility power is down." Marsh went on to say:

A proven higher reliability and performance in the face of natural disasters and intelligent remote management all contribute to make fuel cells an ideal solution for increasingly critical 5G deployments. We see this as a major area of opportunity and expansion for stationary power solutions from Plug Power as the 5G upgrade progresses.

But he didn't stop there. The subject of 5G also came up in his AMA on Reddit. On this occasion, however, Marsh specified that the 5G upgrade opportunity in Europe seemed less likely, since backup power is needed less there, due in part to less severe weather. The color regarding Europe is important, as it provides investors with a more specific sense of what they can expect regarding the 5G upgrade.

...and a retrospective miss

While the commentary regarding 5G was valuable, providing some insight into where the company could potentially prosper, management arguably gained more brownie points with investors by addressing an area that seems less hopeful: China. Back in 2016, China appeared to be the land of opportunity for the fuel cell industry. At the time, Marsh stated that the nation "has made hydrogen and fuel cell vehicles a key component of the country's Energy Revolution Program, which includes over $100 billion in investment and runs through 2030." In the intervening years, however, the company has apparently failed to make progress in the Asian market.

In responding to a question regarding the memorandums of understanding inked with two Chinese vehicle manufacturers in 2016, Marsh revealed that the partnership fell apart when one of the manufacturers, specialty vehicle maker Dongfeng, found itself on less-than-firm financial footing, partially due to unreliable Chinese subsidies.

For investors wondering whatever happened to Plug Power's foray into the Chinese market, the insight Marsh provided was valuable and, arguably, helped in rebuilding trust, since there hadn't been much transparency regarding this issue. In light of the fact that one of Plug Power's fuel cell peers, Ballard Power Systems, has recently faced some challenges regarding its partnerships with Chinese manufacturers, Marsh's revelation that the company was distancing itself from China in order to maintain its financial fortitude seems especially wise.

Making itself available to the public can go a long way in building confidence with investors, but skeptics would argue that talk is cheap. Management's decision to put its money where its mouth is, therefore, may say a lot more to the company's critics than Marsh's decision to answer questions on a couple of discussion websites. Consistent with a mid-January blog post on Plug Power's website announcing his intent to adopt a 10b5-1 stock trading plan, Marsh followed through recently in a $30,000 transaction in which he bought 12,286 shares at an average price over $2.44 on the open market. The deal raises his stock position to 465,145 shares.

In another transaction illustrating insider confidence, George McNamee, Plug Power's chairman of the board, purchased 100,000 shares on the open market in a transaction valued at roughly $234,000, increasing his position to 826,282 shares.

In and of themselves, the two transactions are notable, as they demonstrate confidence in the company's future, but they stand out even more considering shares hadn't traded this high since January 2018, and insiders hadn't made open-market purchases since September 2017, according to Morningstar.

With a track record of providing auspicious financial outlooks and failing to deliver, Plug Power has for some time failed to generate trust among its shareholders. Management's decision, however, to make itself available to the public through forums on Quora and Reddit -- not to mention open-market stock purchases by company insiders -- reveals that maybe the tide is starting to turn. Should the company succeed in meeting its 2019 forecast of achieving positive adjusted EBITDA, this will represent an even greater stride in rebuilding trust with investors.