Shares of Carvana  (NYSE:CVNA), an online car-selling and financing platform aiming to remove the traditional auto-dealership infrastructure, popped 33% in March thanks to multiple moves aimed at bolstering its top and bottom lines.

One development that sent its stock up mid-March is a little complicated. Carvana filed an ABS-15G report for asset-backed securities known as Carvana Auto Receivables Trust 2019-1. Essentially, Carvana can pool a batch of its loans and sell them to third-party investors in a move that will lower its risk and its cost of funds, and improve its financing income.

"This transaction is an exciting development for Carvana's financing platform," CEO Ernie Garcia said in a press release. "Our inaugural transaction introduced our product to the market, was well received by investors, and marked a significant step toward achieving our long-term financing profitability goals."

In addition to bolstering its financing business, Carvana made multiple moves to expand its footprint and its operations. One move was unveiling a new car-vending machine (which is more important than many realize) in Pittsburgh. Standing eight stories tall and holding 27 vehicles, the intriguing vending machine will help drive its brand image, marketing, and ability to deliver a better consumer experience. 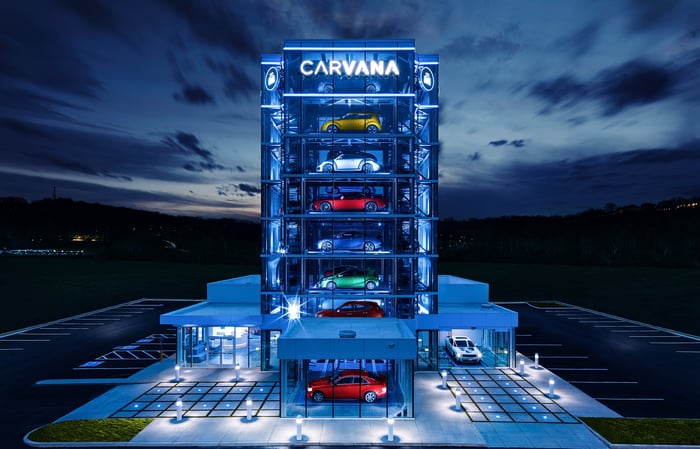 Last, but not least, was the announcement of Carvana's newest vehicle inspection center, which improves production capacity to meet growing demand as the company continues to rapidly expand into new markets. Carvana's inspection center will improve the company's ability to inspect, test, repair, and paint its vehicles and reach more of the Midwest population with as-soon-as-next-day delivery.

Investors should also note that Carvana entered March with a wave of momentum from its Feb. 27 fourth-quarter financial result that highlighted a 105% increase in retail units sold, a 121% increase in revenue, and a 156% increase in total gross profit, versus the prior year.

Looking beyond March, the company has two primary goals: expand efficiently and improve its gross profit per unit (GPU). Already in April, the company is having a huge week in California, another key growth state. It launched operations to offer as-soon-as-next-day delivery in Modesto, Salinas, Santa Cruz, Stockton, Vallejo, and Visalia, bringing its total number of California markets to 13, and 115 markets across America.

It's clear the company is expanding well, and that's boosting investor optimism around its growth story. But equally important will be the company's ability to improve GPU, which it has a track record of doing successfully. Consider that in 2015, Carvana posted $206 GPU, which exploded to $2,133 GPU in 2018, and is expected to reach $2,650 in 2019. CarMax's comparable figure for GPU was roughly $3,811 during fiscal 2018 -- so Carvana has room for improvement and growth.

Carvana is up nearly 90% year to date. With plenty of room for top-line and retail sales growth and higher GPU, and more opportunities to place car vending machines to drive its brand image, there's plenty of reason to expect more strong months for the online car dealer.