Please ensure Javascript is enabled for purposes of website accessibility
Log In Help Join The Motley Fool
Free Article Join Over 1 Million Premium Members And Get More In-Depth Stock Guidance and Research
By Brian Feroldi - Updated Apr 6, 2019 at 10:59AM

It was a rough quarter all around for the niche retailer.

Duluth Holdings (DLTH 4.58%), a purveyor of goods that are focused on the needs of tradespeople, reported its fiscal fourth-quarter and full year results on Thursday.

New store openings helped drive a 15% jump in sales, which sounds good at first glance, but that's a sharp deceleration from last quarter's results. What's more, the lower-than-hoped-for sales combined with rising expenses to result in a big miss on the bottom-line. 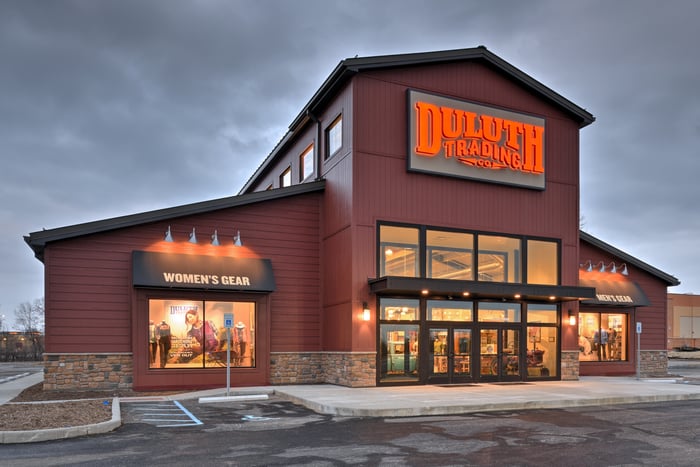 CEO Stephanie Pugliese did her best to keep her commentary positive, but openly acknowledged that end of the fiscal year had been rough:

While we achieved solid growth in 2018 and marked our 36th consecutive quarter of increased net sales year-over-year, we faced some challenges in the fourth quarter that pressured our full year results.

On the conference call with Wall Street, Pugliese shed additional light on the causes of the slowdown:

On a macro level, we were not immune to the overall slowdown in consumer spending, and we felt the impact of lower traffic across all of our channels. Internally, we encountered some challenges with systems implementation and late deliveries of product. As a result, we had inventory that was misaligned to the timing of sales and not distributed optimally throughout the network. This affected store productivity and added extra cost throughout the system, and some of our high-demand product didn't hit the market in time to reap the full benefit of the holiday season.

Here is what management projects will happen in fiscal 2019:

Wall Street wasn't happy with this report, nor with the guidance, and traders sent the stock down more than 20% in response. Given the sluggish sales growth, margin pressure, and flat net income for the full year, that decline looks justified.

Management has a lot of work to do in 2019 if it wants to earn back Wall Street's trust. When Duluth first came public, it was viewed as a high-growth stock that had an enormous growth runway ahead of it. That opportunity still exists today, but a big slowdown in sales growth is not something that growth-focused investors like to see. That's doubly true when it is accompanied by deteriorating margins and flat earnings.

The pressure is on for management to deliver on its 2019 targets and accelerate top-line growth. If they can achieve that, then shares at today's prices will look like a bargain. However, if the retailer's lower growth rate and margin profile are here to stay, there could be more pain on the horizon for shareholders.

Personally, I still see reasons for long-term optimism, but this report has tempered my enthusiasm for this stock. I won't be rushing to buy it until and unless management demonstrates that its strategies are resulting in meaningful bottom-line growth.