The retailer aimed at the teen and tween market adds to its winning streak.

No one was expecting Five Below (FIVE 0.76%) to have a bad fourth quarter. Rather, the question was how good would it be? As we've now discovered, the answer to that question was: really good!

The teen and tween retailer beat analyst expectations on the top and bottom lines, and has ambitious growth plans to further build on its success. More stores, more opportunities, and greater growth are all in the cards for Five Below. Here's a look at where this specialty retailer may be heading. 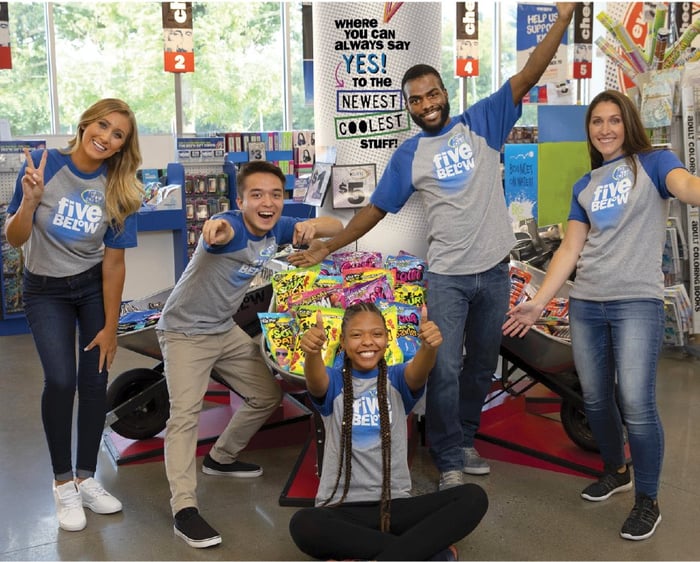 Five Below's unique sales proposition means it can maintain its blistering expansion and not have to worry too much about cannibalizing sales. It advertises itself as "a store with unlimited possibilities where tweens, teens and beyond are free to Let Go & Have Fun in a color- popping, music pumping, super-fun shopping experience where you'll always find the coolest stuff for $5 or less." The company signaled it has no intention of letting up the growth pace, as it plans to open between 145 and 150 new stores in 2019, a jump of roughly 20% that would give it as many as 900 locations by year's end.

Because around 80% of the retailer's revenue growth comes from new stores, investors should expect that the chain will be able to continue growing revenue at the high end of where it's been. In the fourth quarter, sales grew to $602.7 million, a 23% increase after subtracting the extra sales week in 2017.

While many of the new stores will be in markets that already have a Five Below, the chain will also be entering three new states (Iowa, Nebraska, and Arizona). By the end of 2019, Five Below plans to be in 36 states and the District of Columbia.

Because Five Below offers deeply discounted items, it's not a destination store that consumers drive out of their way to visit. That means it is able to open more stores nearer to existing locations without having to worry about eating into comp-store sales.

Raising the bar, and the prices

Profits also grew in the most recent quarter, with net income rising to $89.2 million, or $1.59 per share, a calendar-adjusted 35% increase over the $1.21 notched last year.

Five Below is toying with a plan to increase those profits. It is in the early stages of testing a Ten Below concept that offers higher-priced items. In some stores, it's just a bin of more expensive goods; in others, it's an aisle. Within the past few weeks, it has also made these "10 Below" items available online.

Investors going into the most recent quarterly report had questions about the role the Toys R Us bankruptcy might have had in the quarter's sales. Although management didn't put a dollar amount to it, CEO Joel Anderson said during the conference call with analysts that "the outperformance was largely due to toys. ... as far as will it continue? Look, we have no reason to think it wouldn't. Every time we've had a trend, new customers are exposed to Five Below. They like what they see, and the continue to come back."

Five Below doesn't have direct data on repeat customers because it doesn't have a loyalty program, though it is working on one and customers may see it in 2020.

Five Below had another strong year, even going up against tough comparables from the previous year, and the first quarter of 2019 is not expected to be any different. It should also get some lift from having Easter fall three weeks later in April this year, which should help preclude the possibility of a winter storm keeping customers away, as happened last year.

With a solid business model, a strong expansion plan, and no real competition targeting the same demographic, there's good reason to believe Five Below's growth story has many more chapters ahead.

Editor's note: This article has been corrected. Ten Below is not a chain.