Shares of Southern Copper (NYSE:SCCO) an industry leader in copper production, rose 11% last month, according to data from S&P Global Market Intelligence. The stock's upward movement is unsurprising, considering the similar uptick in the price of copper throughout the month. But the stock's rise is attributable to much more than merely this.

The stock's rise in March is an extension of a climb that began in mid-February, after the company reported Q4 2018 earnings. In addition, management's intimation that the company may be expanding beyond its expertise of copper, molybdenum, zinc, and silver mining gave additional life to the share price. 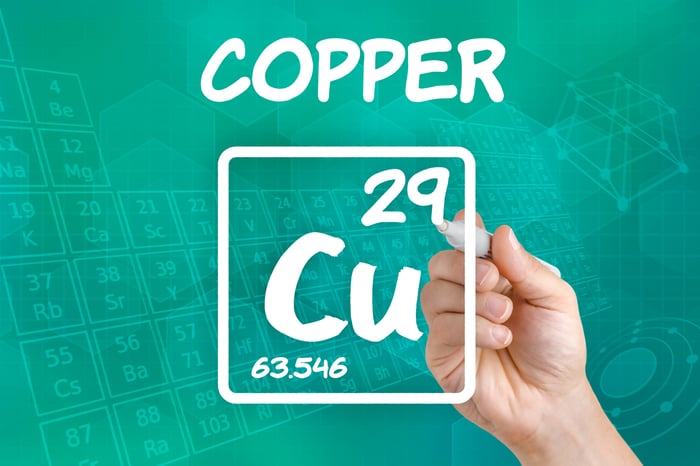 Besides the rise in the market price of copper, investors continued to respond strongly to the Q4 earnings report revealing that the company achieved a company record for annual net sales of $7.1 billion. Beyond the top line, there were more reasons to celebrate, including the company's $1.54 billion in net income, which represents 112% year-over-year growth. Although management chalked up the earnings growth "to the one-time, non-cash income tax adjustment of $785.9 million recorded in 2017" and not operational improvements, it didn't seem to bother investors. Perhaps that was due to the luster on the cash flow statement, where the company reported 2018 operating cash flow of $2.24 billion, a 13% year-over-year increase, which management attributed to "strong cash generation from operations due to higher sales volume and metal prices."

Lastly, investors took note of management's apparent interest in diversifying its portfolio. Speaking with Reuters last month, Oscar Gonzales, Southern Copper's CEO, revealed that company officials had visited a lithium project in Mexico. Gonzales characterized lithium as "interesting and profitable," though he indicated that the company hadn't made an offer on the project.

For investors interested in gaining exposure to copper, this industry stalwart provides a compelling opportunity. While the continuing rebound in the copper market may help the company's financials -- and excite investors -- even further, management's interest in the Mexican lithium project should give investors pause, as it raises the question of whether the potential reward of diversifying its portfolio with the new metal outweighs the risk. In any case, it's a development worth following closely.