Tencent’s largest investor is a public company, too.

There's an awful lot to like about Chinese internet giant Tencent (TCEHY 3.69%).

It's the world's largest video game distributor and an investor in many of the world's leading video game studios. It owns China's "super app," WeChat, which more than a billion people use for everything from social networking to paying bills to hailing rides and much, much more. Tencent is also the company behind TenPay, which many Chinese use for payments instead of credit and debit cards. Tencent also has a high-growth cloud computing business that seems poised to own a large portion of the Chinese cloud infrastructure market. Finally, Tencent is one of the world's largest venture capital investors, with over 700 investees around the world, including more than 100 valued over $1 billion.

However, did you know there is a way to invest in Tencent besides its U.S.-listed American depository receipt or its listing on the Hong Kong exchange? In fact, it might actually be a much better way to invest in this all-star company. 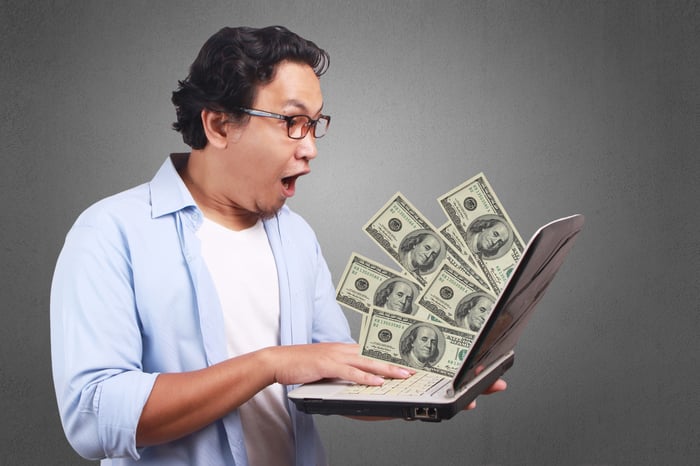 Get to know Naspers

Tencent's largest investor is South African venture capital firm Naspers (NPSNY 1.29%), which owns 31% of the Chinese giant thanks to its savvy 2001 investment when Tencent was a small web start-up. That $32 million investment is now worth roughly $140 billion..

What's interesting is that Naspers' entire stock actually trades at a sizable discount to the value of its Tencent holdings, despite also being invested in many other global internet, e-commerce, and media start-ups. Naspers' current market cap sits at a surprisingly large 30% discount to just its Tencent stake, with all its other investments thrown in on top, so there is a substantial opportunity here.

The reason for the gap is that Naspers has grown -- mostly thanks to Tencent's precipitous rise -- to represent a huge 25% of the South African stock market. As such, many portfolio managers have to sell Naspers shares due to allocation constraints.

However, Naspers just made a big move that could change the game.

Naspers has decided to separate its South African assets from the rest of its global internet assets, which includes Tencent. The global internet assets will reside in a new company, temporarily referred to as "NewCo," traded on Amsterdam's Euronext exchange. Naspers will retain a 75% stake in NewCo, with another 25% of the shares free-floating and traded independently on Euronext. Currently, the plan is for existing Naspers shareholders to receive shares of NewCo. A response to an email I sent to Naspers investor relations did not specify how that would be distributed to Naspers' ADR holders (in NewCo shares or NewCo ADRs), as those details have apparently not yet been finalized.

NewCo will be one of the largest tech companies listed in Europe, with a valuation that could be close to that of Europe's largest tech company, SAP, which has a market capitalization of about 120 billion euros.Naspers could have chosen a U.S. exchange, but the company said since many of its employees are based in Amsterdam, it made sense to go with Euronext.

In addition to the new listing, Naspers has already taken some measures to limit its size in its home country. The company recently completed a spinoff of its South African satellite TV business called Multichoice Group.

These spinoffs and asset sales could help shrink the size of Naspers' South African-listed shares, and therefore allow more portfolio managers to own the stock.

In addition to its stake in Tencent, NewCo's other notable holdings include Russian social media platform Mail.ru, Indian e-commerce start-up Swiggy, German food delivery app Delivery Hero, and Indian travel website MakeMyTrip. These companies are relatively tiny compared to Tencent, but as they are high-growth start-ups, that could change in the years ahead.

Tencent at a discount

As part of the issuance, an exact date has not been given, current Naspers shareholders will have the choice of receiving either NewCo shares or more shares of Naspers, up to certain limits, according to the company press release. I would probably take the NewCo shares, as Naspers will still make up a large portion of the Johannesburg Stock Exchange even after the spinoff. So, I think NewCo shares would probably rerate more quickly than the Naspers shares, which may still run up against resistance on the JSE, due to its size.  However, there are still some details to be worked out, so Naspers shareholders should monitor the mechanics behind the new share issuance.

The rerating of Naspers to full value may therefore take some time, or may not happen, due to the vagaries of operating in different exchanges and currencies. However, I recently traded my Tencent stake for Naspers on the news.

Naspers has shown itself to be a savvier international investor than I could probably be, and investors are now not only getting Naspers' Tencent stake at a discount, but several promising other investments on top of that at no extra cost. Now that management has made a clear effort to try to close the sizable valuation gap with its Tencent holdings, I've recently come on board with this "Tencent alternative."