A big new project is finally on the way from Las Vegas Sands.

The next phase of expansion for Las Vegas Sands (LVS 0.11%) is here, and it couldn't have come from a better place: Singapore's government has agreed to allow an expansion to Marina Bay Sands that will add 1,000 hotel rooms and even more meeting and convention space.

Marina Bay Sands is the company's most profitable resort, so adding more space is a big deal. And with results at the resort declining in 2018, the expansion could bring a much-needed boost in demand. 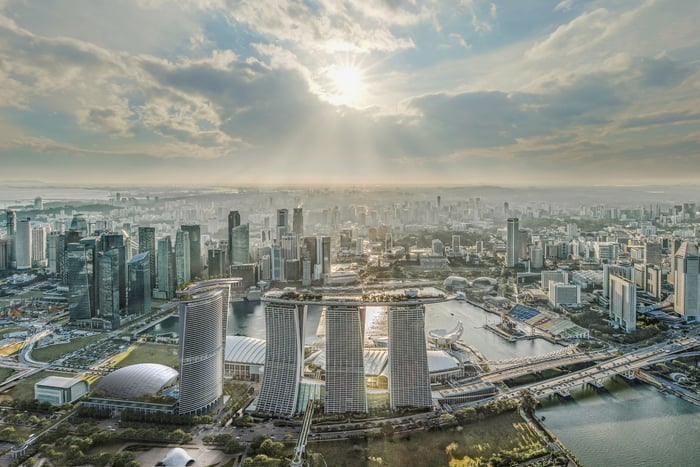 The agreement to expand Marina Bay Sands (seen on the left side of the image above) includes a 15,000 seat arena, meeting space, and a hotel tower with about 1,000 rooms. Las Vegas Sands' press release says the arena will attract "top entertainers", something the company has experience with given its arena in Macau.

The $3.3 billion cost of Marina Bay's expansion would make the expansion alone one of the most expensive resorts or casinos in the world. Interestingly, the casino isn't a key part of the expansion. The Straits Times reports that a casino expansion for high rolling tourists would be part of the project, but mass market gaming won't be included.

Each part of the expansion will generate revenue for Marina Bay Sands, but the hotel tower will be key. The original towers generated $404 in revenue per available room in the final quarter of 2018, which would equate to about $147.5 million in total. Based on performance at the rest of the resort, we should expect food, beverage, and convention space to generate somewhat less revenue than that. It'll be tough to justify a $3.3 billion price tag on non-gaming alone, but the investment may be needed anyway.

Why an expansion is needed

Make no mistake, this expansion is in part to the keep the government happy: The governments of Singapore and Macau view gaming as a necessary part of meeting their goal of being destinations for visitors around the world. That's why expansions in both regions are often based on non-gaming assets like arenas and convention space, not the casino floor.

Marina Bay Sands may also need a jolt of energy given recent performance. In 2018 revenue was $3.1 billion, down 2.1% from a year ago, and property EBITDA was $1.38 billion. That's down from $1.72 billion of property EBITDA generated in 2014, the peak year for the resort.

Management expects the expansion to bring more conventions and tourists to the resort. And if a significant number of guests are high rollers, it could drive more revenue from the casino.

There's no question Las Vegas Sands' management sees its future in Asia. And with gaming concessions in Macau and Singapore being its most valuable assets, it's important to make governments happy. Expanding Marina Bay Sands with mostly non-gaming assets is part of that strategy, and it may be the right move if it keeps the company's concession long-term.