Once again, the Amazon-owned grocery chain is making a big deal about price cuts that only apply to a small proportion of the items it carries.

Yet it was fitting that the price-cut announcement came on April Fool's Day, because it was a bit of a joke. Prices for the vast majority of items sold by Whole Foods are staying put, and the high-end grocery chain has even raised the prices of numerous items in recent months.

Price cuts coming -- but only for a few items

Amazon and Whole Foods say that they have lowered prices on "hundreds of items throughout the store" this week, with a particular focus on produce and meat. The price reductions, which went into effect on Wednesday, average 20%.

This may seem impressive at first glance. But while the price cuts will touch more than 500 items, according to The Wall Street Journal, a typical Whole Foods store carried nearly 35,000 SKUs (stock keeping units) as of a few years ago -- and some of its stores carry up to 55,000 items. In other words, Whole Foods has reduced the prices of only 1% to 2% of the items in any given store. 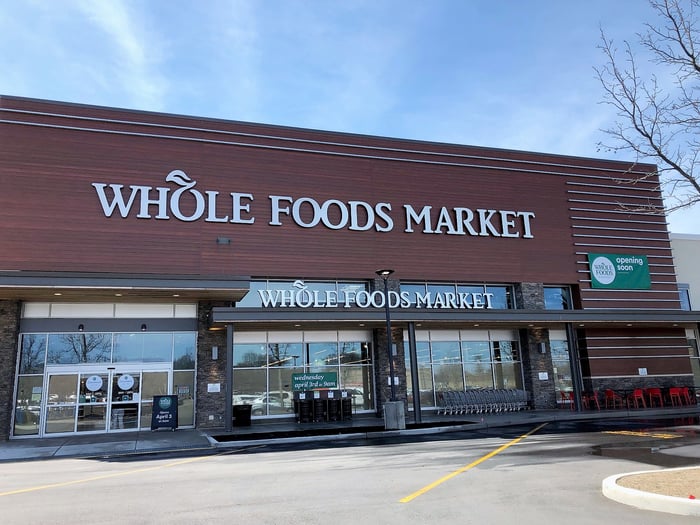 Whole Foods recently cut its prices -- but only for some of its items. Image source: Whole Foods Market.

Thus, it's not too surprising that The New York Times found that a basket of 13 staple items cost only $0.05 less on Wednesday -- after the price cuts went into effect -- than it did on Tuesday, at least for customers without a Prime membership. (Moreover, the savings came from a slight reduction in the amount of tax charged. The total before tax was the same.)

Amazon Prime members may see greater savings, as Whole Foods is doubling the number of weekly Prime member discounts. Still, with "more than 300 Prime member deals" coming "over the next few months," it appears that these exclusive deals will target even fewer items than the price cuts that are available to everyone.

Meanwhile, prices have risen elsewhere in the store

In another wrinkle, Whole Foods has raised prices on many items in recent months, after giving in to the pleas of vendors facing rising costs.

For example, The Wall Street Journal reported that price increases ranging from $0.10 to several dollars went into effect for dozens of items earlier this year. An even broader price increase covering 550 products was implemented last December.

As a result, Telsey Advisory Group found that the price of a basket of 40 selected items had risen by more than 3% as of January, relative to the fall. It's not clear whether this month's price cuts will fully reverse that increase.

This isn't the first time that Amazon has advertised big price cuts for Whole Foods that haven't lived up to the hype. Indeed, Amazon made headlines by slashing lots of prices as soon as it bought Whole Foods in August 2017. Yet within just a month, prices started creeping upward again.

To be fair, prices at Whole Foods appear to have declined on average since Amazon acquired the chain. However, deflation has been common across the entire grocery industry in recent years. Some prices have gone down, some have gone up, and some have stayed the same at Whole Foods -- and the same could be said for pretty much any other grocer you could think of.

Perhaps the price gap between Whole Foods and its competitors has narrowed a bit over the past two years, but shopping at Whole Foods is still dramatically more expensive than shopping at a typical supermarket -- let alone a discounter. Amazon hasn't given bargain-seeking shoppers any reason to think that will change in the foreseeable future.