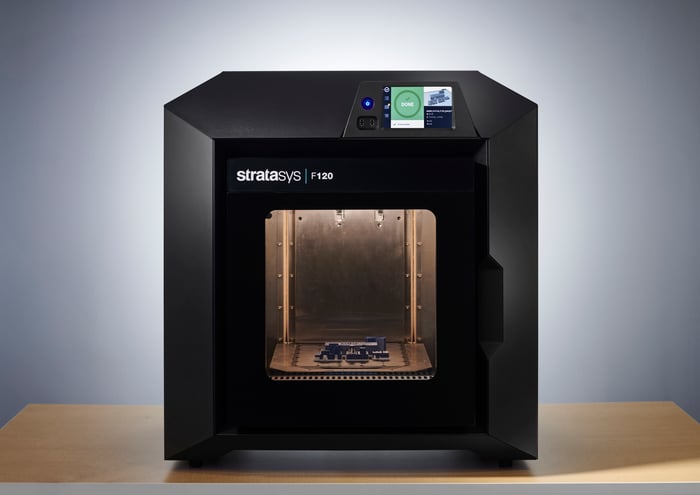 Investors were probably disappointed with softness on the top line, as revenue came in at $177.1 million, compared with $179.3 million in the year-ago quarter. Management attributed that weakness to the U.S. government shutdown and soft demand in the automotive sector in Europe.

The bottom-line performance was much better. Non-GAAP earnings per share of $0.21 beat Wall Street's expectations by $0.01 and represented an improvement over the year-ago quarter's $0.16 in adjusted earnings per share.

Interim CEO Elchanan Jaglom was pleased with the company's performance. He emphasized the company's profitability and pointed investors to the new products coming out to drive growth: "We are pleased with our fourth-quarter and full-year profitability and finished 2018 with record cash flow from operations as we continue to build a strong operational foundation for future growth opportunities and to invest in accelerating new product introductions to expand our addressable markets."

Stratasys isn't growing revenue the way it was five years ago. That trend probably won't change this year, either. Management's guidance is calling for revenue in the range of $670 million to $700 million in 2019, which isn't much better than the $663 million Stratasys generated last year.

Also, the company is currently without a permanent CEO. Shareholders will probably be happy with whoever takes over the reins, because, as Jaglom explained, all of the candidates the company has interviewed have "global operational experience and a strong history of growing large public companies and delivering significant shareholder value."

Looking beyond 2019, Jaglom says, "We're excited about our recent upcoming new product introductions that expand our addressable markets and believe we have a portfolio roadmap in place that will result in accelerated growth beginning [in] 2020."

Currently, analysts expect the company to report $711 million in revenue in 2020 and call for it to deliver 28% annual earnings growth over the next five years.