Please ensure Javascript is enabled for purposes of website accessibility
Log In Help Join The Motley Fool
Free Article Join Over 1 Million Premium Members And Get More In-Depth Stock Guidance and Research
By Adam Levine-Weinberg - Updated Apr 8, 2019 at 5:44AM

The federal government shutdown, a late-2018 stock market plunge, higher interest rates, and severe winter weather all weighed on U.S. auto sales in the first month or two of 2019. As a result, sales volume declined for the industry during the first quarter.

Like most other automakers, Ford Motor (F 3.89%) reported a year-over-year decrease in its Q1 domestic deliveries. However, outside of the passenger car market -- where the Blue Oval brand is in the midst of discontinuing most of its lineup -- Ford posted impressive growth in the first quarter. Sales trends could get even better later in 2019 and in 2020 as some of the headwinds that held Ford back last quarter start to fade.

Ford delivered 590,249 vehicles in the U.S. in the first quarter, down 1.6% year over year. The mass-market Ford brand posted a 2.1% sales decline, but deliveries surged 11.2% for the upscale Lincoln brand, building on Lincoln's return to growth in the last two months of 2018.

For the two brands combined, car sales plummeted 23.7% in the first quarter. Yet Ford offset nearly all of this decline with a 5% uptick in crossover/SUV deliveries and a 4.1% increase in the van and truck market.

Ford will continue to see steep declines in the car market over the next couple of years, as it discontinued Ford Focus production for the U.S. last May, ended Ford Taurus production last month, and is poised to stop building the Fiesta for the U.S. market in May. The Ford Fusion is also on the chopping block, but an end-of-production date hasn't been set yet. Fortunately, cars are already down to less than 17% of Ford's domestic delivery mix, which will temper the blow from discontinuing all of these models. 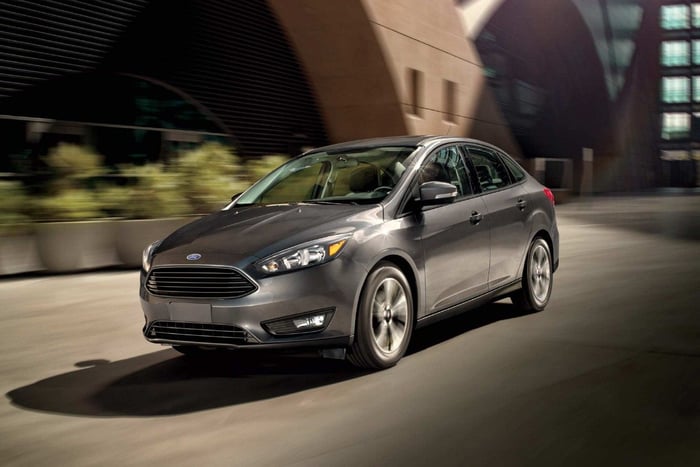 Ford is discontinuing most of its car models in the U.S. Image source: Ford Motor.

The only real knock on Ford's performance last quarter was that it benefited from a significant jump in lower-margin deliveries to rental car companies. That said, Ford plans to end 2019 with rental segment deliveries flat or down slightly year over year.

Growth in the most important market segments

Fresh products powered Ford's sales increases in the crossover/SUV and truck segments. The EcoSport launched in the U.S. at the beginning of 2018 and more than doubled its sales last quarter, as the subcompact SUV continues to gain momentum. At the other end of the spectrum, the Ford Expedition full-size SUV has seen strong demand ever since an all-new version hit dealer lots in late 2017. Deliveries surged 61.9% last quarter.

Ford also posted strong growth in the truck market, thanks to the relaunch of the Ford Ranger midsize pickup. Importantly, F-Series sales also ticked up slightly, indicating that the Ranger didn't meaningfully cannibalize sales of pricier F-150s. All told, Ford's truck sales rose nearly 5%, even though availability of the Ranger is still extremely limited.

Finally, Ford is growing in the luxury market again, as all four of Lincoln's crossover and SUV models posted double-digit sales gains last quarter. That more than made up for a 16.6% decline in deliveries of Lincoln's two remaining car models.

The rapid shift in Ford's sales mix from cars to crossovers, SUVs, and trucks drove a roughly 5% jump in its average transaction prices (ATPs) last quarter. ATPs increased $1,859 year over year -- more than double the industry average -- to around $38,000.

The upshot is that even with slightly fewer deliveries, Ford can deliver decent revenue growth via higher ATPs. This trend should continue for the next few years, as the shift away from cars won't be complete until at least two or three years from now.

A product refresh will add to Ford's momentum

It's notable that Ford managed to post growth in the crossover/SUV market last quarter despite sales declines for the Escape and Explorer models. Those two models -- which are badly in need of updating -- accounted for 59% of Ford-brand crossover and SUV sales in Q1. Fortunately, new versions of the Escape and Explorer will hit dealer lots later this year, which should boost sales of both models in 2020.

Ford also plans to increase output of the Ford Expedition and Lincoln Navigator this summer to meet red-hot demand. Additionally, at least two new Ford SUV models are set to debut in 2020 to rebuild the Blue Oval's position in the off-road market. Meanwhile, Lincoln is expected to launch two more all-new crossovers later this year.

Together, these moves should drive much faster growth for Ford in the crossover and SUV markets. Falling car sales may make it hard to deliver significant growth in total deliveries, but the ongoing shift toward pricier vehicles positions Ford for modest revenue growth and strong profit growth in the coming years.