GameStop’s stock is trading at bargain-bin levels. Is it cheap for a reason, or is the stock an opportunity?

GameStop (GME 2.38%) recently reported its fourth-quarter earnings, which disappointed many. Adding fuel to the pessimism, management -- which is still without a full-time CEO -- guided for 5%-10% same-store sales declines this coming year. New CEO George Sherman doesn't begin work until April 15, and uncertainty over the company's leadership and direction is adding even more uncertainty for investors.

But while operating results were bad, there are other numbers investors should also be aware of:

A forward price-to-earnings ratio of 5;

These metrics point to an absurdly cheap company, yet GameStop still has a healthy cash position, and though earnings are declining,  they're still positive.

So, has the market overreacted? 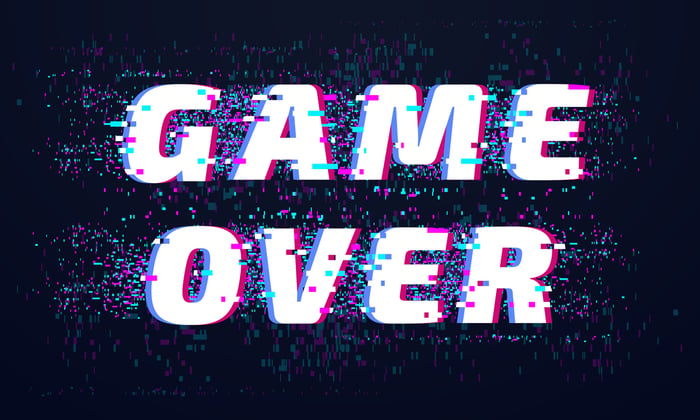 When a company appears headed down the drain, value investors might look to the balance sheet to assess its potential liquidation value, which could act as a floor under the price.

After GameStop recently sold off its non-core Spring Mobile division for $770 million, its cash balance surged to $1.62 billion, against just $821 million in debt. Net cash of $800 million is actually not too far below GameStop's current market cap of $1 billion.

However, there are other liabilities besides debt. These include accounts payable to suppliers, accrued expenses to employees, and deferred revenue to customers. These added up to about $1.8 billion at the end of the quarter.

Current liabilities usually line up with current assets, such as accounts payable, inventory, and other prepaid expenses. Non-cash current assets totaled about $1.5 billion at the end of the quarter, so the difference would decrease liquidation value by about $300 million.

Counteracting that $300 million deficit is the company's net property, plant, and equipment (PP&E), which currently sits at roughly $320 million, getting us back to roughly an $800 million in liquidation value.

The company also has about $600 million in other assets, such as goodwill, deferred taxes, intangible assets, and "other" non-current assets; however, those assets likely won't garner much in a liquidation, so let's discount these other intangibles to zero for the sake of conservatism.

Finally, though they don't show up on the balance sheet, a retailer's long-term leases are also liabilities. Fortunately for GameStop, the average lease on its stores is only two years, meaning there isn't too much risk of paying long-term leases on underperforming stores. For now, let's put these to the side.

Assuming some discounts for PP&E, inventory, and other fees, I think a $600 million-$800 million range for GameStop's liquidation value is reasonable, or $6-$8 per share. With a share price just under $10, the risk-reward equation does look compelling.

What can the company earn?

Still, liquidation value won't count for much unless the company liquidates, and it's possible the company's excess cash could get burned up by GameStop's turnaround efforts. GameStop management revealed general outlines of a plan in the fourth-quarter report but didn't get too deeply into details. Management says that it plans to cut $100 million from overhead costs by the end of this year and that it's investigating new business opportunities, such as esports, though details of how to monetize that were pretty vague. That's likely because management is awaiting direction from incoming CEO Sherman.

He'll have his work cut out for him. GameStop's pre-owned software sales, its most profitable segment, appears to be in terminal decline as consumers opt more for digital and streaming services, negating the need to buy and trade physical games. Pre-owned games sales were down 17.2% over the past two years, and pre-owned gross margin decreased at the even-faster rate of 20%.

New game software is experiencing a more moderate decline, but it also appears to be headed in the wrong direction, with new game gross profit down 12% since 2016.

Even though GameStop does have growth products, such as accessories, digital sales, and collectibles (including action figures, dolls, and shirts), the gross profit produced by all of these categories combined is still less than preowned software gross profit alone.

As a thought experiment, should preowned game gross profits fall to zero from the $810 million it generated last year, that would flip GameStop's operating earnings from roughly a $300 million profit to a $500 million loss, should overhead costs stay the same.

How long can you last?

The big question for GameStop's stock is if the company's software business will experience a slow decline or a sudden one. If the decline is slow and the company continues to wring out cash for several years, the stock could be a bargain. But if physical games are quickly disrupted over the next one to two years, shareholders could still lose out, despite today's dirt-cheap price.