Please ensure Javascript is enabled for purposes of website accessibility
Log In Help Join The Motley Fool
Free Article Join Over 1 Million Premium Members And Get More In-Depth Stock Guidance and Research
By Brian Stoffel – Apr 9, 2019 at 8:55AM

The second thing might surprise you for such a young company

This year is quickly becoming one where big names debut on the public markets. Lyft has already had its IPO, Uber will follow closely on its heels, and many are expecting Airbnb to go public soon as well. Lost in the shuffle is a smaller video conferencing company that has a lot going for it.

That company -- Zoom Video Communications -- intends to go public this month on the Nasdaq exchange with the ticker ZM. While there's no doubt the three aforementioned companies will get plenty of airtime over the coming months, savvy investors should keep an eye on this under-the-radar stock. 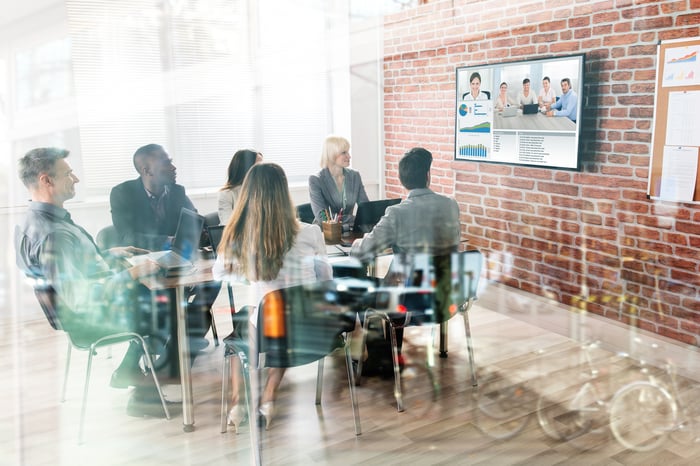 But first the basics

Eric Yuan was an engineering executive at Cisco, and consistently heard from clients that they were dissatisfied with their ability to conduct video conferencing. That feedback led him to strike out on his own, forming Zoom in 2011 with a simple mission: "to make video communications friction-less."

Now the company's CEO, Yuan has even said the company's ultimate goal is "to make Zoom meetings better than in-person meetings." That's a tall order, but -- as you'll see below -- one that customers are responding to.

Today the company offers a myriad of tiered subscription plans that lets customers enjoy the benefits of video conferencing from the cloud. They include:

Zoom also offers on-premise solutions that run $49.99 per month per room in which the video tools are located, and a mobile solution that runs $10 per month per user.

With those basics out of the way, let's dive into the three things you must know before Zoom's IPO.

Of course, none of this would matter if Zoom wasn't best in class. But based on a bevvy on online reviews, the company is head-and-shoulders above the competition.

Perhaps that's why a number of potential competitors -- including Microsoft, Atlassian, Dropbox, Google, LinkedIn, Salesforce, and Slack -- have decided to partner with Zoom and integrate its offerings. Those votes of confidence help to better understand how the company has been able to grow sales so quickly. 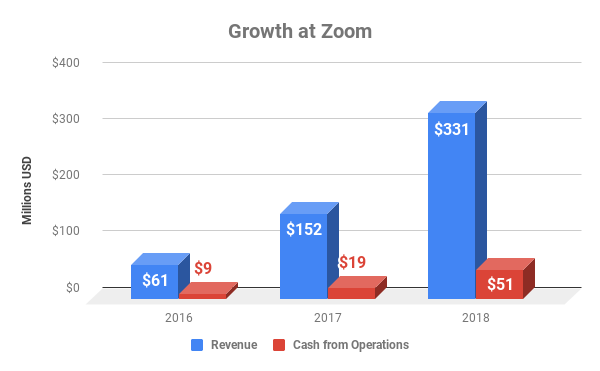 For those keeping track at home: Over the past two years, revenue and cash from operations have both grown by about 133% per year.

But there's even more evidence that Zoom is gaining a foothold. The company measures the number of customers with over 10 employees, and the number of contracts worth over $100,000 annually in subscriptions. Here's how those figures have progressed.

The contracts from companies with 10+ employees accounted for 78% of the company's revenue last year. And within that subset, those 344 contracts worth over $100,000 annually contributed 30% of total revenue.

Sales are one thing, but eventually a company has to turn a profit -- right? The Software-as-a-Service (SaaS) business model has convinced Wall Street that it's OK to forgo profits in order to gain long-term market share. That being said, without a plan for profitability, any stock can go to zero.

But with Zoom that shouldn't be as big of a concern. The company generated net income of $7.6 million last year, and free cash flow of $23 million. Zoom also has $176 million of cash and investments on its books, with zero long-term debt.

We already know this cash balance will go even higher after the company collects cash from going public. It could go as high as $524 million after proceeds from the IPO are collected.

It's also worth noting that, flush with cash from its IPO, the company may decide to invest aggressively in expanding both R&D and market share. This could temporarily push the company back into negative earnings and free cash flow. With a greater cash cushion and a demonstrated ability to achieve profitability, though, that's a trade many long-term investors should consider worthwhile.

3. A burgeoning moat is forming

With this success, it's doubtful the competition won't come clamoring. That's why it's vital to investigate whether the company has any moat, or sustainable competitive advantage.

I'll be the first to admit that, on the surface, I don't see anything that could stop a company from switching video conference providers at the drop of a hat. That would mean that Zoom would have to consistently offer up the best solution over time.

Having said that, there's evidence that a moat is forming. For starters, the company has an App marketplace that allows third-party app developers to build tools on top of Zoom's platform. Because Zoom has over 50,000 clients with more than 10 employees, it'll be a much more popular destination for app developers than a tiny start-up. These tools create incentives for more businesses to join the ecosystem, making Zoom even stronger.

And then there's the company's net-dollar expansion rate (NDER). This simply takes the total amount of annual recurring (read: subscription) revenue from existing customers at the end of Year One and compares it to the amount of revenue those same customers paid in Year Two.

By filtering out the effect of new customers, the NDER lets us know if customers are staying on board, and if they're adding more hosts and tools over time. Zoom only started reporting NDER in 2018's second quarter, but the results are eye-opening.

Here's what this means in plain English. Customers are not only sticking with Zoom (evidenced by an NDER of at least 100%), they are adding far more functionality year after year. In fact, the average customer spends 40% more every year with Zoom.

That means the tool is becoming more and more integrated within the culture and DNA of these companies. Over time, that could also lead to a widening moat via high switching-costs.

I'm not one to buy stocks immediately following their IPO -- shares tend to be high-priced and extremely volatile. That being said, I will be watching closely if/when the offering occurs later this month.

If you're really interested in the stock following its offering, I would suggest buying a small amount to start, and adding to it over time as you see how wide Zoom's moat really is.