Shares of Belgian biotech Galapagos NV (GLPG -0.91%) gained a healthy 15.3% last month, according to data from S&P Global Market Intelligence. What lit a fuse underneath this developmental-stage company in March? 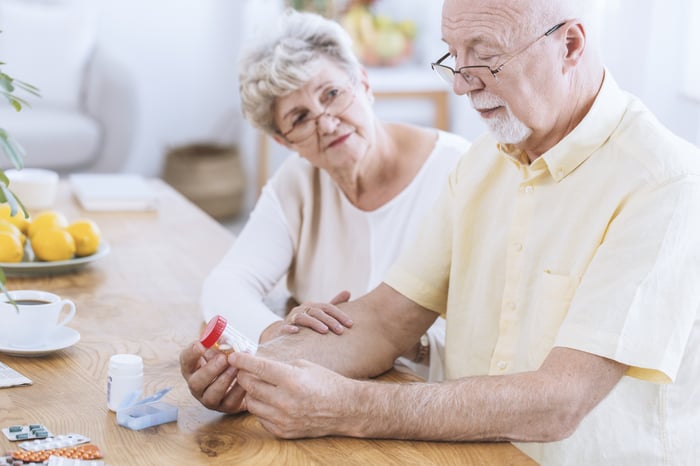 If the Food and Drug Administration green-lights this experimental anti-inflammatory drug for rheumatoid arthritis, it could end up generating sales of around $1.1 billion for this single indication. However, Gilead and Galapagos have their sights set on an even bigger payday.

The duo hope that filgotinib's emerging safety profile will prove superior to the other JAK1 inhibitors indicated for rheumatoid arthritis, which has the potential to transform this drug into a megablockbuster product in short order. EvaluatePharma, for instance, has filgotinib's net present value pegged at a stunning $6.6 billion, although this estimate assumes the drug's label will include other high-value indications beyond rheumatoid arthritis.

Gilead signed a global partnering deal with Galapagos in 2015 to develop filgotinib for a variety of anti-inflammatory conditions. This nearly $2 billion licensing agreement included a sizable equity stake, milestone payments, as well as tiered royalties on future sales of the drug.

The rather generous nature of this licensing agreement seems to indicate that Gilead might have designs on simply buying Galapagos at some point down the road. Gilead, after all, would be wise to maximize filgotinib's commercial opportunity in light of its various clinical setbacks and the underwhelming performance of its immuno-oncology unit to date. That's not to say that a buyout is imminent, but it is an issue shareholders should have in the back of their mind following these impressive top-line readouts.