Verizon's fast new network will mean more revenue per user, more opportunities in the IoT, and a chance to cement its leadership position in the U.S. telecom market.

5G cellular networks will be lightning fast. Recent independent speed tests showed that Verizon Communications' (VZ 0.28%) new 5G network -- currently only operating in Chicago and Minneapolis -- reached download speeds of 634 Mbps. That's about 12 times faster than the telecom's average nationwide 4G LTE speeds. Verizon told CNET recently that its network will improve on those initial numbers over the course of this year, and has said before that its 5G speeds will eventually be 20 times faster than LTE.

All of the major U.S. carriers are already talking about their 5G networks, and some have begun limited rollouts. For its part, Verizon says it'll have 5G up and running in 30 cities by the end of the year. Here's how the company is going to benefit from it. 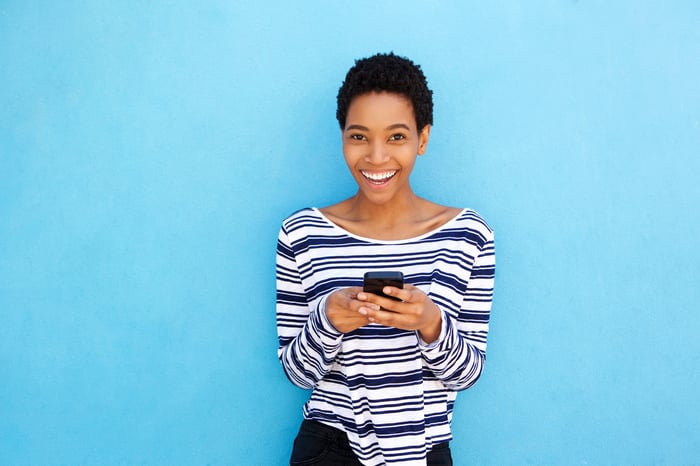 Verizon said last month in a press release that it will charge an additional $10 per month to its unlimited data customers who use the new 5G network. But because it isn't widely available yet -- and because so few smartphones on the market are 5G compatible -- it's hard to predict just how willing customers will be to pay more for it. Initially, Verizon will be offering the first three months of 5G service free to those who sign up.

Considering that the new 5G speeds are an order of magnitude faster than 4G, it's easy to imagine that a lot of Verizon's customers will shell out an extra $10 per month to keep those lightning fast speeds  -- especially when you consider that the individuals in question will already have had to buy new, top-of-the-line phones with 5G cellular modems to be able to access the network.

Beyond the opportunity to sell more expensive smartphone plans to customers, additional revenue potential will come from the Internet of Things (IoT). The IoT is connecting everything from smartwatches to shipping containers to the Internet, and the advent of 5G networks will give a major boost to this tech trend.

5G networks will be able to handle more IoT devices and make their cellular connections more reliable than ever before. Verizon says that construction sites, container ports, oil rigs, and other industrial services are increasingly connecting to the internet, and that the potential to benefit is huge.

The company's executive vice president of Verizon Wireless says that by 2023 5G will enable $12.3 trillion in global economic value. And at least part of this will come from new IoT services that are enabled through Verizon's 5G network.

3. It could help the company maintain its dominant position in telecom

Finally, Verizon will benefit from 5G simply be being one of the first carriers to bring its new network online. AT&T (T 1.67%) has been working on its 5G network as well, and recently said that it's live in 19 cities. The problem is that there aren't any smartphones on the market that work on AT&T's 5G network right now, so there's no real benefit for the company.

Verizon may appear to be launching its 5G network more slowly, but if the company meets (or even comes close) to its goal of flipping the 5G switch in 30 U.S. cities this year, it could surpass what its rivals are doing. That's because Verizon has partnered with cellphone companies to ensure that at least a few handsets can work on its network when it debuts.

Having first-mover advantage won't just help the company earn additional revenue now -- it could help lock customers into Verizon's 5G network for years to come. Verizon is already ranked as the top cellular network in the U.S. by RootMetrics, and as it builds out its new network, many smartphone users will likely come to view it as the de facto leader in this market.

One final thought for investors

It may seem like 5G is a marketing stunt right now, but that's because it's still in the earliest stage of its deployment. If you're skeptical about all the hype, read this. The one thing investors need to remember is that getting a new network up and running is a costly, time consuming, and challenging process -- the real benefits for carriers probably won't start to be felt until 2020.

But despite that, Verizon is making huge strides. At the end of this year, the company will likely have the most extensive 5G network in the country, and be well on its way to leading this new market. All of which is why tech investors need to keep their eyes on Verizon as it develops this opportunity.