But will they stick around after the 30-day free trial expires?

With the slowing sales of its flagship iPhone, Apple (AAPL -4.46%) is increasingly reliant on services for growth. The company recently released a host of new or improved devices to no fanfare whatsoever, but a litany of new services got their day in the sun during a signature Apple event last week. The company introduced an Apple-branded credit card, a video streaming service, a subscription gaming platform, and a news and magazine service dubbed Apple News+.

Many, myself included, wondered whether Apple News+ would be a game changer or too little, too late. In a somewhat surprising turn of events, the service amassed more than 200,000 subscribers in the first 48 hours alone, according to The New York Times. 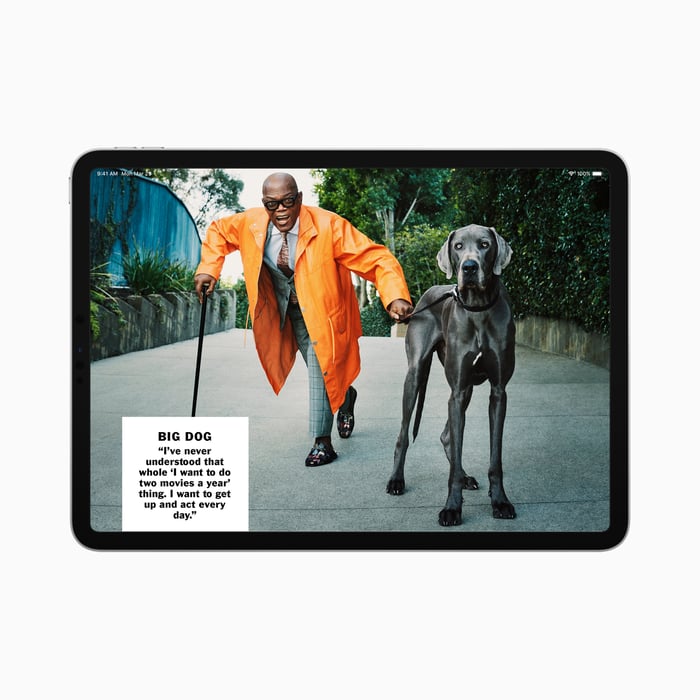 The Apple (News+ app) didn't fall far from the tree

The subscription news bundle was the only service introduced at last week's event that launched immediately. Apple News+ is headlined by The Wall Street Journal and the Los Angeles Times and provides access to more than 300 popular magazines and digital publications. Subscribers pay $9.99 per month ($12.99 in Canada) after a one-month free trial. The service will be available in Australia and Europe later this year, and will eventually roll out to a global audience.

The service is modeled after Texture, a digital magazine app Apple acquired early last year. The predecessor provided access to about 200 publications, so Apple is obviously upping its game hoping to attract a greater number of subscribers. The company plans to shutter Texture next month and likely plans to port its users over to Apple News+. It's not clear how many subscribers Texture has to date, but in 2016 its CEO John Loughlin estimated the figure to be in the "hundreds of thousands."

It's important to put this into the perspective of Apple's overall business. It'll be hard to move the needle considering the company generated $265 billion in revenue over the past 12 months. Even if every one of the 200,000 trial members signed on, it would still only result in an additional $24 million in annual sales, and that's before publishers get their cut. Still, it's an impressive metric in its own right -- particularly since it was achieved over the course of just 48 hours. But the pivot toward news marks an important trend in tech, as sizable peers like Facebook and continue to roll out their own news hubs in the name of information access.

This is still good news for the iPhone maker. Users of the free Apple News pore over 5 billion articles per month, making it the No. 1 news app. Additionally, Apple boasts 1.4 billion active iOS devices, and if even a small percentage of those join up, it could add billions of dollars to the company's annual services haul -- which grew to nearly $40 billion and 16% of Apple's sales over the trailing-12-month period.

It also seems to address the question of consumer interest and whether users would be willing to fork over another $10 per month for an additional subscription -- though we won't know for sure until the complimentary month has passed.

As part of the company's overall strategy to grow its recurring monthly revenue, however, it appears Apple News+ is off to a good start.