Here's how the pharma giant fits in with the latest outbreak and the city's major response.

It's been nearly 50 years since Merck (MRK -0.98%) first made a vaccine for measles, but parts of New York City are now under a public health emergency for the highly contagious disease.

The city's Health Commissioner Oxiris Barbot declared the emergency in a press release Wednesday morning. The order is for four ZIP codes in the Williamsburg neighborhood of Brooklyn, where more than 250 people have contracted the disease since last September. The emergency follows a similar one issued in March in Rockland County, a northern suburb of the city. Misinformation being shared among some members of the city's ultra-Orthodox Jewish community appears to be the reason behind the latest outbreak, according to The New York Times.

In New York's emergency declaration, the city said that everyone living or working in the four designated zip codes who hasn't already gotten the Measles-Mumps-Rubella (MMR) vaccine must get it in the next 48 hours, barring proven immunity or health exemptions. The city plans to levy $1,000 fines on people who refuse to comply.

Anyone who is found to be unvaccinated "creates an unnecessary and avoidable risk of continuing the outbreak and is therefore a nuisance," under New York law, the press release said. Though the move may seem drastic, Mayor Bill De Blasio defended it against potential legal challenges, according to The Times. "We are absolutely certain we have the power to do this. This is a public health emergency," he said. Other states, like California, have approached the matter by banning religious and philosophical exemptions for vaccines. 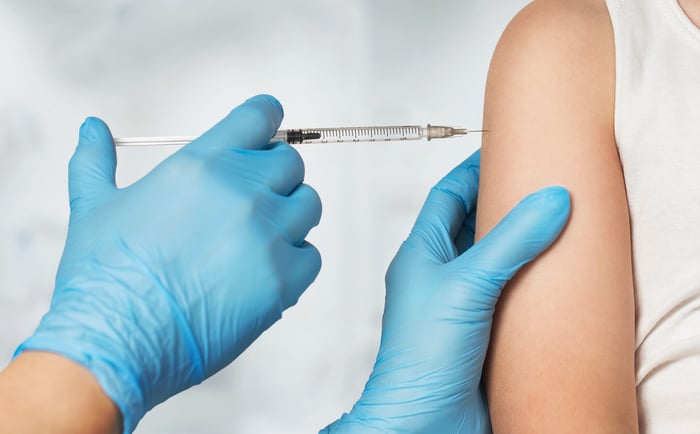 Merck makes two different measles vaccines, ProQuad and MMR II. ProQuad also treats varicella (or chicken pox), but otherwise they offer the same benefits. The private-sector price for ProQuad is $214.37, and $75.04 for MMR II, according to the Centers for Disease Control (CDC). The vaccines are highly effective in treating measles -- two doses are 97% effective.

Nearly 91% of American children and adolescents have been vaccinated for measles, though the percentage is much lower in the neighborhoods affected. About 310,000 people live in the ZIP codes affected by the emergency declaration. The order could prompt thousands of people to get vaccinated if they comply.

Amidst a rising "anti-vaxx" movement, New York isn't the only place in the U.S. to experience a measles outbreak. In the first three months of 2019, there were 387 reported measles cases in the U.S., more cases than any year since 2014. In developing countries, it's worse. In the Philippines, there have already been more than 200 deaths from measles this year.

According to The Times, a misinformation campaign targeting ultra-Orthodox Jews in Williamsburg is distributing pamphlets that provide false information including that MMR vaccines contain monkey, rat, and pig DNA, making them forbidden by on religious grounds (Most Hasidic rabbis believe vaccines are kosher.)

With emergency declarations and measles outbreaks, along with misinformation spreading rampant, now looks like an opportunity, or even a duty, for Merck to educate the public on its product by explaining how it works and why it's safe.

While Merck only stands to make a modest windfall from greater measles vaccine adoption, its reputation is what seems to be at risk here, especially if unfounded and dangerous backlash against safe and necessary vaccines continues to wage unchecked. New York's legal action here is is worth taking note of, and it will be interesting to see if other places follow suit in any future outbreaks.