It provides insight into the mind of founder and CEO Jeff Bezos, and it’s a must-read for Amazon investors.

One of the most successful companies over the past two decades has undoubtedly been Amazon.com (AMZN -1.65%). The e-commerce titan has been instrumental in reshaping retail, ushering in cloud computing, and popularizing the smart speaker.

The company released Jeff Bezos' annual shareholder letter on Thursday, which goes beyond the numbers and provides important insights into Amazon's strategy. It also provides a peek into the mind of its founder and CEO. While it's recommended reading for all Amazon shareholders, here are five important takeaways from the letter: 1. Third-party retailers are doing better than Amazon itself

Out of the gate, Bezos led with the growing success of Amazon's third-party retailers. Over the past 20 years, these merchants have increased their share of the company's total sales, growing from just 3% in 1999 to 58% in 2018. He characterized the change by saying, "Third-party sellers are kicking our first-party butt. Badly."

To put that into perspective, Bezos points out that Amazon's first-party sales have grown dramatically, from $1.6 billion in 1999 to $117 billion last year, a compound annual growth rate of 25%. At the same time, the company's independent sellers have collectively grown sales by 52% a year, from $0.1 billion to $160 billion. Bezos said this happened because the company provided independent sellers with "the very best selling tools we could imagine and build."

In order to succeed on a scale that will actually move that needle, businesses also need to scale the size of their failures. Amazon is "experimenting at the right scale for a company of our size if we occasionally have multibillion-dollar failures," he said.

The company works hard to minimize those failures, of course, and Bezos noted that "not all good bets will ultimately pay out," but Amazon must still engage in "large-scale risk taking." He used the Fire Phone and the Echo to illustrate what those failures and successes could look like.

3. Customers don't know what they want

Henry Ford, the founder of the Ford Motor Company, is credited with having said, "If I had asked people what they wanted, they would have said faster horses."  That sentiment was famously echoed by the late Apple CEO Steve Jobs, who said, "Customers don't know what they want until we've shown them."  Both quotes served to underscore the point that these revolutionary business leaders didn't believe in market research.

Bezos places himself firmly in the same camp and credits some of the company's greatest successes -- Amazon Web Services (AWS), machine learning, and Echo -- with the company culture of curiosity and exploration, rather than relying on market research. "No customer was asking for Echo," Bezos wrote. "This was definitely us wandering. Market research doesn't help." 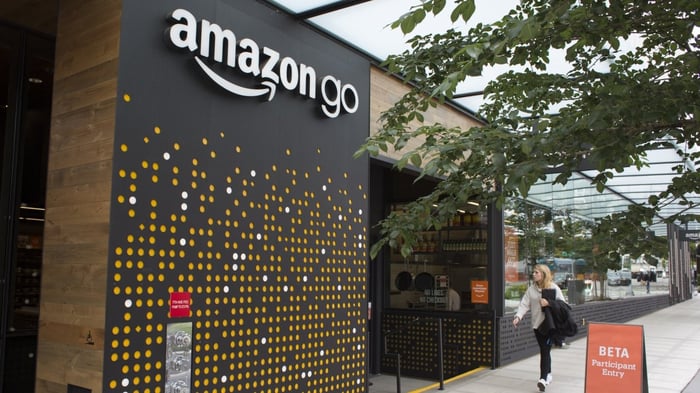 4. Amazon is still a small player in retail

While Amazon is the undisputed king of e-commerce in the U.S., its sales are still just a drop in the bucket in terms of global retail. "We represent a low single-digit percentage of the (global) retail market, and there are much larger retailers in every country where we operate," Bezos said. He also pointed out that 90% of retail still happens in physical stores.

That reality no doubt had Amazon debating the best way to effectively enter the brick-and-mortar retail market, and how it might serve customers in physical stores. This led Amazon to try to "get rid of the worst thing about physical retail: checkout lines. No one likes to wait in line," Bezos said. This resulted in the development of the company's cashier-less Amazon Go stores. There are currently 10 of these futuristic grocery stores, and the company has plans for as many as 3,000, according to reports.

5. A challenge to the competition

Late last year, Amazon announced it would raise its minimum wage to $15 per hour for all full-time, part-time, temporary, and seasonal employees across the U.S., a move that benefited more than 250,000 employees and over 100,000 seasonal workers. Bezos said, "We strongly believe that this will benefit our business as we invest in our employees." Even though the company had always offered competitive wages, "we decided it was time to lead -- to offer wages that went beyond competitive ... because it seemed like the right thing to do," he said.

Bezos issued this challenge to competitors: "Today I challenge our top retail competitors (you know who you are!) to match our employee benefits and our $15 minimum wage. Do it! Better yet, go to $16 and throw the gauntlet back at us." He went on to cite other Amazon programs that benefit workers, like paying 95% of employee tuition, and career programs that teach things like resume writing and computer skills.