Please ensure Javascript is enabled for purposes of website accessibility
Free Article Join Over 1 Million Premium Members And Get More In-Depth Stock Guidance and Research
By Daniel B. Kline - Apr 12, 2019 at 6:04AM

The retail giant insists that its latest automation push won't cost employees their jobs -- it will just spare them some of the drudgery.

Walmart ( WMT 1.51% ) has gone out of its way to promote its new in-store robots as tools that will free up its employees to do more tasks that involve interacting with customers, rather than as machines that will simply be taking people's jobs.

It's a valid spin, to a point, but as the chain automates more functions, one has to wonder how long it will be before it decides it doesn't need quite so many people after all. For now, though, that's a question the retailer wants to sidestep; the most recent press release on the subject was focused on how useful robots can be to its employees.

"Every hero needs a sidekick, and some of the best have been automated. Think R2D2, Optimus Prime, and Robot from Lost in Space. Just like Will Robinson and Luke Skywalker, having the right kind of support helps our associates succeed at their jobs," wrote Elizabeth Walker from Walmart Corporate Affairs.

Aside from throwing Optimus Prime in for no reason (he's no sidekick, and it's fair to argue that by coming to Earth, he brought the problems here that he then had to help solve) Walker has a point. Robots can be helpful. On the other hand, C3PO is fluent in more than 6 million forms of communication, which means he probably eliminated the jobs of a whole heck of a lot of human and organic-alien translators. 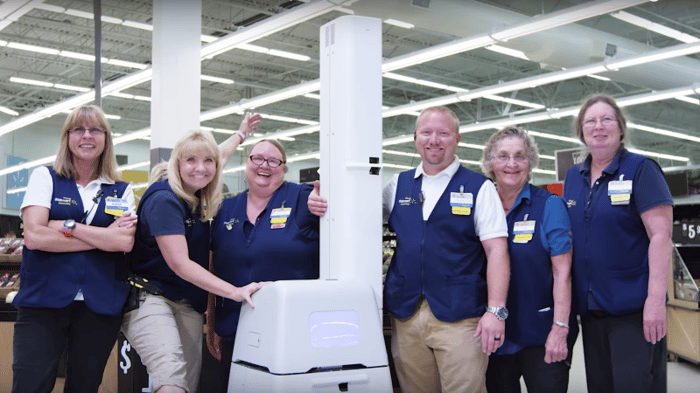 Walmart's robots may not be taking jobs from humans, but they will someday. Image source: Walmart.

Is a robopocalypse coming?

It's not as if history since the Industrial Revolution hasn't shown us the inevitable results of automation. Vacuum cleaners reduced the amount of person-hours required to clean floors compared to people using brooms and dust pans. The internal combustion engine made the skills of anyone who had worked with horses and wagons far less valuable -- though even without a "team," we still need teamsters. Walmart's efforts just continue a long tradition of taking simple, repetitive tasks away from humans.

"Smart assistants have huge potential to make busy stores run more smoothly, so Walmart has been pioneering new technologies to minimize the time an associate spends on the more mundane and repetitive tasks like cleaning floors or checking inventory on a shelf," Warren wrote. "This gives associates more of an opportunity to do what they're uniquely qualified for: serve customers face-to-face on the sales floor."

Walmart's automated helpers, however, can do more than clean the floors (though some can and will do that). Let's consider the robots the company has been testing:

That adds up a lot of work that no longer has to be done by people.

"Our associates immediately understood the opportunity for the new technology to free them up from focusing on tasks that are repeatable, predictable, and manual," said Walmart Senior VP of Central Operations John Crecelius in a press release. "It allows them time to focus more on selling merchandise and serving customers, which they tell us have always been the most exciting parts of working in retail."

Automation should lead to better customer service at Walmart. It will also lead to a need for fewer people working there, which will be a good thing for the company.

The advancement of technology has always forced workers to learn new skills or risk becoming irrelevant. The printing press put a whole lot of monks handwriting books out of work, and in more modern times, there's less need for cashiers because of various forms of self or automated checkout.

No matter how Walmart frames these moves, they're only partly about freeing up people to work on customer service. They're also about lowering labor costs. That's not a bad thing  -- and for investors, its a great thing. As cutting edge as it may feel now, in a few years robots trundling around retail stores will be as common as R2 units astronavigating in X-wings.

Walmart is innovating, but at least it appears to be doing so at a pace that gives the employees affected a chance to evolve their skill sets to suit them to new roles. Their alternative is to risk becoming as obsolete as a phone switchboard operator.