For more than two years, America (and its investors) have been waiting for President Donald Trump to make good on his promise to invest $1 trillion in rebuilding the nation's infrastructure. For the most part, though, we've waited in vain.

We've yet to see a serious push to get the president's plan enacted. In the latest fiscal year 2020 budget proposal, however, President Trump once again called for Congress to fund infrastructure spending to the tune of $1 trillion, rebuilding America's roads, bridges, and waterways.

And in what is perhaps a coincidence, today, Goldman Sachs is feeling bullish about Martin Marietta Materials (NYSE:MLM). 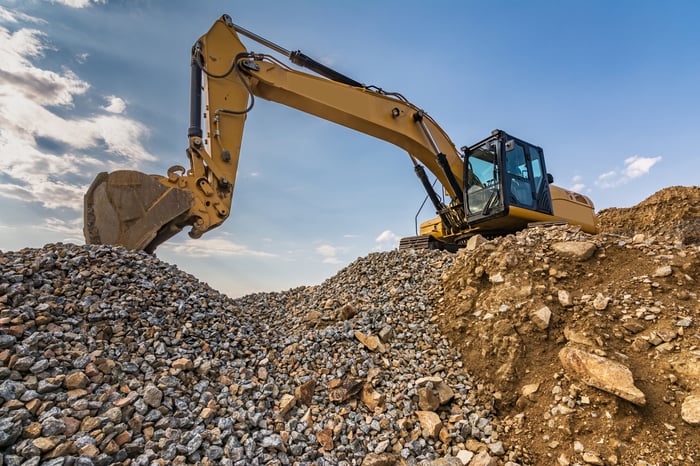 Why Martin Marietta is an infrastructure play

Martin Marietta is one of the nation's largest producers of aggregates -- crushed stone, gravel, and sand used in a variety of construction work, from road building to homebuilding. Aggregates sales account for 93% of the company's revenue stream, with the balance coming from a much smaller magnesia-based chemicals division. As such, Martin Marietta is the kind of company that should be expected to directly benefit from passage of a $1 trillion infrastructure plan to rebuild the nation's roads and bridges.

Sales at the company approached $4 billion last year, and have doubled over the last five years, and operating profits are up more than three times over that period, exceeding $690 million in 2018. (After taxes, Martin Marietta netted $470 million.)

This morning, analysts at Goldman Sachs upped their rating on Martin Marietta from neutral to buy and increased their price target to $232 per share.

TheFly.com has the details. While not directly referencing the president's budget proposal, Goldman Sachs predicts accelerating capital spending on infrastructure projects over the next couple of years. Combined with a predicted "steady recovery" in residential construction in the 2020-2021 time frame, the analyst expects this to create a boom in aggregates prices that will benefit Martin Marietta -- a nice change in sentiment after three straight years of analysts steadily ratcheting back expectations for aggregates.

Indeed, Goldman says we should be seeing higher prices for Martin Marietta's products as early as this year, combined with improved visibility into infrastructure spending.

Does this upgrade make sense?

Despite Goldman's optimism about Martin Marietta's prospects, however, I have to say that I'm dubious about its decision to upgrade the stock for two reasons.

The first, of course, is the stock's valuation. Goldman Sachs says Martin Marietta Materials is a buy and destined to sell for $232 a share within a year. But if you ask me, the stock is pretty pricey already at its current valuation of $207 a share.

That $207 a share works out to nearly $13 billion in market cap for Martin Marietta. Factor in a debt load of $3.1 billion net of cash, and the stock's debt-adjusted market cap is even higher -- just north of $16 billion.

Weighed against Martin Marietta's $470 million in trailing earnings, that gives us a P/E ratio of more than 34. Valued against the company's even weaker free cash flow ($250 million last year, or barely half reported earnings), the stock looks even more expensive -- certainly too pricey for a company that most analysts believe will struggle to grow earnings any more than 13.5% annually over the next five years.

On top of all that, I question the wisdom of investors who would buy Martin Marietta shares on hopes that Congress will pass an infrastructure plan this year -- after two straight years of making no such attempt, and in the face of divided government. After all, just yesterday we saw Merrill Lynch downgrade U.S. Steel on plummeting steel prices in the U.S. Given that steel rebar, like aggregates, is a key ingredient in building infrastructure, if there were a real prospect for near-term rising prices of infrastructure inputs, you'd think that steel prices would be rising in tandem with aggregates prices.

They aren't. And until they do, I wouldn't place too much faith in Goldman Sachs' prediction of an infrastructure boom -- or a boom in Martin Marietta stock.