Walt Disney's (NYSE:DIS) investor day was everything the media giant played it up to be. Disney talked up its upcoming branded streaming service for more than three hours, delivering on most fronts.

We know a lot more now about Disney+ than we did before the presentation started. Let's don our mouse ears and go over some of the important numbers that were revealed shortly after Thursday's market close. 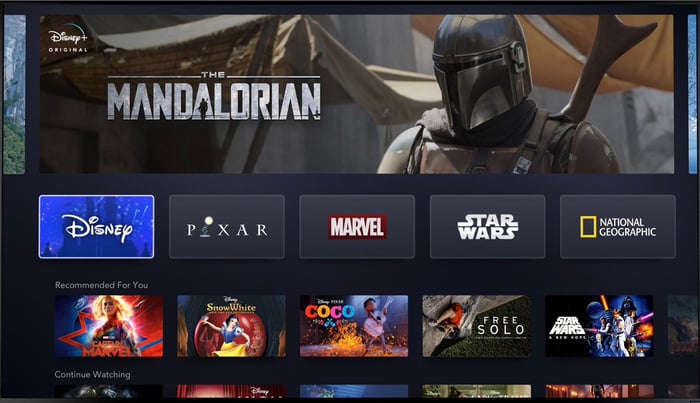 Disney said a year ago that it would be pricing its streaming service at a lower price point than Netflix (NASDAQ:NFLX), and it wasn't kidding. Disney+ will launch later this year, and the ad-free platform will set viewers back just $6.99 a month. Subscriptions will also be available at an annual rate of $69.99.

With Netflix recently boosting its price to $12.99 a month for its most popular plan, we're looking at a price point that is a little more than half of what the top premium service is charging. Disney is a premium brand in family entertainment, but it's hitting hard here with a strong value proposition.

There is a lot of exciting content coming to Disney+, but the final show announced that is coming to the platform turned heads. Disney closed its presentation by announcing that the first 30 seasons of The Simpsons will be available at the service's launch. Disney stood to gain a lot in the Fox deal that closed last month, and now we know that it isn't going to shy away from making some of those key assets available for its disruptive service.

Disney+ will launch in the U.S. on Nov. 12, and that is 214 days from today. The clock is ticking, and that will be just the beginning. Within two years, it will be available in every major region in the world. Don't sleep on the potential of this international push. Just as Netflix now has more subscribers outside of the U.S. than in its own home market, Disney+ expects to be there in a few years.

The new service won't be profitable right away. Disney CFO Christine McCarthy revealed near the end of the presentation that Disney+ won't be profitable until fiscal 2024. The platform expects to be spending $2 billion a year by 2024 on original content. The House of Mouse is not phoning it in here.

Disney's massive vault of content is going to get a workout. Within the first year of availability, Disney expects to have 7,500 episodes and 500 different movies on the service, and that includes 5,000 episodes and 100 films just from Disney Channel's library.

Some of these titles will be bigger than others. Within a year, all of the Star Wars movies will be on Disney+. As some of the more popular Disney flicks roll off Netflix, it will make Disney+ that much stronger than the competition. Several original movies and shows will also be staples on the service.

Fiscal 2024 won't just be the year that Disney+ turns the corner of profitability. Disney expects to have between 60 million and 90 million subscribers in five years, and for two-thirds of them to be international accounts. Disney -- more importantly Disney+ -- is going places.