Competition is about to escalate between these two entertainment juggernauts. Which stock should you buy today?

It never feels good to see your investments lose value, but market dips -- or "corrections," as Wall Street likes to call them -- can be the best time to pick up shares of great companies. Both Walt Disney (DIS 2.28%) and Netflix (NFLX 1.90%) have been very rewarding investments for longtime shareholders.

While Disney's stock has outperformed the broader market over the last decade, it's underperformed over the last three years, as Disney's media segment (its largest) has had a tough time finding growth due to cord-cutting. But with Disney launching its own streaming app next year, the Magic Kingdom may be about to shine for shareholders once again. Meanwhile, Netflix's stock price has more than doubled as its original content attracted millions of new members.

Let's see which of these two entertainment giants investors should buy today.

Despite the stock's underperformance over the last few years, Disney has continued to turn in solid operating results. In fiscal 2018 (which ends in September), revenue and adjusted earnings grew 8% and 24%, respectively, over fiscal 2017, led by a record year for the studios segment and strong guest attendance and spending at Disney's theme parks and resorts.

The House of Mouse is getting a digital upgrade with the new Disney+ app, rolling out late next year. While the app is not likely to be a "Netflix killer," it will be the exclusive place to watch all things Star Wars, Pixar, Disney, and Marvel. Considering that 60% of Netflix's 137 million members watch family content each month, Disney could generate billions in revenue from Disney+. Disney fans should find the service appealing, considering that management has hinted that the service will be priced cheaper than Netflix to account for the lower amount of content that will be available at launch. 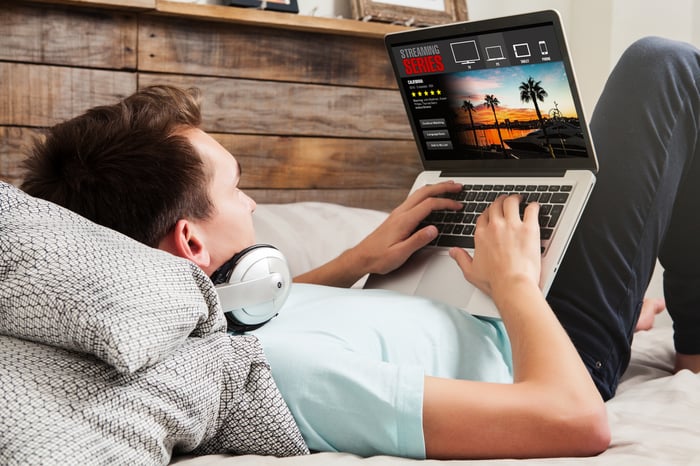 Meanwhile, Disney has already experienced early success with ESPN+, and the company has another strong slate of movies releasing in 2019. Disney will unleash more of its classics in the form of live-action versions next year, including Mary Poppins Returns, The Lion King, and Aladdin; they should be hits given how well live-action versions of Cinderella (2015) and Beauty and the Beast (2017) have performed. A new round of hits at the box office should keep a steady flow of traffic heading toward Disney's theme parks -- and the combination of theme parks and resorts with studios makes up the majority of the company's annual revenue.

Analysts currently expect Disney's revenue and earnings growth to be flattish next year, reflecting a transitional year with the Fox integration and the transition to digital services. Over the next five years, the consensus analyst estimate expects earnings to grow 8% per year. Shareholders should reap the benefits of Disney's strong free cash flow, which funds the company's share repurchases and dividends. The current dividend yield is 1.5%, and the stock trades at a modest forward price-to-earnings ratio of 15.2.

Shares of Netflix have delivered a staggering return of more than 6,000% over the last 10 years. Some investors probably thought they had missed out when Netflix shares were up over 1,000% from 2008 to 2013. But the stock is up over 400% in just the last five years.

The streaming video giant has seen impressive growth since it began producing its own original movies and TV shows around six years ago. When Netflix released its hit show House of Cards (2012), the company boasted a total member count of about 33 million, and as of the third quarter of this year, that count stood at 137 million.

With such a sizable audience and the first-mover advantage in streaming video, Netflix has built its competitive edge by collecting years of data on everything from what shows its members watch, to when they hit stop, play, and rewind. That granular data allows management to know not only the dollar value of each piece of content, but also which shows and movies it should create next.

There are plenty of qualitative reasons to own Netflix, but the big problem for investors considering buying the stock is that the company is burning a lot of cash to create new content. Since 2015, it's realized a cumulative loss of $7.6 billion in free cash flow. Among the reasons for this cash burn are the company's expansion internationally and management's desire to expand its catalog so that Netflix offers something for everyone.

More concerning, however, is that the company is starting to issue debt to finance these expenditures, which could be a red flag that management is getting too aggressive. Its long-term debt has more than doubled to $8.3 billion since 2016.

Debt isn't necessarily a problem for a business that generates recurring revenue through monthly subscription fees, but the issue here is that competition is about to heat up. Not only is Disney launching Disney+ and about to build up Hulu's content, but Apple is also planning its own streaming service. Apple -- and Amazon.com's Prime service -- both have huge cash resources to match, if not outspend, Netflix on content over time.

With all that competition, there may be no end to Netflix's spending. Recently, Netflix announced a new slate of animated content for kids and families scheduled for release from 2018 through 2022. That is clearly in preparation for competition with Disney+.

Another chink in Netflix's armor is that the company recently canceled a few of its Marvel series, including Daredevil and Iron Fist, which effectively hands the rights of those shows back to the owner -- Disney. My colleague Daniel Kline thinks that could be a major mistake, and I agree. Netflix may regret this decision down the road, since it just gives more reason for those disappointed Marvel fans to subscribe to Disney+.

Netflix may rein in the spending at some point, but for now, the cash burn is real. However, the company does consistently report positive net income. This is because the basic model of generating subscription revenue and investing in content is a very profitable one, given that the company's contribution margin (revenue less cost of revenue and marketing expense) is well above 30%.

But with competition heating up, there's too much uncertainty about how long Netflix will have to spend at the expense of generating positive free cash flow. Will the company lose a portion of those subscribers who regularly watch family content -- the ones who make up 60% of its member base -- to Disney+? Will competition cause Netflix to keep issuing debt to fund its investments? Those aren't easy questions to answer right now.

In contrast, Disney has generated $9.8 billion in free cash flow over the last year, and has arguably the most valuable content in the entertainment industry. Its shares trade for a modest valuation, and CEO Bob Iger seems to be on the ball with the company's digital transformation. For these reasons, Disney is the safer choice right now.