An investment lesson that I have had to relearn many times over the years: Just because a stock is cheap does not mean it's a good investment.

Since the beginning of the year, HP Inc's (HPQ -1.18%) stock has declined about 4% despite the S&P 500 index advancing almost 15% in that time. Investors found a lot to dislike in the company's 2019 first-quarter earnings release, sending the stock into a tailspin that saw shares fall more than 15% in just a little over a month.

It's hard to argue with the market's reaction. The company's revenue grew only 1% to $14.7 billion over last year's first quarter, though its non-GAAP earnings per share (EPS) did rise a more robust 8% year-over-year to $0.52. But it wasn't the company's tepid growth that sent investors running, it was the troubles it is experiencing in its most lucrative revenue subset -- printing supplies -- that was the primary cause of concern. 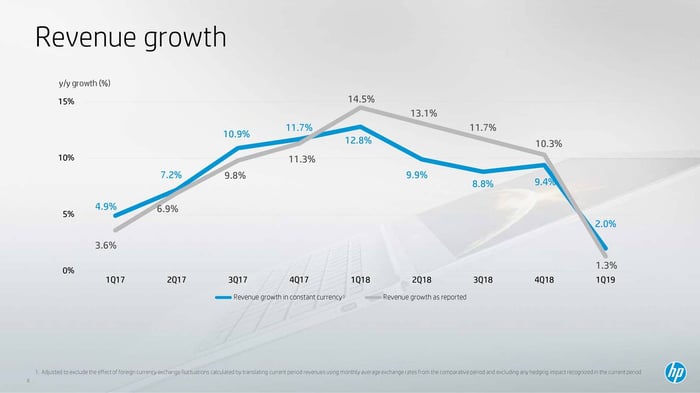 In fact, though I consider myself a long-term investor, and purchased shares of HP a scant 15 months ago at a cost basis of a little over $20 per share, I felt compelled to sell my shares because I now regard my original investment thesis -- that HP would manage to find innovative ways to capture enough additional market share in flat markets to catalyze a cheap stock price -- to be broken. 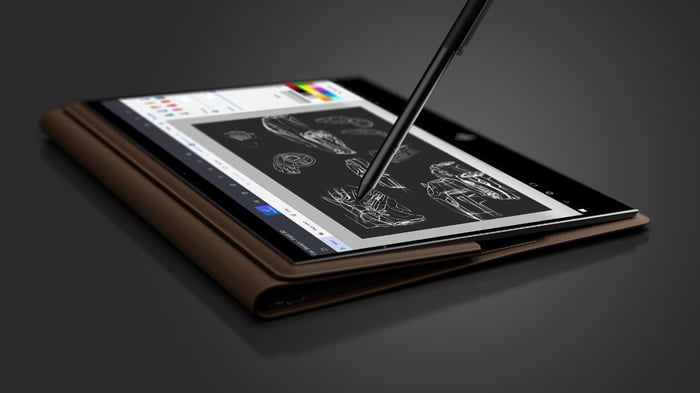 To his credit, HP CEO Dion Weisler didn't waste time or mince words when addressing the printing supply problem in the company's first-quarter conference call. In his opening remarks, he stated:

As you know we look at our supplies business in terms of our 4-box model: in store base, usage, share and price. The two factors that varied from our plan were a decline in share and to a lesser extent pricing. We saw this most significantly in our commercial channels, which is having the largest impact on office supplies. There are several factors contributing to the change in customer purchasing behavior. All commercial customers are purchasing supplies online and while we have leading share online, it's at a lower percentage than our share with traditional commercial resellers and in-store retailers.

To fully grasp why this is so potentially devastating to HP, one must understand the company's business model.

But, while the majority of the company's revenue comes from selling computer hardware, most of its profits come from selling printers and printing supplies. That's because personal systems sports a razor-thin operating margin, only 4.2% in Q1. Contrast that with the printing division's operating margin of 16.2%, a much healthier rate, and one can see why the printing division produces about twice as much profit as personal systems despite generating less revenue.

Breaking it down further, we see that the vast majority of printing revenue comes not from printers, but printing supplies. In fact, in Q1, supplies accounted for a whopping 65% of the segment's revenue. Traditionally, this classic razor-and-blade business model worked wonderfully, allowing HP to increase printer sales by lowering prices and then make profits on the back end, selling expensive ink cartridges to its customers for years after the original printer sale.

With the introduction of cheap, online third-party printing supply sellers, however, the entire business model has been disrupted. The fact that this disruption is directly affecting the largest portion of HP's most profitable division underlines the devastating effect this could ultimately have on the company's bottom line.

Yet even this bleak picture does not capture the full magnitude of the problem. Indeed, it was not until I read fellow Fool contributor Timothy Green's breakdown of the vast difference in price between what customers can pay third-party sellers and HP's own prices that I really understood the depth of the problem HP now faces. The price differences are far from nominal. These websites offer compatible cartridges to some of HP's most popular printers at a fraction of the cost of an HP-branded cartridge.

HP finds itself in a difficult situation. That's not to say it can't find its way out or that the stock price will not appreciate. HP management is seeing "strong adoption rates" for its ink subscription services. The company is also now selling products that can capture more of their lifetime profitability at the time of sale, such as the HP Smart Tank and Ink Tank models that can print more than 8,000 color pages before needing ink refills.

That being said, I would encourage investors to see how much these initiatives actually offset the disruption to HP's printing supplies business before buying shares. Shares are currently cheap, trading at a forward P/E ratio of just 9.1 based on the midpoint of its full-year 2019 EPS guidance, but, at this time, shares could very well prove to be a value trap, rather than a value, which is why I sold my stake in the company last week.