GameStop (NYSE:GME) is betting esports can help turn around its declining business. As digital and online gaming eat away at its console-based video game retail model, the company is embracing the enemy by becoming a focal point for gamers to try out the newest titles and learn how to, well, improve their game.

The initiative definitely won't be an easy play. GameStop's stores already allow for such opportunities to a certain extent -- the impact has been minimal -- and their small size doesn't allow them to expand much further. Yet unlike buying into mobile phones and collectibles, esports is really in GameStop's wheelhouse, and it just may be the best move the video game retailer has to make its stores relevant once again. 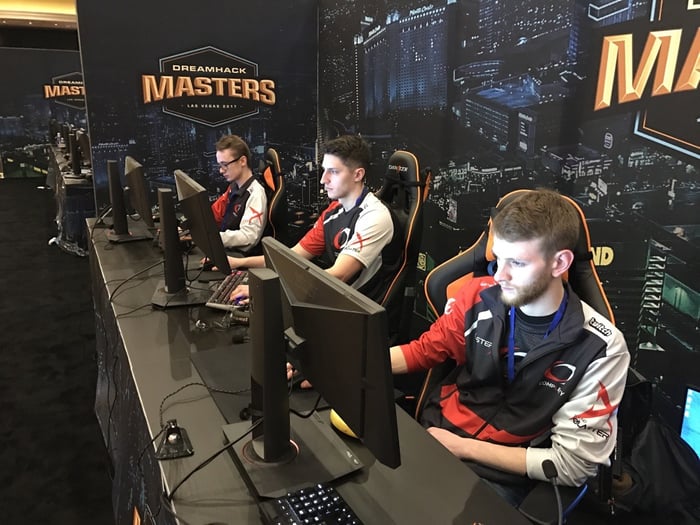 GameStop's fourth quarter earnings report was just about as bad as everyone expected -- its base continues to deteriorate, sales are still falling, and profits narrowed. Esports, though, with its large and growing audience, provides GameStop with a potential way out.

eMarketer expects esports viewers to grow by more than 52% between now and 2023, reaching over 46 million spectators. The report it issued last month also noted "beyond the confines of organized competitions, there's an even bigger world of players and fans of gaming video content."

That certainly provides companies like Alphabet's Google, which recently launched its Stadia cloud gaming platform, with the potential to monetize them since it speaks to an outside-looking-in consumer base, but it should also benefit GameStop since the gamers themselves are an even larger opportunity. Newzoo says gamers spent some $135 billion on games in 2018, and there's an estimated 2.5 billion gamers worldwide.

To tap into the market, GameStop announced a string of partnerships in the esports industry, most notably with leading esport team compLexity Gaming, where the retailer will serve as the team's title sponsor at its new performance center located in the home of the Dallas Cowboys -- The Star in Frisco, Texas. CompLexity is part-owned by Cowboys owner Jerry Jones.

The gaming retailer envisions the newly christened GameStop Performance Center, an 11,000 square foot public gaming area, to be a place "for player development while preparing the next generation of professional gamers."

GameStop also hooked up with the Envy Gaming and Infinity Gaming teams where they will collaborate on creating original content that will give amateur gamers access to exclusive materials and experiences from the respective teams.

Separately GameStop also envisions turning its stores into lounges of sorts, where gamers will come in to test out new titles. Instead of hanging posters about the games, the retailer will install televisions that will enable more gamers to play them. As comprehensive as the initiative is, there are some problems.

The explosive growth of esports has attracted a number of non-traditional outlets to explore similar partnerships to the ones GameStop signed.

GameStop stores are pretty compact at around 1,700 square feet, so opening them up for customers to come in and immerse themselves in gaming will be challenging. As previously noted, GameStop already provides for that sort of experience on a smaller scale, letting gamers try out titles in-store, and there's been no noticeable impact on sales. Adding even more stations for gameplay might not do much to attract more people to the stores.

Still, the overall plan has potential. The pell mell rush into esports by non-gaming companies is similar to what occurred during the big-screen TV upgrade cycle where retailers like Home Depot started selling LED TVs, or the smartphone craze where seemingly any ailing retailer with counter space turned to them for sales, including GameStop. For many of the companies, the fads did nothing to help their businesses -- GameStop just shed its Spring Mobile business -- and it's likely the esports mania will have similar results.

That may not be the case for GameStop. Because of its place in the industry, esports gives the video game retailer a competitive edge, and for all its faults and missteps, GameStop knows this business. It's possible that by transforming itself into a go-to location for team gaming and esports, GameStop locations could become places customers flock to to actually buy games and hardware once more.