There's nothing complicated at all about this approach to making a solid profit with one of the top big pharma stocks on the market.

AbbVie's (ABBV -0.76%) share price has grown by a compound annual growth rate (CAGR) of more than 15% since the company was spun off from Abbott Labs. But investors didn't see that kind of return in 2018, with AbbVie stock falling 5%. So far, AbbVie's performance this year has been even worse.

But there's a simple way that you could make a 10% return each year with AbbVie. And you can do so regardless of how well the stock performs. Sound too good to be true? It isn't. 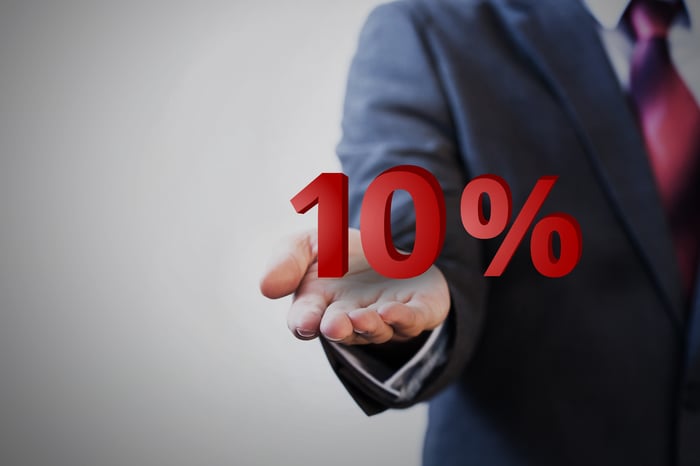 To obtain a steady 10% annual return from AbbVie requires only two simple steps. First, you have to buy the stock now. Second, you have to sit back and wait around seven years. At the end of the period, you'll probably have 10% returns on your initial investment for a long time thereafter no matter how AbbVie stock fares along the way.

One key ingredient to this strategy is AbbVie's dividend. Although the big drugmaker's dismal stock performance recently has been disappointing to shareholders, it's helped boost AbbVie's dividend yield to a mouthwatering 5.15%.

The other key ingredient is AbbVie's commitment to increasing its dividend payout. Including AbbVie's time as part of Abbott, the company has increased its dividend for 47 years in a row. Since its spinoff from Abbott in 2013, AbbVie has raised its dividend by a total of 168%. That translates to a compounded annual yearly dividend increase of around 15%.

There's a huge assumption in this simple strategy: AbbVie has to keep growing its dividend. How realistic is that assumption?

I don't see any problem with AbbVie's ability to double its dividend over the next seven years. First of all, AbbVie currently only uses 44% of operating cash flow to fund its dividend program. That gives the company flexibility to increase its dividend even if earnings and cash flow don't increase.

The good news is that earnings and cash flow almost certainly will increase. Some investors might be concerned about sales declines for AbbVie's top-selling drug, Humira, now that there's biosimilar competition in Europe. However, Humira's European sales won't evaporate. More importantly, more than two-thirds of the drug's total revenue is made in the U.S., where there isn't likely to be any direct biosimilar competition until 2023.

Even better, AbbVie expects to generate $35 billion in sales from drugs other than Humira by 2025. That's more than the company made in total last year. And unlike AbbVie's current dependence on Humira, its strategy for future success involves multiple drugs.

Blockbuster cancer drug Imbruvica should continue its momentum. Sales for Venclexta are expected to pick up significantly with the drug's approval as a first-line treatment for chronic lymphocytic leukemia (CLL). AbbVie also should benefit from strong sales growth for Orilissa in treating endometriosis pain and potentially in treating uterine fibroids in the future.

The company has a couple of successors to Humira waiting in the wings as well. Regulatory approvals for risankizumab and upadacitinib are expected this year. Both immunology drugs should become megablockbusters for AbbVie.

I think that it's quite possible -- and even highly probable -- that investors who buy and hold AbbVie stock will be looking at a 10% dividend yield based on their initial investment within a few years. It could even happen sooner than seven years from now if AbbVie boosts its dividend closer to its historic levels.

There's also an added bonus that I believe could be in store for patient investors. AbbVie's shares currently trade at less than nine times expected earnings. That's a bargain-basement price that could move much higher if AbbVie gets some good news, which I think is likely later this year.

Even if AbbVie's share price only grows by 5% annually, the company's strong dividend combined with that relatively weak growth would give shareholders a total return of more than 10% -- without waiting seven years. All you have to do is buy and hold this big pharma stock. It's a simple path to solid profits.